When I first took the Morgen out of its box, I was pleasantly surprised by its design. Unlike most Bluetooth speakers that want to look and feel portable, the Morgen is clearly designed to stay in your home, and blend in with your decor. It’s classy, it’s built out of aluminium, and it’s clad in a soft cloth, not unlike a Google Home speaker. 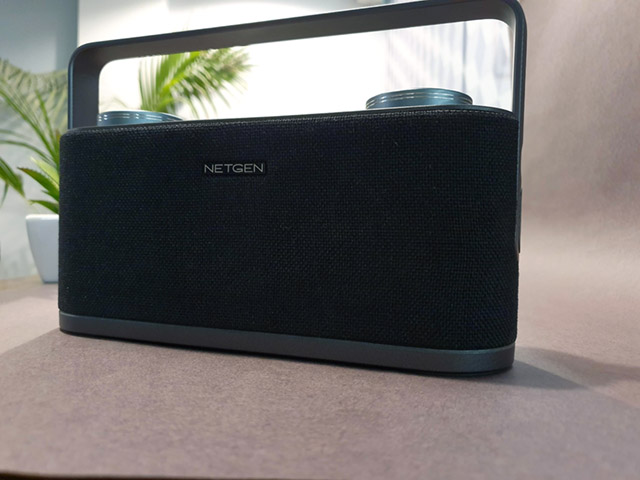 Even so, the Netgen Morgen is by no means a huge speaker, or a heavy one, or something that’s cumbersome to carry around. In fact, even though I personally feel that this speaker demands to fit right in your house, the handle up top makes it incredibly easy to carry around, so you can take it on trips and to house parties at your friend’s place.

Thanks to its aluminium build, the Morgen doesn’t ever feel flimsy or weak, or something you need to be very careful around. In my usage of the speaker, which ranged from using it at work, to stuffing it in my bag and carrying it home, it’s not suffered any visible damage, and that’s really very impressive. 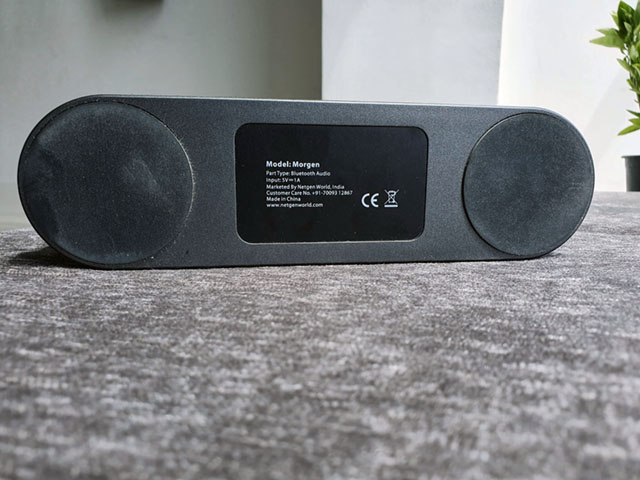 Netgen has also taken care of what could’ve been minor quibbles here; the bottom of the speaker comes with two big, round rubber patches to ensure the speaker doesn’t slip off your table, the Netgen branding, though placed up-and-center, is small-ish, and classier than what some other brands would’ve done. The only minor flaw I find here is the fact that the Morgen’s handle doesn’t fold over to make it easier to stuff into a bag; other than that, I’m very satisfied with the design and build here. 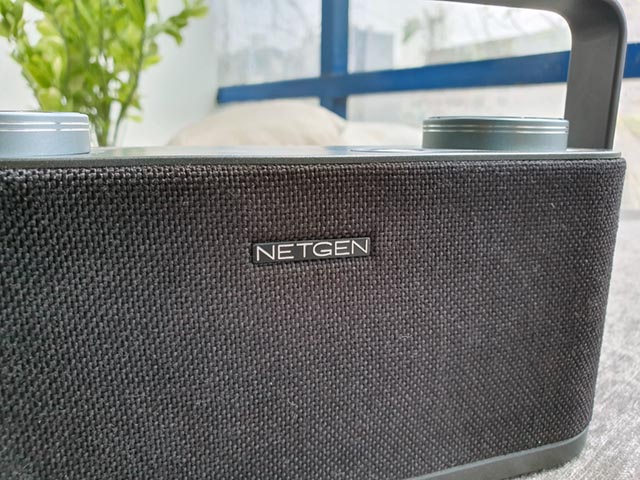 Even though the design and build of the Morgen is really amazing, audio is where the speaker really shines. With a size this big, I was anyway expecting a pretty good sound quality, but even with my higher than usual expectations, the Netgen Morgen blew me away. 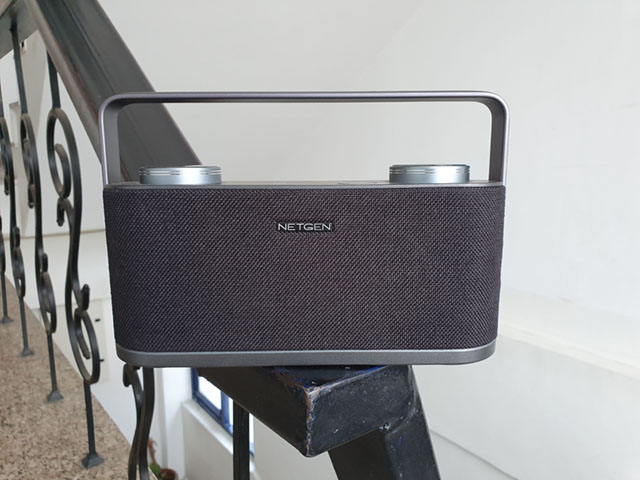 With two 10W speakers and two passive radiators, the Morgen can get pretty loud… really loud. However, loudness ceases to matter on a lot of Bluetooth speakers because they end up absolutely crushing the sound quality in exchange for loudness; not the Netgen Morgen, though. This speaker manages to sound amazing at all levels of volume. The bass doesn’t vanish at lower volumes, and the treble is always great. Even with the volume set to max, the speaker doesn’t distort, and it’s just overall a really great sounding package. What’s more, the soundstage is pretty wide, and music from the Morgen has a certain depth to it that is usually missing from a lot of Bluetooth speakers.

As if all that praise wasn’t enough for this speaker, the Netgen Morgen also comes with a bunch of additional features. Equalizers, for one. While the right dial on the Morgen is for adjusting volume levels, the left can be rotated to choose from one of four equalizer presets on the speakers. There’s Rock for when you’re listening to some classic rock songs, Jazz for setting the perfect evening with your significant other, Dance, and of course, there’s the Normal mode which works for everything. The active equalizer is illuminated by an LED light, so you’ll always know which setting you’re at. 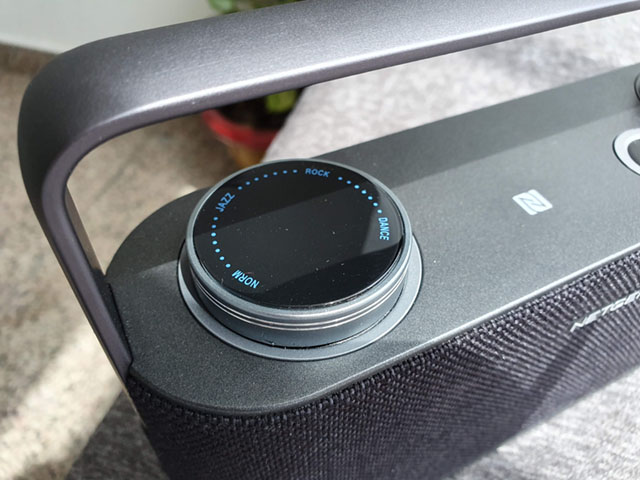 Meanwhile, the right dial has gesture-support. When I say gestures, it’s nothing fancy, but it definitely comes in handy. You can swipe left or right on the right dial to skip between tracks, and that’s pretty much it, but personally, I found this to be more intuitive and easier to do than pressing and holding on a button, which is what most other Bluetooth speakers do. 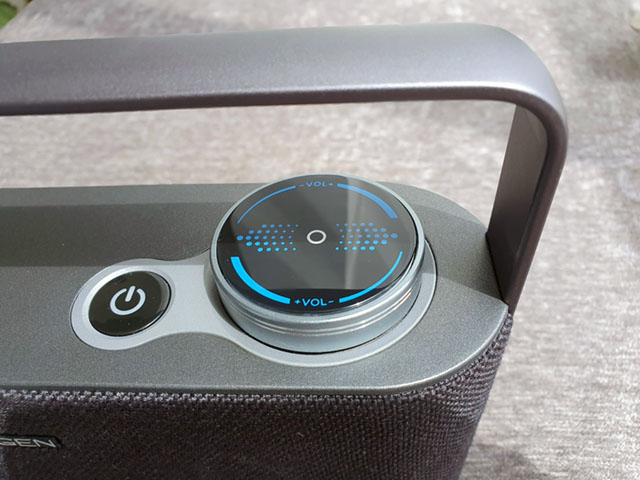 There’s also NFC here, which makes pairing your NFC enabled smartphone with the speaker a breeze. Just turn on NFC on your phone, turn on the speaker, and tap your phone on the spot where the NFC logo is, and that’s it, pairing started.

Then there’s the power button, which, again, does more than just one thing. Obviously, it turns the speaker on and off, but it also puts the speaker into pairing mode with a long press, and it plays and pauses music with a short press.

Moving on, the Netgen Morgen doesn’t really have a lot in the way of ports — there are only two here. There’s an AUX-in port, so you can pick up a 3.5mm cable and use a wired connection between your phone and the speaker. I’m not sure why you’d want to connect a Bluetooth speaker to your phone using an AUX cable, but it’s nice to know Netgen gives us the option. 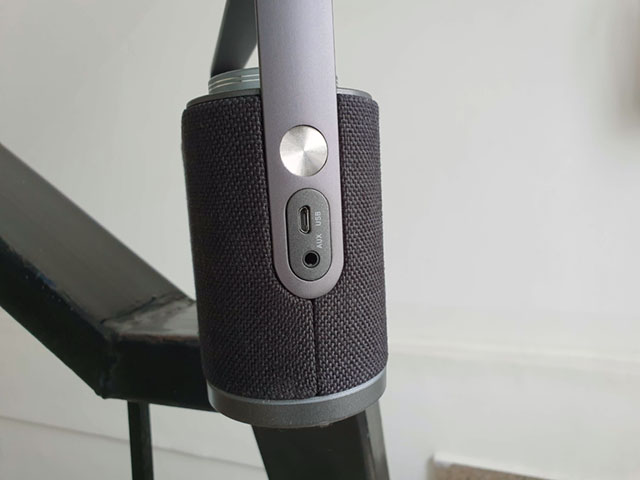 Other than that, there’s the microUSB port here, which, you guessed it, is meant to charge the speaker. I’m still uncertain why companies won’t move to USB-C on Bluetooth speakers too, but I’m holding out hope that we see that happen really soon.

Speaking of USB-C and charging, let’s turn towards the battery in this thing. The Netgen Morgen comes with a 5,000 mAh battery, which might sound big, but when it’s driving two 10W speakers, it’s only fair to have a battery that big. At around 70% volume, the Morgen lasts around 6 hours on an average, although you can comfortably use it at 50% volume most of the time and extend that by around an hour. It’s not a lot, but like I said, I personally feel that this speaker is better suited for in-the-home listening, which makes 6 hours sound pretty great. 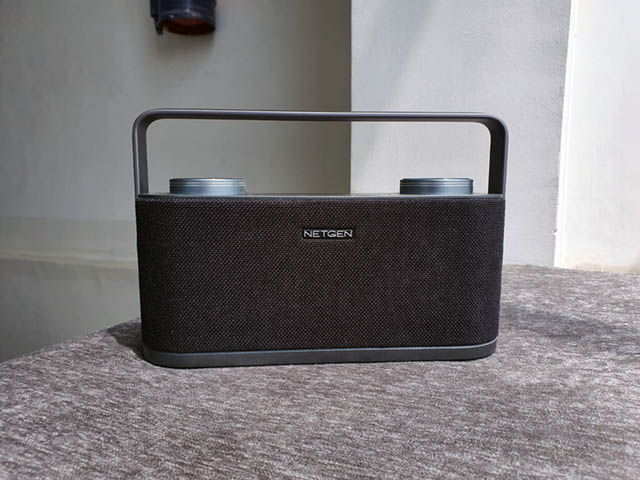 Charging takes place via the microUSB port, and according to Netgen, the speaker charges at 5V/1A — that’s 5W charging, similar to what you’d find on an iPhone XS with the bundled adaptor, but knocks at iPhone aside, the speaker takes almost 4 hours to fully charge, and then it’ll last you another 6 to 7 hours depending on the volume you’re listening at. If you’re wondering about the battery performance at 100% volume, your guess is as good as mine because as loud as this speaker gets, I couldn’t test it at 100% long enough for fear of the neighbours complaining against me.

In terms of connectivity, the Netgen Morgen comes with Bluetooth 4.0 — sad, I know, since most speakers at least come with Bluetooth 4.2 these days, but it does claim (and live up to) a 10m connection range, which is definitely nice. What’s a bigger bummer here, is that the speaker doesn’t support aptX — now personally, I don’t mind that because the sound quality here is definitely good, but hell if there was aptX support here, things would’ve probably been even better, right? 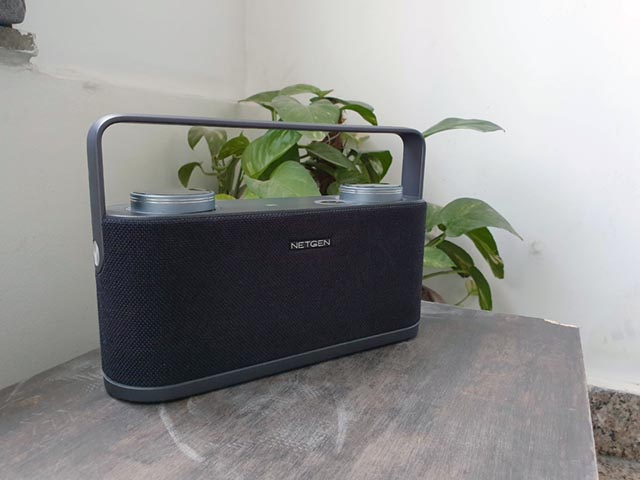 The Netgen Morgen is a pretty solid Bluetooth speaker, but as strong a contender as it is for being one of the best in its price, it does have some shortcomings too, so let’s take a look.

Netgen Morgen Bluetooth Speaker Review: Should You Buy It?

So, the Netgen Morgen is a pretty solid Bluetooth speaker. It brings great sound quality, a solid build paired with really nice design choices, and it looks like a solid speaker to consider. At Rs. 5,999, the Morgen does have some competition. There’s the JBL Flip 3, priced at Rs. 5,999, and there are a whole bunch of Bluetooth speakers from Sony in this price range as well. However, even with all of that, I would suggest you give the Netgen Morgen a try, because it’s honestly a really amazing Bluetooth speaker, and unless you want portability of the likes that is offered by something like the Sony SRS-XB12 (Rs. 3,650), the Morgen sounds better than most of its competitors.