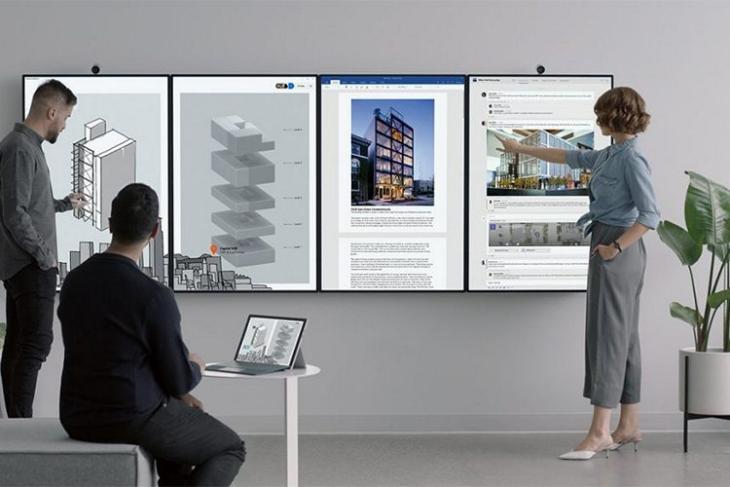 Microsoft has announced its second-generation Surface Hub whiteboard that incorporates a 50.5-inch panel with a 4K+ resolution. Unlike the first-gen lineup that included a 55-inch model and a massive, 84-inch, the company this year is seemingly announcing just the one model for the Surface Hub 2, although it will be interesting to see if there’s any new additions going forward.

Apart from the screen size, though, Microsoft has announced almost nothing noteworthy about its upcoming device just yet. All we know at this stage is that it will have a 3:2 aspect ratio with extremely thin bezels. There’s no word on the device’s pricing, no exact ETA and not even any hardware specifications that could have given us an idea about what to expect from the upcoming device.

The company however, says that the device will be launched commercially in 2019, and will be priced similarly to its competitors. Which means, the Surface Hub 2 could be significantly cheaper than its predecessor, which cost $9,000 at launch back in 2016. For context, the Google Jamboard, which was launched last year and is believed to be the biggest competition for the Surface Hub 2, is priced at $5,000. The Samsung Flip digital whiteboard, meanwhile, costs Rs. 3,00,000 (around $4,500) in India.

The device, like its predecessor, is expected to run a customized version of Windows 10, and have optimized software for Microsoft Teams, alongside far-field microphones and 4K cameras. Users will also be able to mount four of them together on a wall and link them to be used as a multi-monitor setup that the company is calling ‘Tiling’.

Microsoft has released a few images the product, revealing that it can now be rotated into a portrait position. The company also says that it is designed to be flexible and lightweight so that it remains portable and easy to move around an office without too much trouble. However, as you’d expect, there’s no word on the exact dimensions or weight just yet.