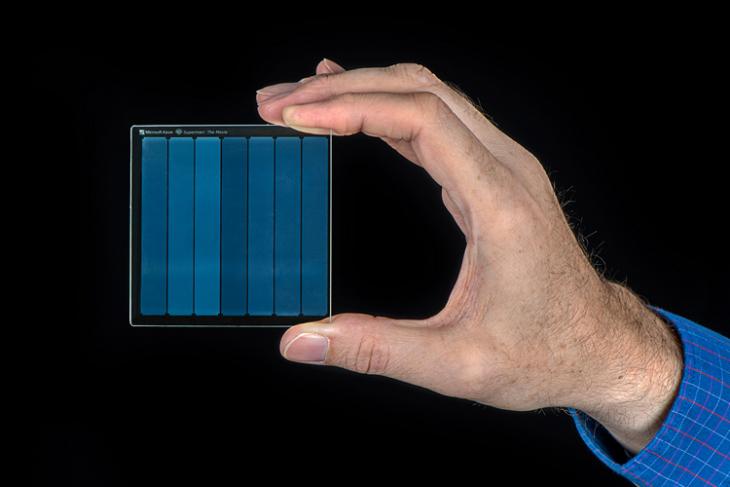 Microsoft recently collaborated with Warner Bros. to store the 1978 iconic “Superman” movie on a piece of glass made of quartz as part of Project Silica, Microsoft’s research project.

The glass measures 7.5 cm x 7.5 cm with 2-millimeter thickness and stores 75.6 GB of data along with error redundancy codes. Laser is used to encode data in the glass by creating “3D nanoscale grating layers and deformations at various depths and angles”. The encoded data is then read by Machine learning algorithms to decode them back to images and patterns.

In a blog post, Microsoft says their hard silica glass can withstand hot water. It can also hold out against being microwaved, flooded, scoured, and demagnetized. Incredible, I would say.

“Storing the whole ‘Superman’ movie in glass and being able to read it out successfully is a major milestone. I’m not saying all of the questions have been fully answered, but it looks like we’re now in a phase where we’re working on refinement and experimentation, rather asking the question ‘can we do it?’”, says Mark Russinovich, Azure’s chief technology officer.

As per Microsoft’s blog, Warner Bros. approached Microsoft to preserve its vast library after getting to know about Project Silica. The American entertainment company has been searching for a storage technology that would not suffer from degradation.

“That had always been our beacon of hope for what we believed would be possible one day, so when we learned that Microsoft had developed this glass-based technology, we wanted to prove it out,” said Warner Bros. Chief Technology Officer Vicky Colf.

Ant Rowstron, a lab director of Microsoft Research Cambridge who worked closely with University of Southampton on Project Silica says that this technology is entirely meant to be a permanent storage utility rather than being a new alternative to household cassette tapes or disk drives.

So, what are your thoughts on Project Silica and the idea of using quartz glass in a long-term data storage methodology? Tell us in the comments.