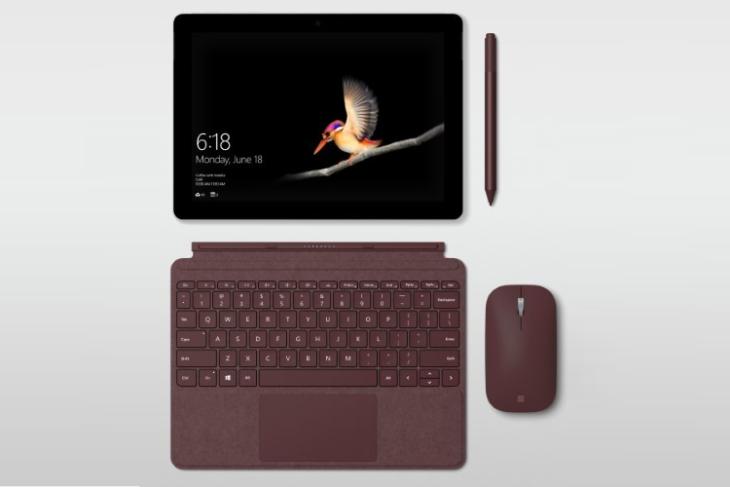 After teasing a new product on its official Twitter handle, Microsoft has finally lifted the curtain over the newest member of the Surface family, the Surface Go.

As announced by Microsoft, the Surface Go is a smaller, less powerful take on the popular Surface Pro. It packs in a 10-inch screen, an integrated kickstand, Windows 10, and a design that is similar to the Surface Pro.

Compared to the Surface Pro, the smaller 10-inch display has a resolution of 1800×1200 pixels, which is not bad for this size. It also has a weaker processor, packing in an Intel Pentium Gold 4415Y, which is a two-core, four-thread Kaby Lake chip. As for the RAM, there are two variants available, one with 4GB of RAM and the other with 8GB of RAM. In terms of storage you can get 64GB or 128GB, using an eMMC interface, and an estimated battery life of 9 hours. Microsoft’s proprietary Surface Connector port for charging and connecting to a desktop dock.

The device has the signature built-in kickstand with unlimited positions, which means you can use it at any angle you like on your table. There are two cameras – 8MP on the rear and a 5MP front camera which has Windows Hello facial recognition. The Surface Pro runs Windows 10 S out-of-the-box, but owners will be able to switch to full Windows 10 for free if they want.

For I/O, there’s a USB-C 3.1 port which is used for charging or outputting video and data to external devices. Microsoft will initially release Wi-Fi only versions of the Go, with LTE models slated to come later this year.

The Surface Go is priced at $399 for the 4GB+64GB and $549 for the 8GB+128GB. Similar to the Surface Pro, the Surface Go has an optional keyboard cover (available in four colors) and works with the optional Surface Pen. The keyboard will add another $99 or $129, depending on color, to your final bill, while the Pen is priced at $99. Lastly, there’s the $34.99 Surface Mobile Mouse, an ambidextrous, two-button Bluetooth mouse with scroll wheel.

At its price point, the Surface Go seems like the perfect competitor for Chromebooks and iPad users alike, allowing them to use Windows on a premium tablet with an ecosystem of accessories.