Imagine a situation where your iPhone is out of sight and you are trying to use “Hey Siri” to trace the device. Unfortunately, the iPhone is placed face down and therefore the virtual assistant can’t respond to the voice. Wouldn’t you feel annoyed at iOS for not offering the option to make Siri respond to voice when iPhone’s screen is covered? Most probably, you would. Thankfully, that’s the thing of the past! With the rollout of iOS 13.4, Apple has eventually offered a way to get Siri to respond to voice even when the iPhone is placed face down or the display is covered. Let me show how you can bring this well-timed feature into action.

Get Siri to Respond Even When iPhone is Placed Face Down

First and foremost, ensure that your iPhone or iPad is running iOS 13.4 or later. If you are yet to update your iOS device, head over to Settings -> General -> Software Update and then download and install the latest iteration of iOS. Do note that your device needs to be connected to Wi-Fi and have at least 50% battery.

1. On your iPhone or iPad, launch the Settings app.

3. Next, scroll down and hit Siri located under the General section.

4. Up next, turn on the switch for Always Listen for “Hey ‌Siri‌”. 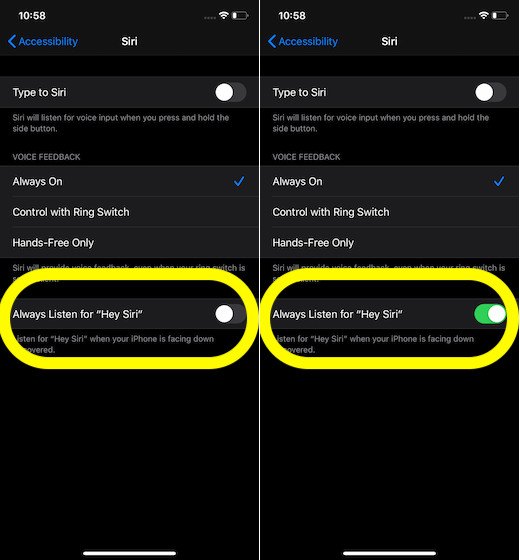 That’s pretty much it! Going forward, Siri will always listen to your Siri voice commands irrespective of whether the iPhone’s screen is covered or not.

Though this feature is quite helpful, at times you may want to turn off the “Always listen for Hey Siri”, especially when you wish to have some peace of mind during leisure times. To disable it, simply follow the same steps mentioned above and then turn off the switch in the end.

Make Siri Always Respond to Your Voice on iPhone or iPad

As we are talking about Siri, I would like to mention two notable features that have also rolled out recently. While the first is the ability to delete Siri dictation and history, the second one is the option to opt-out of Siri audio recording program. As a user, I really appreciate these features. What’s your take on these Siri improvements? Sound off your feedback in the comments below.