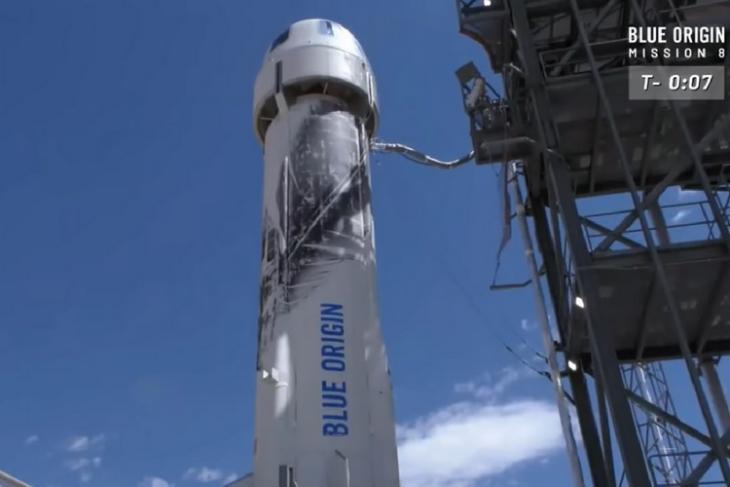 Blue Origin, the private space agency founded by Jeff Bezos which aims to take people on casual space trips, successfully launched its upgraded passenger spaceship, the New Shepard, from a test facility in West Texas yesterday. New Shepard also landed successfully, which marks a remarkable achievement for Blue Origin in many ways. This was the eighth successful test launch, and also took the passenger capsule to its highest altitude ever.

The Crew Capsule 2.0, which was launched aboard the New Shepard 2.0 rocket on Sunday, reached a height of 351,000 feet before successfully landing with the help of parachutes and retrograde rockets, while the rocket made a smooth vertical landing at its launch site.

Apogee of 351,000 feet (66 miles, 107 kilometers), and that’s the altitude we’ve been targeting for operations. One step closer. #GradatimFerociter @BlueOrigin

Sunday’s test launch also marks the second successful space journey of the New Shepard rocket which carried a payload including sensors provided by NASA. In addition, instruments on board monitored biological effects of microgravity on gene expression, along with equipment to test viability of delivering WiFi to a spacecraft.

Blue Origin is yet to send human beings on a space trip, but to test the feasibility of their ambitious plan, the space agency also seated a dummy astronaut inside the passenger capsule and gave it an awesome name – Mannequin Skywalker. Skywalker was equipped with sensors to study the effects of a space flight on humans.

Blue Origin is currently working on a reusable New Shepard rocket and spacecraft that will carry up to six passengers on brief space flights and aims to start piloted test flights later this year.