The iPhone XS launched last month to much fanfare — as is always the case with a new iPhone — and with Apple being boastful of everything about the new phone from its display, its cameras, to its battery, and speakers. While most of that can be dismissed as marketing and hype-building — after all, the iPhone XS still has the same display as the iPhone X, and it’s cameras are (potentially) still not as good as the Pixel 2 — one thing that can’t be denied is that the new A12 Bionic chipset has some serious power under the hood.

I’ve been testing the iPhone XS (starts at Rs. 99,900) for our full review, and in my usage of the phone, I’ve come across a bunch of things that go to show just how great this phone is, as far as performance is considered.

In order to test out the performance of the new iPhone XS, I put it through its paces with a bunch of benchmarks alongside last year’s iPhone X, the Galaxy Note 9, and the OnePlus 6 — arguably the most powerful Android smartphones of the year so far. Here are the results.

In Geekbench 4, the iPhone XS easily beat out the older iPhone X, the OnePlus 6, and the Galaxy Note 9. 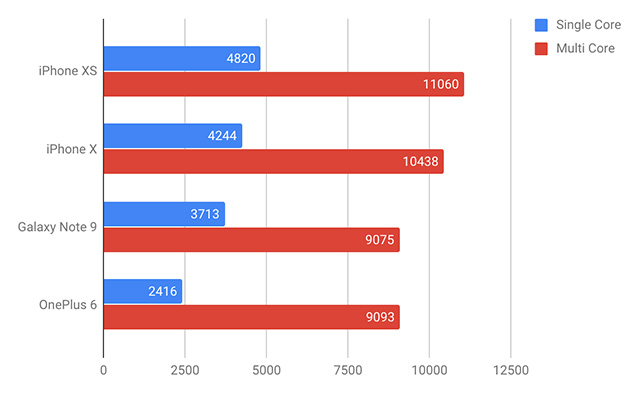 While the A11 Bionic is still ahead of Android smartphones (and that might change with the Snapdragon 855), the A12 Bionic takes it a lot further with amazing scores both in the single core test and the multi core test in Geekbench 4.

AnTuTu scores for the iPhone XS are pretty much unbelievable. They are well beyond the reach of any other smartphone out there, including the iPhone X (which surprisingly is well behind the OnePlus 6). 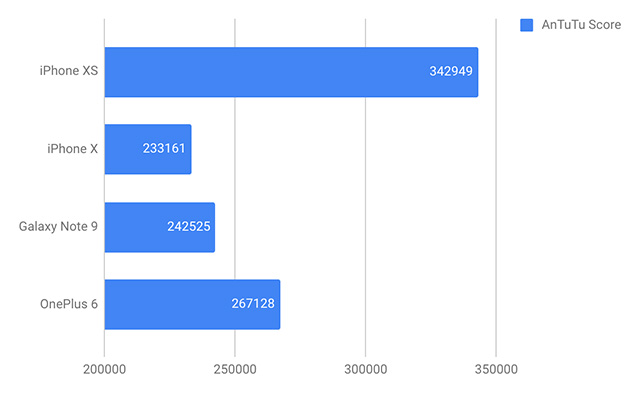 Look at that AnTuTu score for a bit. I’m unsure of how the iPhone XS fared this much better on AnTuTu, but it does, and I’m not complaining.

Okay, so the benchmarks tell a pretty promising story about the iPhone XS — it looks like a smartphone that puts everything else out there to shame. However, benchmarks rarely mean much in real world performance, and no app you’ll use regularly will ever actually stress your phone to the extent that a benchmark does, that’s why the real world performance of a smartphone is a more accurate (if subjective) view of how it performs.

In normal, day to day usage, the iPhone XS is snappy, smooth, and brilliant. The iPhone X is a snappy phone to this date, and thanks to iOS 12 it’s become even faster — the iPhone XS is even better, even though it’s by a relatively small margin. This is important, because even though the iPhone XS comes with a brand new A12 Bionic SoC, it won’t make as gigantic a difference in everyday usage as it does in benchmarks because the apps and games we have these days are not nearly intensive enough to actually make use of the entire processing power of the A11 Bionic, let alone the A12. 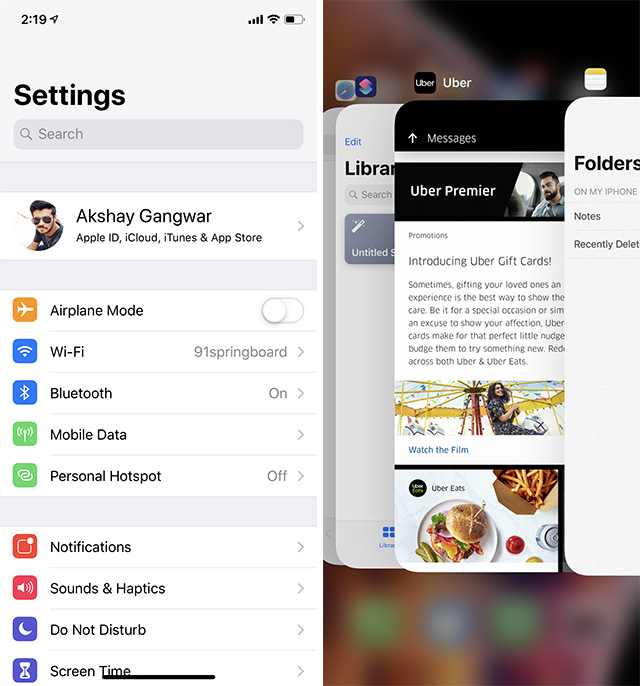 So yeah, apps launch faster on the iPhone XS, and switching between apps is a smooth experience, and one that I love. Plus the gestures and animations that iOS 12 uses are just way better than any other implementation I’ve seen so far on any smartphone out there. It’s great, and for a $1000, it had better be.

When it comes to gaming, the iPhone XS performs the way you’d expect a flagship to, regardless of its price. I played a whole bunch of games on the iPhone XS including PUBG Mobile, Fortnite, Asphalt 9, and Mortal Kombat X.

PUBG Mobile looks as though it hasn’t been optimised for the iPhone XS’ notch yet, because the HUD gets hidden. In fact, if you’re like me and you use the left-hand fire button more often than you ever use the right, I can guarantee you, you’ll die more often than you kill in War mode. That’s not to say that the performance here is bad. If anything, it’s pretty damn good. The game runs on Ultra frame rate, with HDR turned on (thanks to the HDR display on the iPhone XS), and it runs without a hitch.

As far as issues with the bezel-less display are concerned, Mortal Kombat X is probably the worst here. While it doesn’t hide any UI elements under the notch, it runs the game with gigantic bezels on both sides, which is, if anything even more annoying. If you can live with that, the game runs great on the iPhone XS, and I didn’t have any problems fighting through the many towers in the single player campaign.

A lot of people have been blaming the iPhone for not being able to run games properly on its bezel-less display, but it’s really up to the developers to push support for bezel-less displays on their games and apps. Take Fortnite for example — that game runs perfectly fine on the iPhone XS. All the elements show up perfectly, nothing is hidden by the notch, and by the way, the graphics on the iPhone XS are just a lot better than on any Android phone (including the Note 9, which is funny since it was a Note 9 exclusive, but whatever). I experienced no issues playing Fortnite on the iPhone XS, whether it was simply exploring, or getting into intense gunfights, the phone handles everything perfectly.

Asphalt 9 runs perfectly on the iPhone XS as well. The game has clearly been optimised for the bezel-less, notched display of the iPhone XS and it ensures that no UI elements are hidden. The game itself runs perfectly well, the animations look beautiful, and all of the Asphalt special effects just look stunning. There’s no lag anywhere, no matter what. It’s great.

The iPhone XS is definitely an impressive smartphone as far as performance is considered, the new A12 Bionic chip is a powerhouse, and even though the iPhone XS has 4GB of RAM, iOS optimisations mean you’ll never feel like that’s not enough. Whether you’re running heavy games like PUBG Mobile, or trying to complete weekly challenges in Fortnite, the iPhone XS handles everything like a champ and leaves no room for complaint.

Obviously, at $1000 you’d expect performance of this kind from a smartphone, and the iPhone XS doesn’t disappoint.