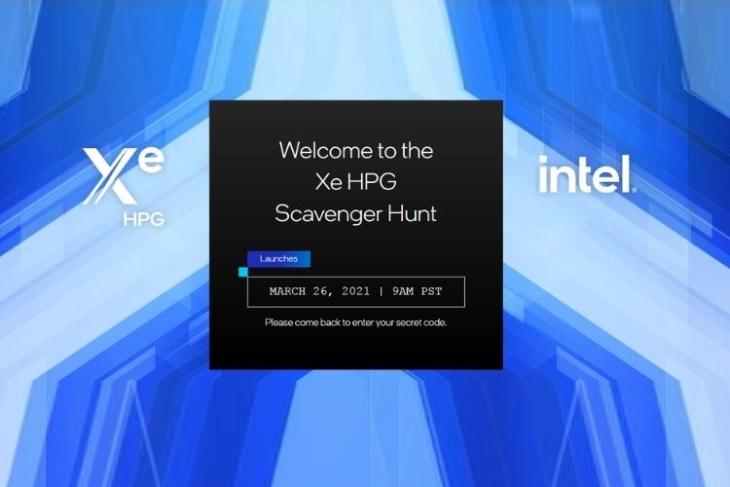 After unveiling the latest 11th-gen Rocket Lake-S desktop CPUs, Intel is now aiming to unveil its much-awaited gaming GPUs based on the Xe HPG architecture. The teaser for the upcoming Intel GPUs was found on a hidden website link Intel shared in its presentation for GDC 2021. This website leads users to a “Scavenger Hunt” and reveals that the Xe HPG-based gaming GPUs will launch on March 26.

The upcoming “DG2” graphics cards are designed on the higher-performance Xe HPG architecture. So, these should offer high-end gaming performance for users, posing a threat (maybe!?) to competitors like AMD and Nvidia in the market.

As per reports, one of the new Intel Xe HPG DG2 cards was spotted in a Geekbench listing recently. It features 512 EUs, 4096 cores, 1,800MHz clock speed, and 12.6GB of GDDR6 VRAM. Intel is reportedly also working on a complete lineup of GPUs based on the Xe HPG architecture. These will include cheaper, entry-level models as well as expensive, high-end GPUs for gaming enthusiasts.

Now, coming to the Scavenger Hunt, it is unclear whether Intel will launch them on March 26. There’s also a possibility that Intel’s new CEO Pat Gelsinger will announce the Xe HPG GPUs on March 23.

So, if that is the case, then the Scavenger Hunt might provide some additional details about the new gaming GPUs. Moreover, Intel could even offer to reward users with the latest GPUs on the said date. The company also released an official promo video for the upcoming GPUs. You can check it out right below: