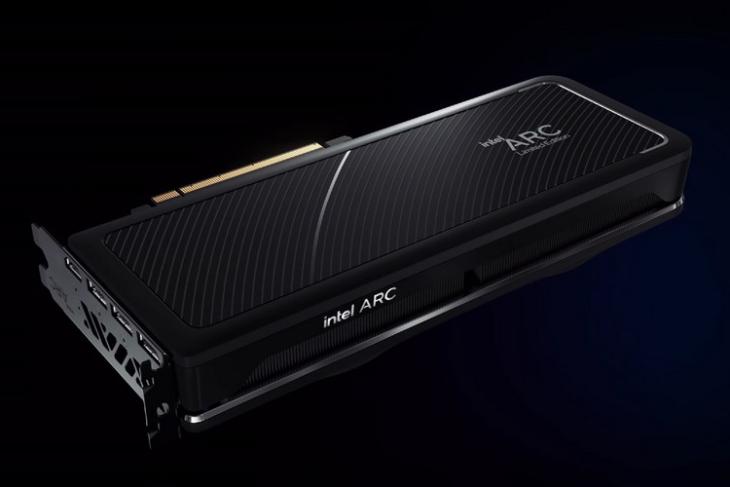 Since Intel announced to foray into the GPU market with its Arc GPU line to compete with AMD and Nvidia last year, we have seen many leaks and reports surrounding them. Following this, the company has finally shown off its first Arc desktop GPU in a new video, and it is slated to launch as a “limited edition” model during the summer of 2022. Intel has also announced the new mobile Arc GPUs alongside. Let’s take a look at the details.

After debuting the Arc laptop GPUs, Intel released an official video showcasing the Intel Arc A-series GPU for desktops. Although the company did not reveal much about the GPU, the video did show the design, the port placement, and more.

It is revealed the Intel Arc A-series GPU will come with dual fans along with a few ports on its left edge. These include an HDMI port and three display ports. Although Intel did not reveal the specifications in the video. You can check out the video right below.

Furthermore, the company is calling its Arc GPU for desktop a “limited edition” model. Hence, it is unclear whether Intel will manufacture limited units of the GPU or it is just a marketing term for the product.

Other than revealing the limited edition Arc GPU, Intel has also released two new Arc 3 GPUs for thin-and-light laptops. The Arc A350M and the Arc A370M mobile GPUs will soon be available in laptop models from OEMs like Asus, Acer, MSI, Dell, Lenovo, HP, and Samsung. These laptops will feature Intel’s 12th-Gen Alder Lake CPUs along with the Arc GPUs to deliver optimal performance for gamers and creators alike.

Intel also says that OEMs will be able to take advantage of its “Deep Link” technology to dynamically balance the CPU and GPU of their laptops to deliver power and performance based on different types of operations.

The Arc 3 GPUs support DirectX 12, variable-rate shading, and ray tracing. And as they are based on Intel’s High-Performance Gaming or HPG tier of the Intel Xe architecture stack, much like the 12th-Gen CPUs, combining the two can offer improved performance for certain video encoding and AI operations. While the Arc A350M packs 6 Xe cores, the higher-end Arc A370M comes with 8 cores. Now, thanks to the higher core count of the Arc A370M, Intel says that the GPU will be able to deliver 60FPS at 1080p for most high-end games in the market. These two also support the Intel Evo platform.

Now, as for the price and availability of the Intel Arc GPU for desktops, Intel is yet to reveal the details. Although it is expected to release sometime during the summer of this year, we do not have an exact launch timeline as of now. So, stay tuned for further updates and let us know your thoughts on the Intel Arc A-series GPUs in the comments below.