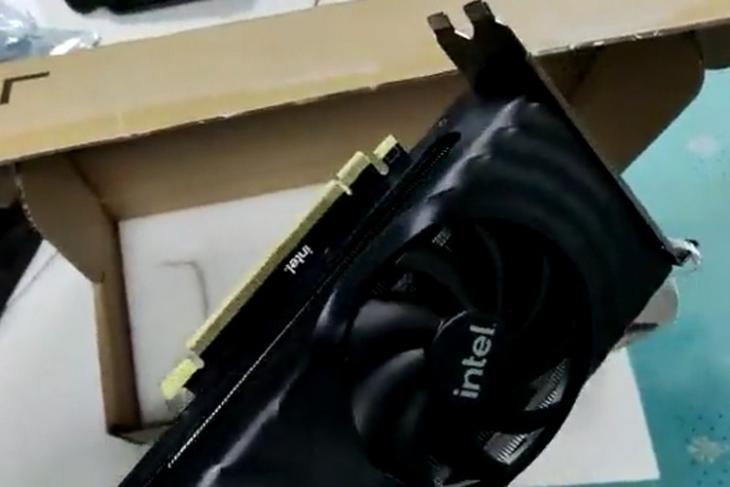 Following the initial announcement in August 2021, Intel started shipping its high-performance Intel Arc gaming GPUs to OEMs early this year. Although the company did not release any of its Arc GPU models in the commercial market, a recently-shared short video showcases an Intel Arc Alchemist GPU model in all its glory.

The video was recently shared by a Twitterati named Ayxerious and shows someone, presumably the Twitterati himself, taking an Intel Arc GPU out of a cardboard box. Although the video does not provide much information, it gives a good view of the GPU, containing four ports. You can check out the tweet right below.

Now, it is not the first time we have seen an Intel Arc GPU in the real world. Late last year, we saw some real-life images of Intel’s new gaming GPUs leak online. Comparing the GPU from the latest video to previously-leaked images, they look pretty different, color-wise. However, Ayxerious confirmed that it has been deliberately colored that way to hide the fine detail. It is to protect the anonymity of the source from whom they acquired the GPU.

Moving on, other than giving us a glimpse of the dual-fan design of the GPU, the video also shows that it might come with 8GB GDDR6 memory chips. So, if each of these is used with 2GB of memory modules, it will provide 16GB of VRAM to deliver extreme graphical performance. Furthermore, the video also reveals one HDMI port and three DisplayPorts on the right side of the unit. As per the recent leak, Intel’s upcoming GPUs are rumored to be the first to support DisplayPort 2.0.

As for the specs, Intel says that its upcoming GPUs will come with high-end features that can compete with Nvidia’s latest and greatest GPUs in today’s market. They will come with support for DirectX 12 Ultimate, hardware-based ray-tracing, mesh shading, variable-rate shading, and more. Plus, Intel has already confirmed that it will not limit the crypto-mining capabilities of the Arc GPUs.

Coming to the price, unfortunately, there is no information on the commercial prices of the GPUs as of now. However, Intel has reportedly started distributing prototypes to its partners, suggesting it is in the final stages of releasing the GPUs in the market. Although some believe that it could officially launch the Arc GPUs in Q1 2021, there is a probability that Intel might push it to the latter half of the year. So yeah, stay tuned for further updates, and let us know your thoughts on Intel’s upcoming Arc gaming GPUs in the comments below.