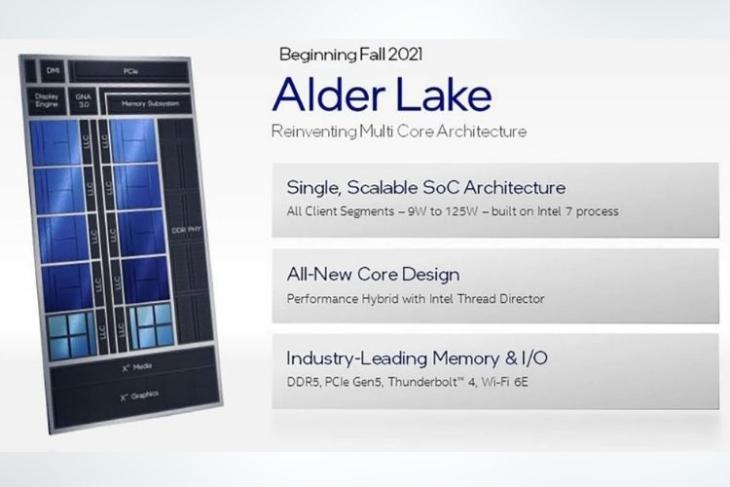 After unveiling its first high-performance Arc gaming GPUs earlier this week, Intel has announced its new 12th-gen Core CPU lineup at its Architecture Day presentation today. The new CPU line is codenamed Alder Lake and will be the first set of Intel chips to feature a combination of high-performance and low-power cores.

Now, the P Cores will be based on the “Golden Clove” architecture, while the E Cores will be based on “Gracemont” architecture. In the case of the Gracemont-based cores, Intel took a different approach with a physical silicone size and throughput efficiency to deliver multi-threaded performance to a significant number of individual cores. The P Cores, on the other hand, will be designed for speed and low latency.

Moreover, Intel’s Alder Lake CPUs will support Advanced Matrix Extensions for accelerating deep learning training and inference. Intel is calling this the highest-performance core it has ever built. The company also added that when the P and the E Cores are combined in the new Alder Lake processors, it can be highly scalable, delivering from 9W to up to 125W of power. Plus, the new CPUs will be able to manage 100Gbps of computing fabric per P core or a cluster of 4 E cores for a total of 1000Gbps between 10 units.

Furthermore, the new Intel CPUs for desktops will support DDR5 RAM, PCIe storage, Wi-Fi 6e, and Thunderbolt 4 ports. It will also pack an integrated GPU that will have up to 32 execution units for delivering basic display output and graphics performance. The CPUs will support up to DDR5-4800, LPDDR5-5200, DDR4-3200, and LPDDR4x-4266 RAMs.

Other than this, Intel also announced two mobile processors under the new Alder Lake lineup. One of these will feature 6 P cores and 8 E cores, and the other one will have an ultra-compact design with only 2 P cores and 8 E cores. Both of the CPUs will come with an integrated GPU with 96 execution units and built-in Thunderbolt controllers.

As for availability, Intel said that the desktop Alder Lake CPU will be shipped with PCs in the coming months. Other than this, the company also talked about its high-performance gaming GPUs, the first of which will be called “Alchemist“. It will be developed by TSMC and will start appearing in devices from early 2022.