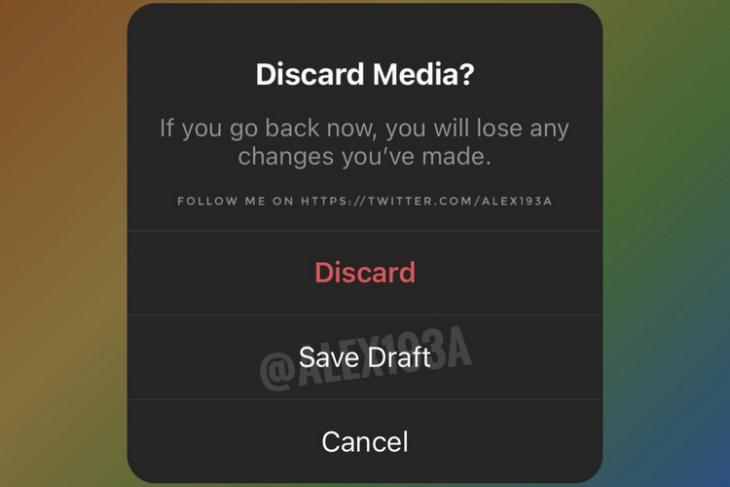 Instagram recently announced its plans to let users save incomplete stories as drafts. However, the social media company didn’t share a specific timeline as to when users should expect it. While Instagram continues to work on this feature, app researcher Alessandro Paluzzi has managed to enable the ‘Story Draft’ feature and has shared a few screenshots showcasing the feature in action.

After the feature becomes available, you’ll see a new ‘Save Draft’ option when you try exiting the story creation UI without posting the story. The option will sit between the existing Discard and Cancel buttons. All you have to do is press the Save Draft button and you can pick up right where you left off later.

Stories saved as drafts will not be visible to others until you post them. You can access your drafts collection in a new ‘Drafts’ section present right above the Camera Roll option. Take a look at the Story Drafts feature below:

At the time of writing this article, Instagram’s Story Drafts feature is not available to anyone, even those in Instagram’s beta channel. That said, we could expect Instagram to roll out the feature to the public in the next few days since the company has already announced the feature. The company is also testing an ‘auto-caption’ sticker to help you automatically caption your Instagram Stories.

While this new feature might not really be useful to regular Instagram users, it will undoubtedly be convenient for influencers, social media managers, and businesses to strategically plan their Instagram stories without much hassle within the mobile app. Do keep your Instagram app updated via the Google Play Store and App Store to be among the first to try the Story Drafts feature.