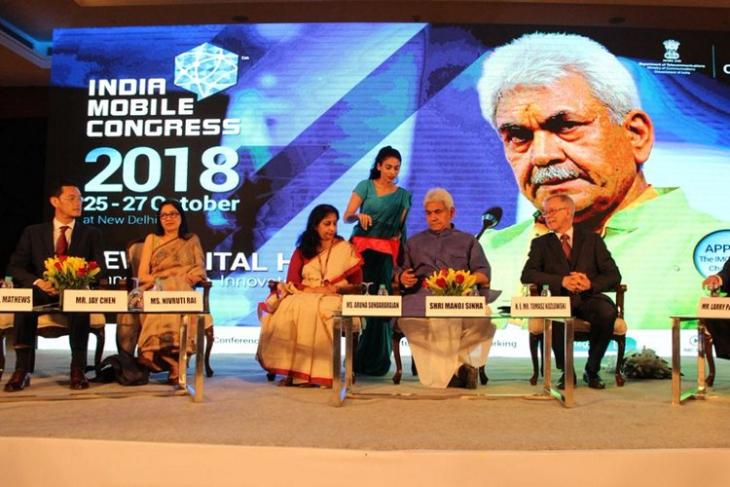 According to an official government of India press release, the second India Mobile Congress (IMC) 2018 event will be held from October 25-27, 2018, in New Delhi. This was announced earlier today by the Union Minister of State for Communications, Manoj Sinha. The event will be hosted jointly by the Department of Telecommunications (DoT) and the Cellular Operators Association of India (COAI) under the theme ‘New Digital Horizons: Connect, Create, Innovate’.

More than 1,300 exhibitors are scheduled to take part in the exhibition this year, and over 200,000 professionals from various sectors of the country’s tech industry expected to be in attendance. Delegates are expected from telecom, Internet of Things (IoT), Big Data, Artificial Intelligence (AI), Smart Cities, and other sectors. The first edition of the event was held last year at the Pragati Maidan in the national capital, with over 300 exhibitors and hundreds of startups from around the country in attendance.

While making the formal announcement about the IMC 2018 dates, Sinha described it as a great platform for stakeholders to debate, deliberate and discuss about policy issues. According to him, “The India Mobile Congress 2018 … is an excellent platform for policymakers, industry, and regulators to engage in meaningful deliberations to drive the future direction of this important sector”.

According to the press release, this year’s event will aim at “building ideas, forging lasting Industry relationships, showcasing leading-edge mobile technology and product trends and providing sectoral insights and impactful solutions”. The event will also see increased international participation, with exhibitors and delegates from ASEAN (Association of Southeast Asian Nations) and BIMSTEC (Bay of Bengal Initiative for Multi-Sectoral Technical and Economic Cooperation) regions.