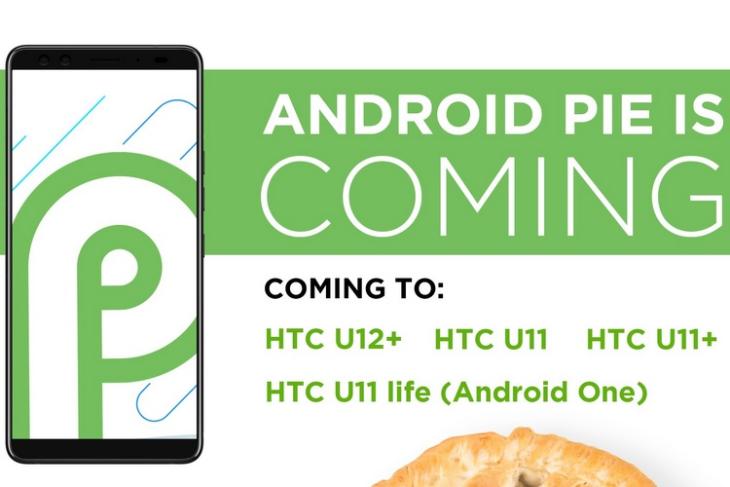 The stable build of Android 9 Pie begun rolling out earlier this week, and so far, no smartphone from any major company has received the update except Google’s Pixel line-up and the Essential Phone. While users are anxious if, and when, their smartphone will receive the Android P update, HTC has some good news.

Yesterday, the official HTC Twitter handle confirmed that Android 9 Pie will arrive soon on a bunch of HTC smartphones which include the company’s recent flagship, the HTC U12+, as well three other devices in the U11 series.

We're pleased as pie to confirm updates to Android Pie for the HTC U12+, U11+, U11, and U11 life (Android One). Timeframes for roll-out will be announced in due course.

We can't wait to know what you think of Google's freshest slice of Android! pic.twitter.com/mPJePFegne

As per HTC’s tweet, Android P support has so far been confirmed for only 4 smartphones- the U12+,  U11+, U11, and U11 Life (Android One). However, the company has not revealed any details regarding the time frame when the Android P update will begin rolling out for the aforesaid devices, but HTC has promised to reveal the update’s rollout timeframe ‘in due course’.

As for the company’s mid-range offerings such as the Desire series smartphones, there is no information regarding Android P availability for them, provided they are in HTC’s list of smartphones that will get the Android 9 Pie update.

As for other smartphone makers, Vivo confirmed just a couple of days ago that the company will begin the rollout of Android 9 Pie for its smartphone line-up in Q4 later this year. Huawei’s president for mobile phone product line, He Gang, recently revealed that the company is testing Android 9 Pie on the Huawei Mate 10 Pro, the Huawei P20, the Honor 10 and the Honor V10, however, it is not known when the public rollout begins.