Snapchat is a fun experience due to many reasons but at the base, it remains a photo messaging app that lets users send self-destructing photos & videos. The app has been designed to make sure that the pictures shared on the app cannot be stored without the sender being notified. Therefore, when a user tries to save a picture by taking a screenshot, the app makes sure to alert users when a screenshot is taken. When you take a screenshot, you and your friend both get a notification reporting a screenshot was taken. However, there is a workaround for that on Android which doesn’t involve installing any third party app and you can easily take a screenshot on Snapchat without notifying the sender.

Here’s how you can take screenshots on Snapchat without the other person knowing:

1. Firstly, make sure that Snapchat’s “Travel Mode” is not enabled and your phone is not in the battery saving mode. Both the modes pause background app activity and the snaps you receive will not be loaded automatically, which is important for this method to work.

2. When you get a new snap you want to take screenshot of, don’t open the app instantly. Instead, wait for a few seconds, so that the snap is automatically loaded in the background. Then, go ahead and turn off WiFi and mobile data.

3. Then, open Snapchat and view the snap and quickly take screenshot before time runs out.

4. After you have taken a screenshot, close the app and go to Android’s Settings->Apps->Snapchat->Storage and tap “Clear Cache“. 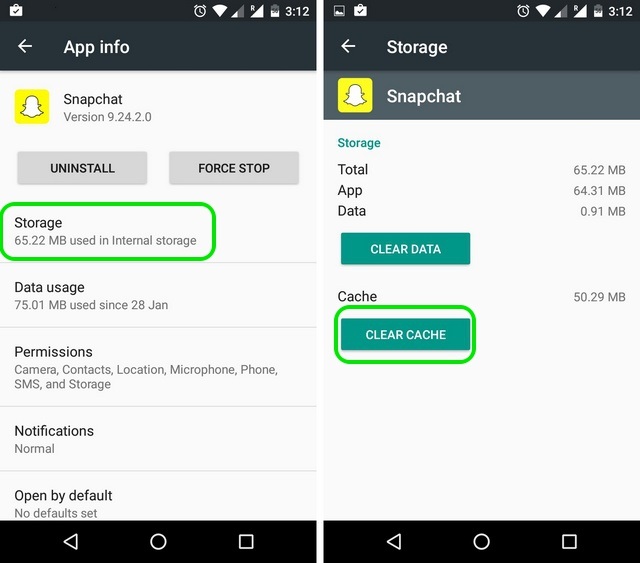 5. Once you’ve cleared Snapchat’s cache, turn on WiFi and use the app normally like you would and you will notice that there’s no screenshot notification neither on your app nor on the sender’s app. Normally, when a screenshot is taken, the sender and the receiver of the snap both get a notification saying “You/Friend took a screenshot”.

We have tested this method and it works flawlessly. Sadly, this method is only applicable for Android smartphones. For iPhone users, there’s a third party app dubbed Sneakaboo that lets you take a screenshot on Snapchat discreetly. There are a few other methods as well but those require you to jailbreak your iPhone. So, if you are an Android user, try out this simple Snapchat trick and let us know if you have any doubts.

There is another method to save snapchat photos on your device without the sender knowing about it. This method doesn’t involve any third party app and relies completely on Google’s Now on Tap functionality. Here’s how to go about it:-

1. This method involves the usage of Google’s Now on Tap feature, which was introduced in Android 6.0 Marshmallow. So, first, you will have to enable it. You can enable the feature in Settings→Google->Search & Now→Now on Tap.

2. After you have enabled it, the next time you receive a snap on Snapchat, just open the snap and press hold the home button to trigger Now on Tap. Then, hit the share button on the left to share the screenshot.

3. Then, select “Upload to Photos” to upload the snap to Google Photos. That’s it, the picture will be saved and the sender won’t get any notification of the screenshot.

Pretty neat, right? We tested the method for a number of times and it worked flawlessly.