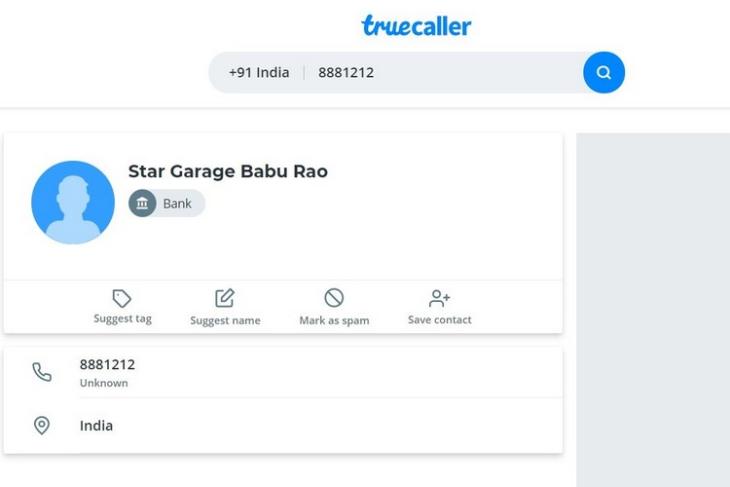 If you are an Indian movie fan and haven’t watched “Hera Pheri“, then are you really an Indian movie fan? On the other hand, if you have watched the film, then you are probably familiar with the phone number “8881212”. This phone number was the sole reason that caused chaos in the movie. Now, if you search for this number in Truecaller, you’d be surprised to find who it belongs to.

Surfing through Reddit, I came across a post by popular YouTuber and one of the most controversial stand-up comic, Tanmay Bhatt. In this post, the comedian shared a screenshot of the Truecaller ID associated with the number “8881212”. After witnessing the result, I actually laughed out loud. According to Truecaller, this number belongs to “Star Garage Babu Rao”! The comedian searched for the number in Truecaller after watching the film just the day before.

Now, if you haven’t watched the film, you won’t get the reference. On the other hand, for people like me, who grew up watching this marvellous film, this is a hilarious reference to witness.

So, for people unfamiliar with the film, let me give you some context. “Star Garage” was an automobile garage owned by the most comical character of the film, Baburao Ganpatrao Apte (Paresh Rawal). The number, 8881212, was actually the landline number of Babu Bhaiyya’s garage. However, according to the phone directory in the film, this number was associated with “Star Fisheries”, a fish trading company owned by a rich man named Devi Prasad (Kulbhushan Kharbanda).

The plot twists when Baburao gets a call from a kidnapper named Kabeera (Gulshan Grover) that was meant for the millionaire, Devi Prasad. So, this simple phone call marked the start of the hilarious plot of the film.

So, if you are a fan of this Priyadarshan-directed movie, I am sure you will (at least) giggle after seeing the search result for yourself. For the people who haven’t watched the film, I request you to go and watch it. You won’t be disappointed, I guarantee you.