Tesla cars are already ahead of the race when it comes to self-driving abilities. But if that’s not convincing enough for you, a team of ethical hackers turned a Tesla Model S into a vehicle that can be controlled using a brain.

Lorenzo Caoile, Casey Spencer, Vivek Vinodh, and Abenezer Mamo, hailing from California, hooked an EEG headband to the Tesla Model S for a hackathon competition. The competition compelled the team to create the telepathic car within only 36 hours.

The setup used the EEG headset to read signals from the operator’s brain who sat on the passenger seat instead of the driver’s seat. The headset converted activity in the regions of Spencer’s brain to commands like “stop” and “go” with the help of a standard remote controlled setup.

The team deployed a machine learning algorithm to convert the operator’s telepathic commands into analog signals for the car. In order to move the car, Spencer thought about tapping his right foot and to stop the vehicle he thought about clutching his left hand and making a fist. So, when he thought about either of the actions, motors in the setup engaged to change the way accelerator or brake pedals are operated. 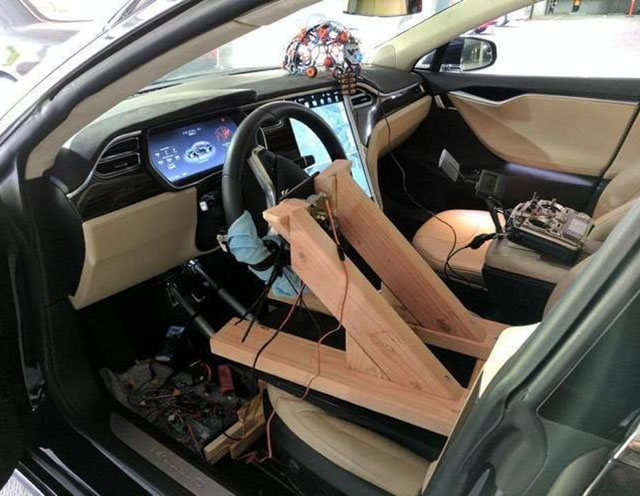 The steering was not actually controlled using the brain but instead manipulated using a gyroscope mounted on Spencer’s head. Based on how Spencer tilted his head, a motor synched with the gyroscope moved. The team also took care of safety and installed a dead-man’s switch to decelerate and eventually stop the Tesla Model S in case of emergency.

The telepathic Tesla (or “Teslapathic) won the third prize at the Cal Hacks hackathon. Back in 2015, Spencer had built a brain-controlled golf buggy for earlier versions of Cal Hacks. In the same year, he also established the record of going 550 miles on a single charge using a Tesla Model S.