Skip to content
Home Mobile Android Google’s My Tracks Shutting Down: 7 Alternatives To Use

Google has a habit of shutting down apps that many people love (Google Reader, Wave, Buzz etc.) and the trend continues. The search giant recently revealed that it’s shutting down its My Tracks mapping app come April 30, 2016 and that has surely saddened some loyal users of the app. My Tracks was launched back in 2009 and wasn’t necessarily a popular app but it had gained some religious followers, thanks to its map logging features. The ability to log routes certainly comes in handy when you are travelling or when you’re in a new city and you need to find your way back from where you came from.

There are a number of features that made My Tracks special including the ability to add markers, photos to a track, route stats like speed, distance, time and play tracks with satellite images on Google Earth. Furthermore, the reliability and less battery usage made the app a favorite for many users when it came to map logging. But the app wasn’t without its flaws like the stagnant interface, few fitness features, buggy Google Earth integration etc. For the past few months, it was obvious that My Tracks was nearing its end and well, it has turned out to be true.

Thankfully, there are some really good alternatives to My Tracks, which not only match My Tracks features but at times better it. There are a plethora of fitness apps available on the Play Store but only a few of them bring the GPS logging features that make them stand against My Tracks. 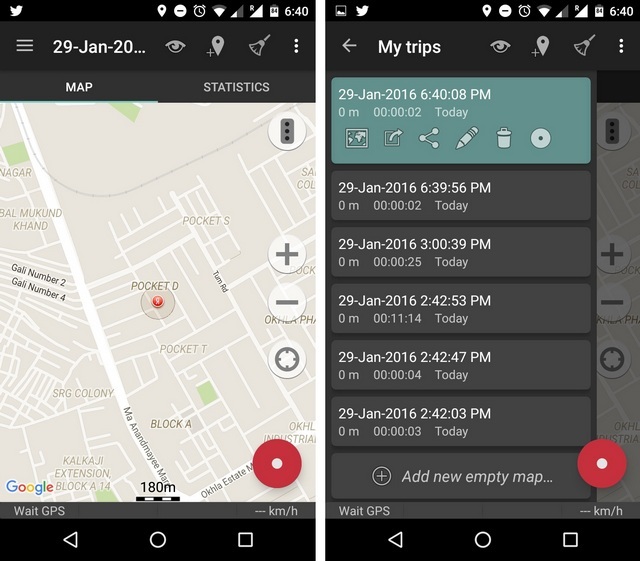 GeoTracker is arguably the most appropriate alternative to My Tracks. It is very similar to the Google app in almost all aspects, be it the interface, low battery consumption or the features. GeoTracker is based on the Yandex Maps API and brings features similar to My Tracks like map logging with markers along with stats like max & average speed, time, distance, altitude, slope etc. It records tracks in GPX or KML format, so you can view the tracks on Google Earth among other apps. It lacks support for Google Fit, Android Wear and Fitness sensors but if you want a simple offering to record your tracks then GeoTracker should be the perfect choice.

2. Walk With Map My Walk

Unlike My Tracks, Walk With Map My Walk is a very feature rich app that brings track recording and tons of other fitness aimed features. The app lets you record & log tracks and although you can’t add text markers, you can make do with photos. It brings you stats like calorie burn, pace, elevation, distance, time etc. Like My Tracks, the app notifies you when you complete a certain distance or speed. Other than that, the app is way more than just a My Tracks alternative with features like Gear tracker, 600+  fitness activities, activity graph, challenges and support for Google Fit, MyFitnessPal and number of fitness tracking devices like Jawbone, Fitbit, Garmin etc. 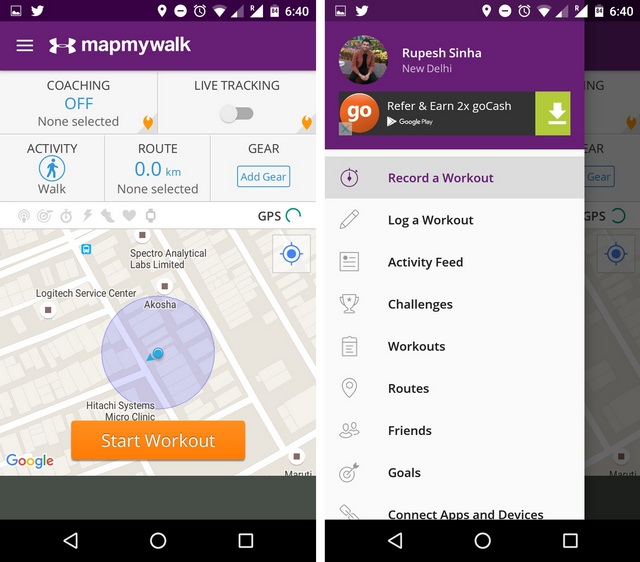 Walk With Map My Walk is available in a free version but there’s a subscription based MVP version, which brings live tracking, heart rate analysis, audio coaching and more. Map My Fitness, the company behind Map My Walk offers a host of other apps like Map My Hike, Map My Ride, Map My Workout etc. aimed at different activities, so you can give them a try accordingly.

As the name suggests, GPS Logger based on OpenStreetMap is aimed at people looking to log their tracks. The app is pretty simple to use with features strictly aimed at your GPS logging needs but it has its share of flaws. The battery friendly lightweight app runs in the background and lets you log a walk, hike or even a ride. While the app does not have a web view, it shows you your location with coordinates along with stats like altitude, speed, direction and accuracy. It also allows you to add markers and photos to your track. It supports different file formats for recorded tracks like GPX, KML, CSV, NMEA and plain text, so you can easily view it in other apps like Google Earth. 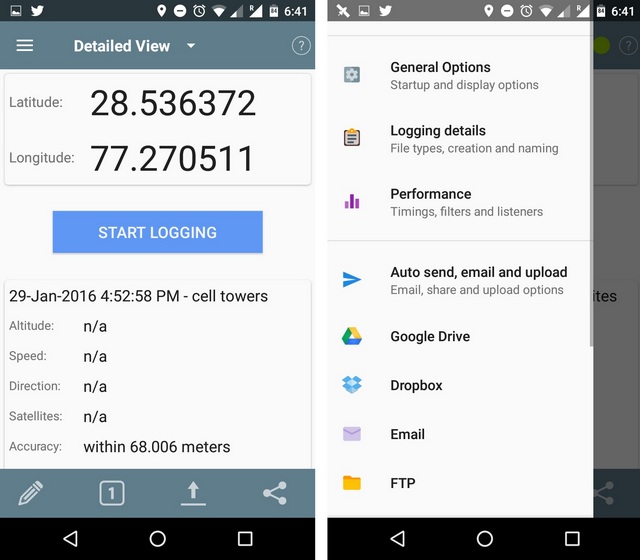 Moreover, it supports Dropbox, Google Drive, OpenGTS, FTP integration to let you share your tracks with ease. Unlike My Tracks, GPS Logger is fully featured logging app, so there are tons of other features. If advanced GPS logging is your priority and you can overlook not having a web view, you should give GPS Logger a shot.

Ride with GPS might look like an app aimed at cyclists but it is a solid GPS logging app as well, which makes it a My Tracks alternative. Unlike My Tracks, Ride with GPS features a modern interface, which looks simple and clean. The app lets you record tracks and add photos as markers along with bringing you stats like distance, duration, average speed, elevation gain etc. It saves recorded tracks as GPX, KML, or TCX files, so you can import it easily on another app like Google Earth and view it. 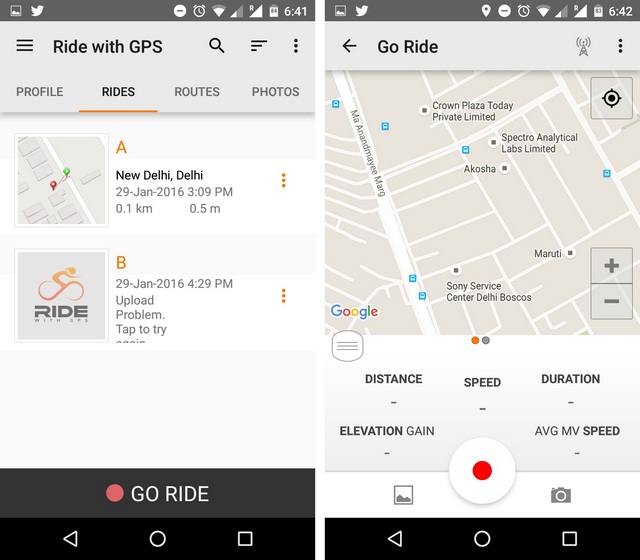 The app is available in a free version but there’s a Basic/Premium subscription that brings features like bicycle profiles, route navigation, live logging, offline maps and more. To sum things up, Ride with GPS works as a great GPS logging app with some unique features of its own.

Strava is a very popular fitness tracking app aimed at runners & cyclists and it brings a ton of fitness aimed features along with track recording & stats we’re used to from My Tracks. The app lets you record tracks and add photos although there’s no way to add markers. There are other features like auto-pause, audio cues, sensor support and live stats. The stats include distance, speed, pace, elevation, calories burned etc. along with a training log showcasing improvements. The feature packed app supports Android Wear watches that feature GPS and other fitness tracking devices. 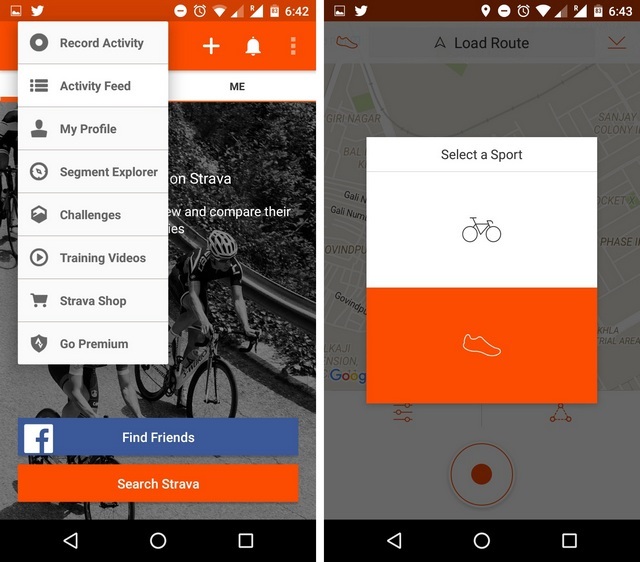 Other features of the app include route discovery, social training, challenges etc. along with support for services like Google Fit, MyFitnessPal and Garmin. There’s a free version of the app along with a Premium version aimed at athletes with features like training videos, progress goals, personal heatmaps and more. 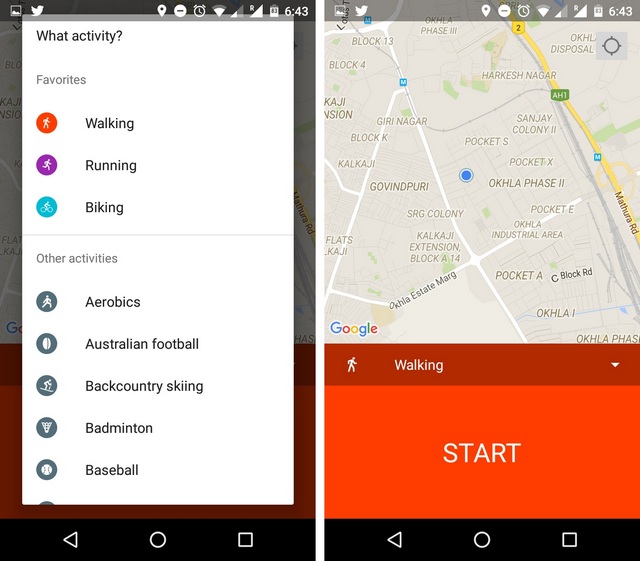 Google Fit might not be a great My Tracks alternative when it comes to GPS logging features but its fitness features might appeal to people coming off of My Tracks. The app does record your tracks and measures your distance, speed, elevation, calories along with real time stats for your run, walks and rides. Other features of the app include goals, various activities, strength training, ability to import data from most fitness apps like My Tracks itself, Strava, Runtastic, Withings etc. Being a Google app, it has a lovely UI and supports most fitness devices including Android Wear, Mi bands and more. Google Fit also lets you check your fitness data from anywhere, be it your Android smartphone, tablet, watch or the web. 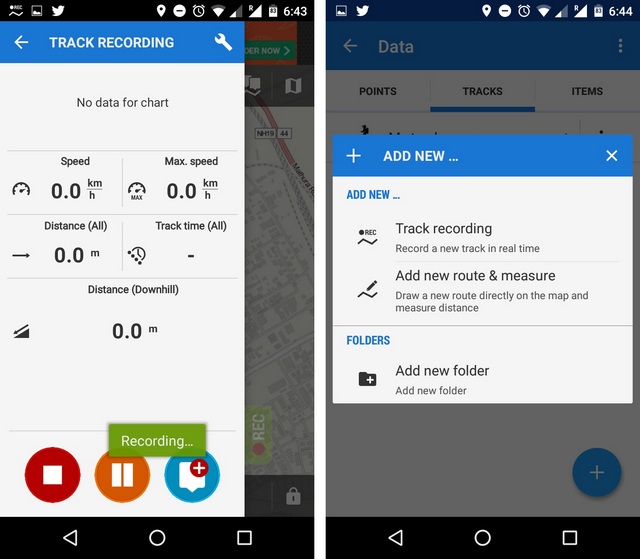 Locus Map is a fully featured mapping app that does bring some of My Tracks functionality. The app lets you record tracks (KMZ, KML, GPX etc.) for walk, run or cycling with the ability to add markers in the form of audios, videos or photos. It shows you stats like speed, max. speed, time, distance, downhill distance and chart data. You can also add new routes or even draw a route directly on the map and measure the distance. The tracking features are available in the free version of Locus but if you want mapping features like offline maps, navigation, geocaching, POI etc, you will have to get the Pro version. So, if you are looking for a My Tracks alternative with other advanced mapping features, you should definitely try out Locus Map.

Record your tracks with these My Tracks alternatives

These alternatives are the best, considering all the features you must have loved on My Tracks. My Tracks was a great app but these GPS logging & fitness apps make sure that you can replace it easily. Moreover, importing the GPS logs from My Tracks to these apps is fairly easy. So, check out these apps and let us know which app perfectly fits the bill as the best My Tracks alternative. Sound off in the comments section below.