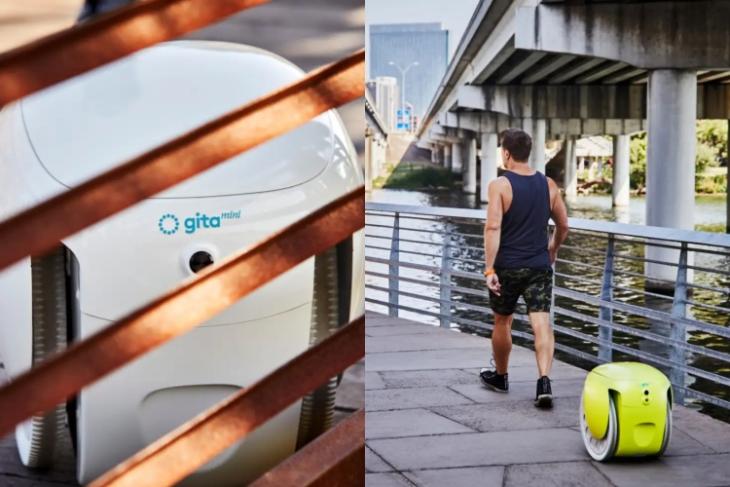 We have seen companies come up with innovative smart backpacks and luggage carriers in the market over the past couple of years. Along the same line, back in 2019, a company named Piaggio Fast Forward developed an automated luggage carrier for pedestrians dubbed Gita. Now, the company is aiming to launch a more modern version of the cargo hauler in a compact backpack form.

The Boston-based company is calling the newer variant Gitamini (pronounced Jee-Tah mini) and is aiming to launch the product in the market soon. It is essentially a compact luggage carrier that can intelligently follow its owner while dodging other people and obstacles in its way.

Now, the original Gita could carry up to 18 kgs of luggage and run at up to 9kmph speed to keep up with its owner. However, its inferior sensors and big size became inconvenient in crowded areas. So, Piaggio Fast Forward designed the Gitamini to overcome the issues of its predecessor.

The Gitamini is pretty compact compared to the Gita. It is about half the size of the previous version and weighs 12 kgs. However, as it is an automated carrier, you won’t need to carry it around. Plus, it comes with an extendable handle to pull around like regular baggage or hoist it up the stairs or sidewalks.

The Gitamini comes with a battery that can power the automated carrier to run for up to 6 hours or go up to 33kms. It has advanced optics and machine vision technology to intelligently find, recognize, and follow its “leader” through crowded spaces. Moreover, it does not require any GPS, wireless, or any kind of network connection to do so.

The wheels of the robotic luggage are independently powered, enabling it to make zero-radius turns. There is also a third motor that helps maintain the overall balance of the Gitamini during acceleration and deceleration. Furthermore, it will keep a safe distance and speed to avoid bumping onto its owner or other pedestrians. Users can use the companion app to control the various features.

The company has also integrated a “pedestrian etiquette software” into the robot. This essentially trains the Gitamini to keep a track of its owners and intelligently dodge other pedestrians and obstacles while on the move.

Now, coming to the price and availability of the Gitamini, the robotic luggage hauler is priced at a generous $1,850 (~Rs 1,36,338). It will be available in two colors, namely Spark Citron and Boardwalk Beige, and will launch on October 15. Although the company will launch the newer Gitamini version in the market, it will keep selling the original Gita at a reduced price of $2,950 (~Rs 2,17,403). The mini will be available to buy from the company’s official website once it launches next month.

This Backpack Turns into an Airbag During a Crash