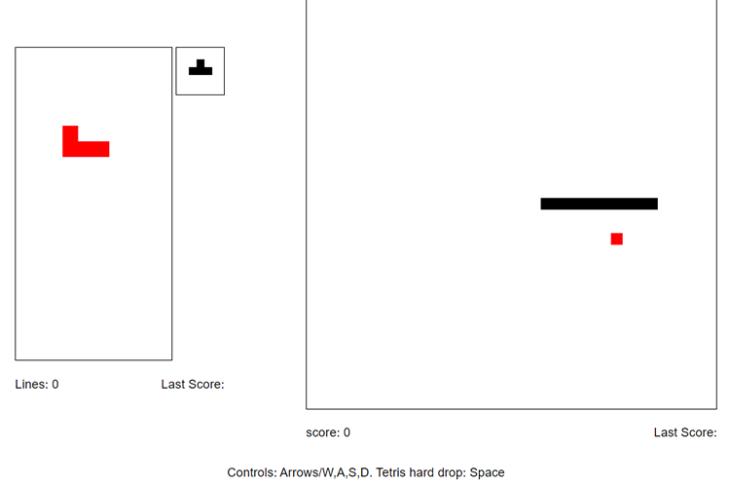 Do you consider yourself a pro gamer? Well, I’m here to introduce you to a new game that might make you think again. A developer named Grégoire Divaret-Chauveau has developed a game that puts the good-old Snake and Tetris side by side, with the same controls.

Yes, you read that right. You will be controlling both the games simultaneously with arrow keys or WASD. You lose both of the games if you lose one of them. Take a look at the quick preview of the game in the tweet below.

Tetris on the left, Snake on the right. You play both at the same time.
With the same controls.
You lose in one, you lose in both. Good luck.https://t.co/sg7ddBQ5gV pic.twitter.com/qUx3UvEmSX

The game is made as part of Codevember, a challenge for developers to improve their skills by developing a new mini project on different themes every day that lasts throughout November. In simple words, Codevember for developers is what Inktober is to artists.

I’ve been having quite some fun and frustration at the same time since I’m facing some serious difficulty to get both the games right at the same time. Don’t judge my gaming skills, the game is not as simple as you think. From my experience, using the Space bar to hard-drop blocks on Tetris could give you some room to focus on the Snake game.

Once you sync up with the fast pace of the game after a few (read, a lot of) miserable embarrassing fails, you will be able to catch up and make some impressive scores that could make your friends go “Wow”. I would suggest all the gamers in our community to pause the video game you’re currently playing (except online games of course) and test out your skills in this simple yet complicated game. As the saying goes, higher graphics quality doesn’t necessarily make up for a good game.

Check out the game here and let us know your high scores in the comments.