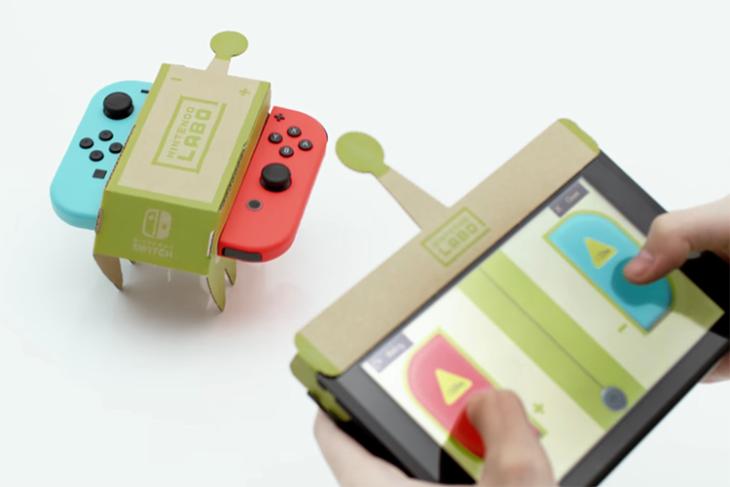 Today, Nintendo did something really out-of-the-box using boxes. It has released a wide catalog of interactive cardboard toys which kids can build and bring to life using the detachable Joy-Con controllers of the Nintendo Switch. You can shape these cutouts with the help of tutorial shared by Nintendo and turn bland sheets of cardboard into interactive toys like a piano, a fishing rod, or even a robot.

Dubbed Nintendo Labo, the initiative is meant to introduce “new ways of playing” to kids (and playful adults) and help them use Switch for more interactive and immersive play time. Nintendo’s three-step philosophy which guides the creation of these interactive toys or “Toy-Con” is “Make, Play, and Discover”. Toy-Con are designed to teach kids how technology works and will, as per the company, inspire them to devise new ways of playing.

All the Toy-Con modules can be remotely controlled using the central tablet from Nintendo Switch console. Meanwhile, IR and motion sensors within Switch’s Joy-Con controllers control the motion-related activities such as the inclination of a motorcycle handlebar, detecting the keys pressed on the 13-key piano, or opening of the house’s roof.

Nintendo Labo will be available starting April 20 in two bundles – the “Variety Kit” and the “Robot Kit” – that cost $70 and $80, respectively. The Variety Kit, true to its name, has a variety of cardboard sets which can be modeled into a remote-controlled car, a fishing rod, a piano, a motorbike, and even a living house. The Robot kit, on the other hand, consists of a wearable suit, which you can carry as a backpack, use the Joy-Con controllers as motion controllers and role-play as a robot while gaming on your TV.

With Nintendo Toy-Con, the process of building transcends into the playing experience, and from what it appears to be the demo video, it is definitely shooting out large doses of dopamine in not just kids, but also adults. Nintendo Switch was among the most popular Christmas presents in 2017 and it looks like the gifting trend is set to continue in 2018.