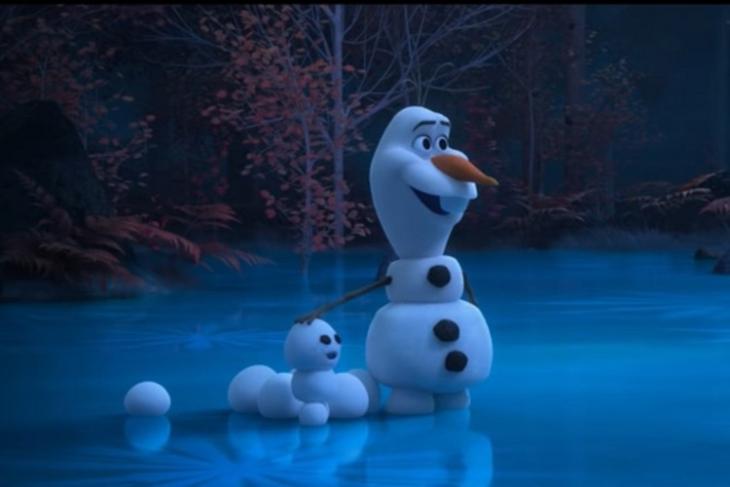 Amidst the ongoing Novel Coronavirus pandemic, the world is sitting at home and trying to pass the time. However, Disney animator, Hyrum Osmond and voice-actor Josh Gad, popular for voicing Olaf in the “Frozen” films teamed up virtually to do something productive and fun. “At Home with Olaf” is a new series of short videos that Disney is releasing on YouTube to keep the fans entertained during the quarantine.

Disney is calling “At Home With Olaf” a new Disney Animation digital series. The first short video, Fun With Snow, has been released by Disney on April 6 on their YouTube channel. The animation studio recently shared a tweet in which they announced the digital series.

In the first video (below) of the series, there are no dialogues involved. Just some fun noises are made by Olaf while he throws snowballs in the Arendelle forest. When a Snowgie comes walking behind Olaf, he takes its head and throws that too! The headless-Snowgie then runs towards the forest to grab its head. Then it comes back to an anxious Olaf, who is embarrassed by his deed. However, after the Snowgie smiles back at Olaf, it becomes a fun game for both of them.

It is nothing close to an exciting video, but it is CUTE and heartwarming to watch. And the fact that the 41-second high-quality video was animated by one animator sitting at home is just mind-boggling. The video and the animation are no less than theatre-quality stuff and Osmond did an incredible job. Also, Josh Gad, who voiced everyone’s favourite snowman from home proves that staying home is not a curse for people who are productive.

Now, as “At Home With Olaf” will be a digital series, we expect to see Disney drop new episodes every week from now on. We do not know when the series will end, but we hope it is not too soon.