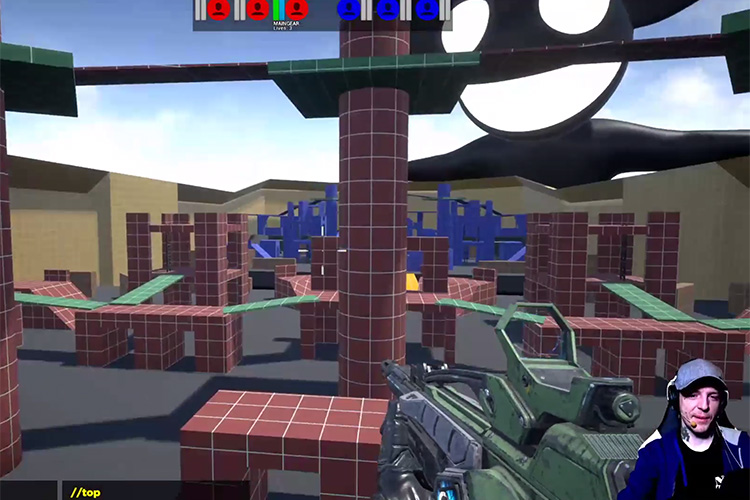 The game was teased by the electronic music artist on Twitch, where he streamed gameplay from what he describes as ‘alpha alpha testing’ stage. The early alpha status of the project is quite evident in the stream, as you can see just a bare-bones infrastructure of the map, with no real texturing anywhere other than the gun Zimmerman is using in the video.

mad early "alpha alpha" testing… but making great progress with the team. For now, consider it a pet project… give us a year at least. https://t.co/z63JrAC6UQ

From the looks of it, the map seems to be similar to what Counter-Strike players would call a gun-game map, or maybe an aim map. It’s straightforward enough (at least in its barebones state) but maybe Deadmau5 and his team turns it into something incredible from here… we’ll just have to wait and see.

For easter eggs, I suppose, there is a giant Deadmau5 figure towering over the map, almost as if looking down on the players and judging their performance on the battlefield.

Zimmerman has asked fans to stay patient and has told them to consider the game a ‘pet-project’ for now. Although he has claimed that it’s not a solo project, and fans should give it a year, at the very least, before anything concrete can be shared with the people.

Zimmerman took to Reddit to explain the current state of the project in a little more detail, informing people that the game is being built on the Unreal Engine, with help from a team of experienced Unreal developers. According to his statement from Reddit, “We’re just setting up some basic mechanics, getting a space together where we can jam out in an arena of sorts and spitball ideas… once we’ve agreed on that and nailed in network code and sever delegation, we head down the ‘fun and original secondary objective’ route.”