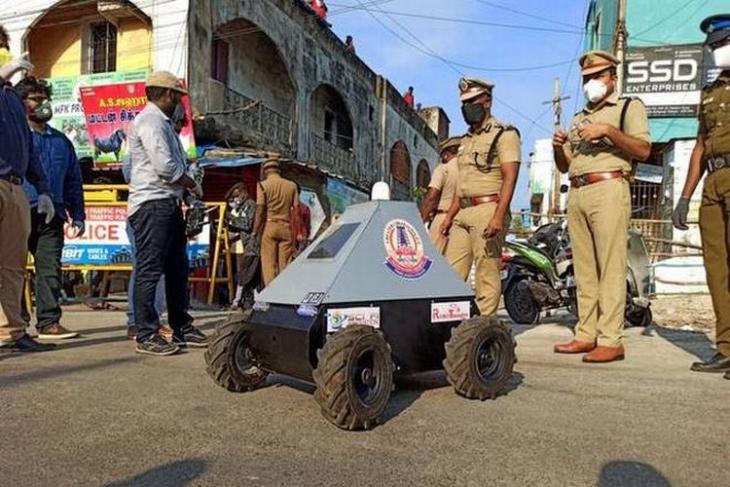 More than a year after Kerala Police inducted India’s first humanoid ‘Robocop’ (KP-Bot) into its fleet, Chennai Police has deployed a multi-functional robot called Robot Cop LD v5.0 to keep an eye on residents in COVID-19 containment areas in the city. However, unlike the Kerala Police model, the Chennai Police robot is not a humanoid and basically looks like an oversized box on wheels.

According to The Hindu, the device has a two-way intercom for direct public announcements and to listen to any communication from the public. It can be controlled using a remote control and has a mounted camera for surveillance. The machine has a wireless connectivity range for about a kilometer, and comes with a built-in LED screen to display messages, alerts and warnings.

The robot has been deployed in Meenambal Puram Street, a coronavirus hotspot in the Mylapore neighborhood with more than 11 documented cases. It is being used to monitor residents in containment zones, said R. Sudhakar, the Joint Commissioner of Chennai Police (East). According to him: “In containment zones, we can’t enter and (monitor) interior areas. Our personnel (have) to stand outside barricaded areas. Drones (are) used to make announcements (for people in these neighborhoods)”.

The robot is said to have been purpose-built for the lockdown in four days by the Chennai Police in association with with a number of technology companies, including Robothoughts, SCI Fi Innovation and Callidai Motorworks. The department is in the process of commissioning more such devices in other areas of the city in the coming days.