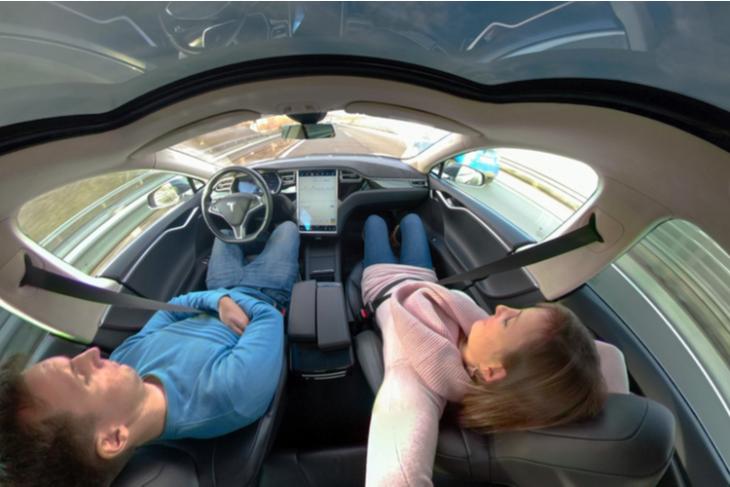 We all know that a Tesla car comes packed with an array of useful features for the safety of the driver and the passengers. However, one feature that poses a potential danger is the cars’ “Autopilot” system. We have seen instances earlier in which the system led to fatal car accidents. However, despite the risk, a man in Canada was misusing the “Autopilot” of his Tesla car, as he and his passenger were sleeping soundly in the car while it drove automatically at high speeds.

The incident occurred back in July when the Royal Canadian Mounted Police (RCMP) spotted a 2019 Tesla Model S speeding on a highway near a small town in Alberta Province. The police say that they responded to a speeding complaint from witnesses who saw the Tesla car running on the highway at 140 km/h (86MPH) with both the seats “completely reclined”.

The RCMP spotted the car on the road and chased it with the emergency siren turned on. However, when the police turned on the emergency lights on their car, for some reason the Model S sped up from 140 km/h to 150 km/h, before eventually stopping later.

The driver, a 20-year-old man from the province of British Columbia, had to bear the charge of speeding on the road. The police officer took his license and imposed a 24-hour suspension for “driving while fatigued”. Moreover, the man was later charged with the section of “dangerous driving” and will be attending a court hearing later this year.

Now, the incident took place in July which means the Tesla car did not have the capability of detecting speed-limit signs at that time. So, that might explain the over-speeding of the car on the road.

However, it is still unclear how the driver was able to disengage the safety system of the car while in “Autopilot mode”.

If you are unaware, when you put a Tesla car in “Autopilot mode”, the car, after some time of auto cruising, will encourage you (the driver) to put your hands on the driving wheel through various audio and visual cues. If you do not put your hands on the wheel after several warnings, the car will automatically park itself and disable the “Autopilot” system.

“Although manufacturers of new vehicles have built in safeguards to prevent drivers from taking advantage of the new safety systems in vehicles, those systems are just that — supplemental safety systems. They are not self-driving systems, they still come with the responsibility of driving.”, said Gary Graham, the Superintendent of Alberta RCMP Traffic Services.