You must have heard of VPN (Virtual Private Networks), right? Well, if not, a Virtual Private Network lets you use the internet more securely and lets you overcome regional restrictions. Internet Security is a major issue nowadays, considering the surge of internet in the most remote areas of the world. If you worry about the bank transaction you just made or you fear surfing the web on a public WiFi network, well VPN is for you. VPN gives you that security when you are doing a transaction or using a public WiFi network.

VPN also lets you surf websites or use services, which might be blocked in your region. Say, Facebook is blocked at your school, you can use VPN to overcome that restriction and use Facebook at school with ease. Not that we advice you on doing it. If a certain app is not available for your region or a YouTube video is not available for your country, you can use VPN to overcome these restrictions using a virtual location. VPNs are certainly a great tool for internet savvy people and there are a number of VPN apps for your Android device.

Here is our list of 10 Best VPN Apps for Android: 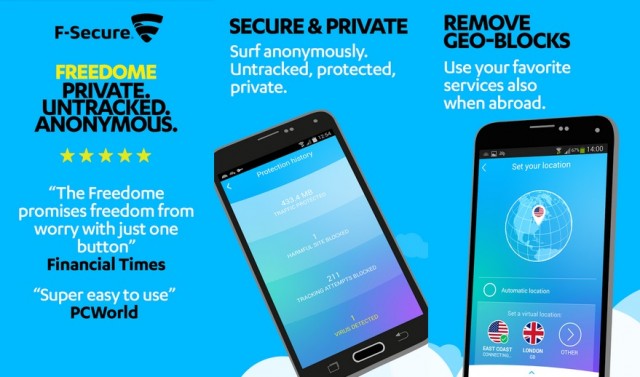 F-Secure Freedome VPN is a powerful app for anyone who wants an easy VPN experience on their Android devices. The app brings the great features we expect from a VPN client along with a great user interface, which should bode well with people not used to VPNs.

The app offers a free trial for a week after which you’ll have to pay for a monthly subscription starting at $2.99. 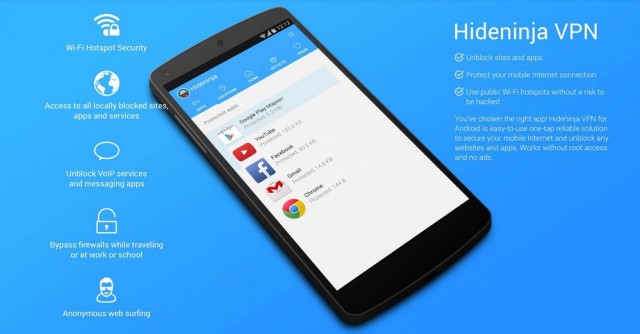 The app encrypts all the incoming and outgoing traffic for the ultimate privacy and online advertisers won’t be able to track you. The VPN client removes Geo-block and lets you access all the services or apps from around the world (lets you access YouTube, Facebook, Google, Twitter, Netflix, Spotify and VoIP apps like Skype and Viber). Other features include secure WiFi, secure hotspot, ability to bypass firewalls.

The app has a free version, which brings limited servers and ads. You can have the ads removed at $2.99 or you can go the Pro way for $19.99 per year, which brings all the features. 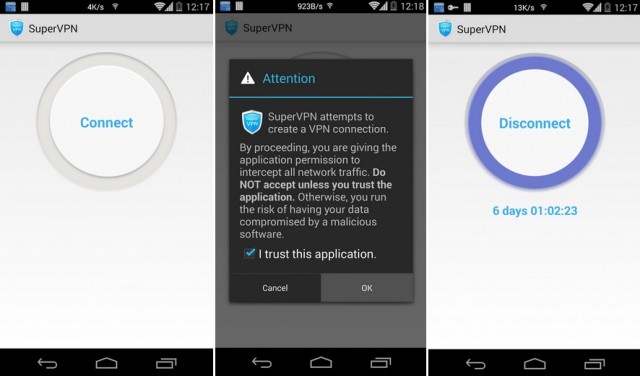 SuperVPN is arguably the most popular VPN client, thanks to it being completely free. SuperVPN brings all the VPN feature we want and all of that for free, which makes it a viable app.

SuperVPN features include third party tracking blockage, unblock blocked services and apps across the globe, internet traffic encryption and more. The app requires no registration or login and there’s unlimited bandwidth and no speed limitation. The app does not require root access, so there’s that. 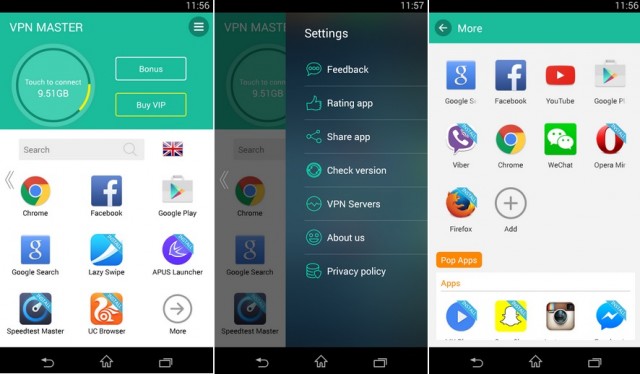 VPN Master is another popular and high rated VPN client on the Google Play Store and rightly so. If you want a consistent VPN client with no fuss, this is it. The VPN Master is based on OpenVPN, so there are the usual features we have come to expect from a VPN client.

Along with the usual VPN features like unlocking websites and services, traffic encryption, bypassing location restrictions and more, the app stands out thanks to its stable offering, high speeds and 99% up-time. Also, the app does not require you to register hence it saves you from one more username and password.

Note: This app doesn’t allow downloading from BitTorrent or any other P2P service. If you do so, it may get your account blocked.

The app has a free trial version but you will need to shed out a monthly subscription fee of $2.97 once the trial is over. 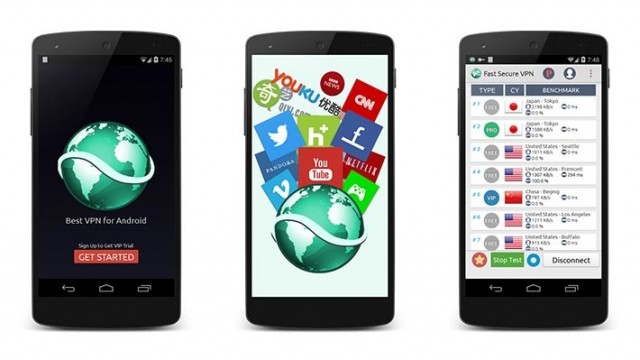 Fast Secure VPN is another VPN client, which has been available since a long time. Although, the looks and interface seem to have become outdated, the feature list still packs a punch.

The Fast Secure VPN app brings unlimited bandwidth, lots of servers to choose from (US, UK, Japan, China, Italy, Netherlands, Canada, Germany, France, Hong Kong, Sweden, Romania, Brazil, Switzerland, Iceland, Czech, and many more), online privacy and security, ability to unblock various blocked websites. While the interface is a little out of date, it’s pretty simple to use, which makes the user experience a lot better.

The Fast Secure VPN comes with a free trial but for all the premium features, you would have to go through the app’s subscription based pay structure.

Compatibility: Android 3.0 and up 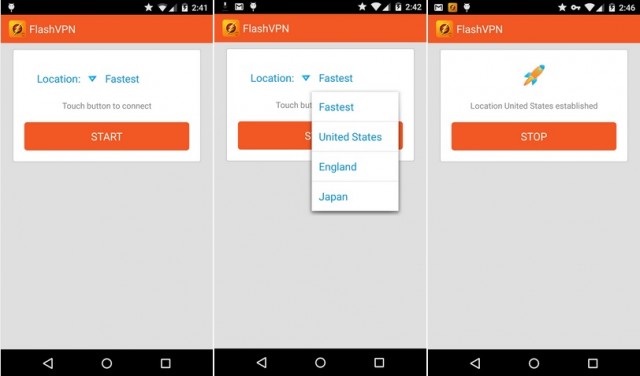 FlashVPN is a simple VPN client, if you want to get things done quickly. As the name suggests, the app works pretty fast, as there are only the basic feature you would need. The app is completely free, so the feature list compliments that.

FlashVPN brings the basic features like privacy protection, ability to unblock Geo-locked websites, no limitation on the connection time and premium bandwidth. The app offers three servers located in England, US or Japan.

The app is available for free on the Play Store, so you should definitely check it out.

If you want a visually good looking VPN app, SurfEasy VPN for Android should be your choice. The app has a lovely user interface and the developers have made sure you have a good experience while using the app.

The app comes in a paid (monthly $2.99 or yearly $29.99 subscription) as well as a free version, if you want to give it a try. Also, you can earn more bandwidth by referring free app to your friends. 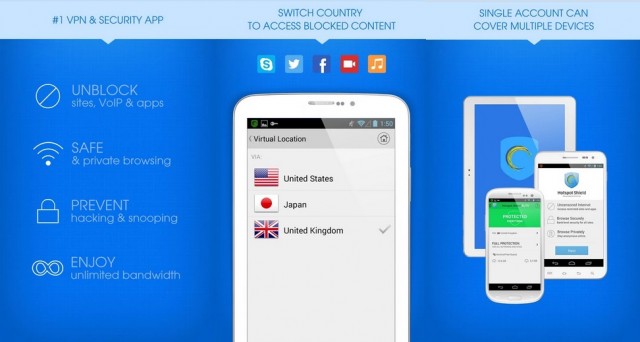 Hotspot Shield VPN app is one of the most downloaded VPN apps on the Google Play Store and rightly so, as it is pretty good. The Hotspot Shield is a very feature rich VPN app. Along with the usual VPN features, there are a number of additional features you will like.

The notable features of Hotspot Shield include Smart protection, which automatically provides optimal protection based on your network’s security. Then there’s unblocking of websites such as Pandora, BBC, YouTube, Netflix, etc; ability to secure WiFi connections, masking IP address and more. The app has dedicated servers in a number of countries including India.

The Hotspot Shield VPN app is a great feature rich VPN app and it is free but you’ll have to make some in-app purchases to unlock all the features. 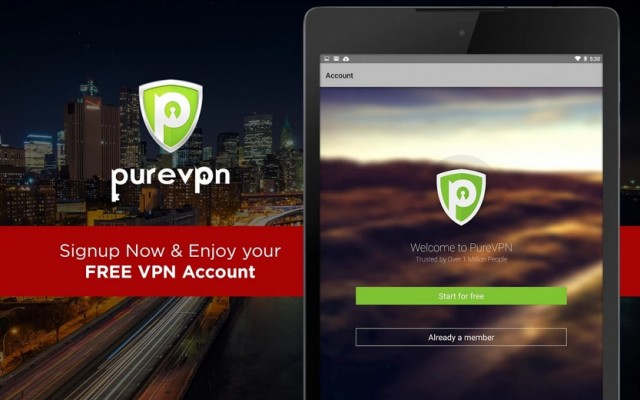 PureVPN might not be a really popular name when it comes to VPN apps although it should be. PureVPN offers all the features you would want from a VPN app.

The feature list includes a fast and secure VPN connection, encrypted and secured online browsing, defeats ISP throttling, ability to mask your IP address with one from PureVPN and anonymous browsing.

The app comes in a free version, which offers a bandwidth limit of 2 GB, which isn’t bad and you can get the paid version starting at $ 0.99 per item, if you want unlimited bandwidth and choice between UDP and TCP ports. 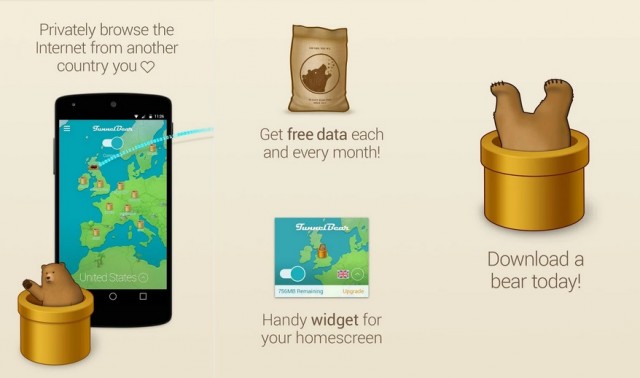 To end this list, here’s a cute little VPN app dubbed TunnelBear VPN. While the name and the app itself is pretty cute, it’s functional as well. The user interface is quite fun, which shows a bear tunneling for different functions.

The TunnelBear VPN app brings secure public WiFi, unblocking websites, privatizing your location from ad marketers and more. While the feature list might not be extensive, the TunnelBear VPN makes it up with the great ease of use.

The free version of the app offers 500 MB of data and you’ll need to get the pay if you want unlimited bandwidth. Paid plan starts at $0.99 per item.

Well, these are what we think the best VPN apps available on Android. Taking into account VPN’s inconsistent nature, experience might vary in all of these apps. What about you? Which VPN app do you use? If we have missed out on any of the best VPN app, do let us know.