VoIP (Voice over Internet Protocol) is the voice and multimedia communication over the IP, i.e. the Internet. In the past,  VoIP services were not free and you would have to pay for them just like you pay for standard landline. However, Skype became the first company to offer free VoIP calls to Skype users and started booming in this industry.

Being able to call for free to almost anyone in the world just with the help of an Internet connection is something everyone will consider. Fortunately, many companies realised the potential, and now there are tons of apps available that provide VoIP service for free or offer reasonable rates to call anyone in the world.

All these apps offer different features and calling rates to mobile and landline numbers. So, choosing the best app for this purpose can be a bit confusing. You need to understand what features you need, and if you are going to call mobile/Landline numbers, then you may also consider checking out the rates and packages.

We have created this list of best VoIP apps that offer unique features with enticing calling rates. Just make your pick according to your requirement. 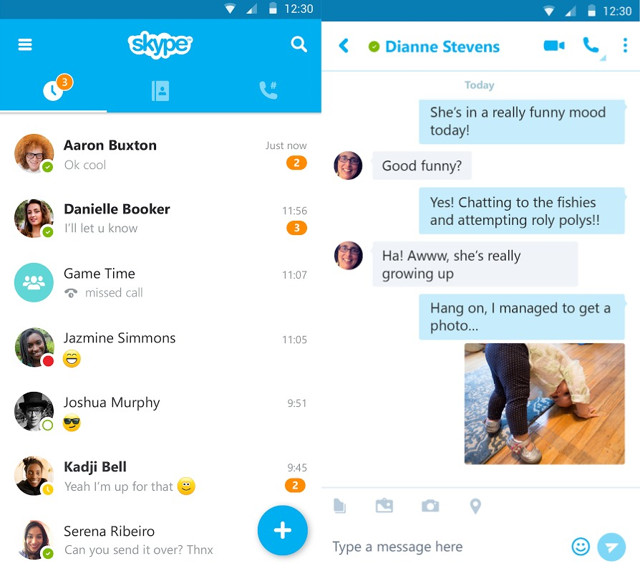 We will start with the app that gave VoIP all the shine. Microsoft owned, Skype is one of the most feature rich VoIP services, available on almost all platforms. You can call to any Skype user for free, whether it is an audio call, video call or a group call. Apart from free call features, you can also chat via instant messages, send video/audio messages, share documents and media files.

You can call mobile or landline numbers at low rates both domestic and internationally. Text messages can also be sent using the Skype credits, but you can’t receive text messages on Skype. The audio quality of Skype is quite stable and with a proper internet connection, you should be good to go.

Its large user base also makes it a good option for free calling to anyone. Some of its other features include, Group calls (up to 25 people), screen sharing, Facebook and outlook integration and Skype Wi-Fi. There are also many Skype tricks that you may like to try out to increase your productivity.

Pricing: For Skype to Skype users, call anywhere in the world for free. For calling on mobile and landlines, it costs $6.99/month in the US for unlimited calls or 2.3¢/min without subscription. US users can also get unlimited calls to anywhere in the world for $13.99/month. There are two ways to pay, you can either use Skype credit to pay on then go or subscribe for a package, get more details. 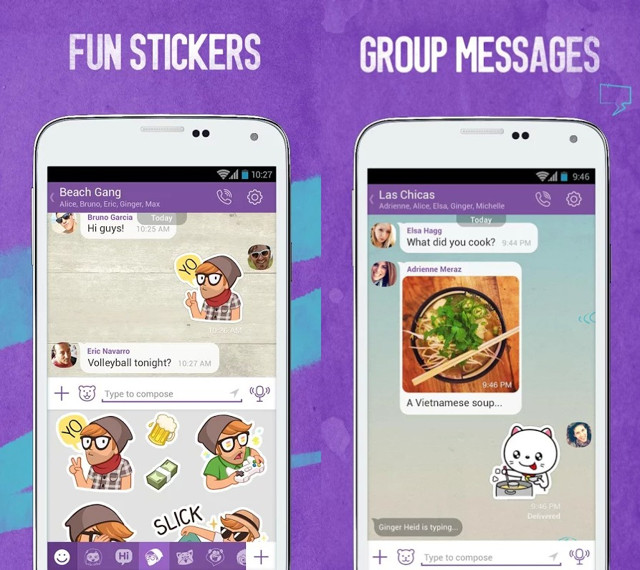 Viber is a great VoIP app if you like to use your phone for making a VoIP call (may not be best for businesses). Unlike Skype, Viber will use your phone’s number to identify and communicate with other Viber users. Viber is only limited to communicating between other Viber users for free, you will have to pay to call other mobile and landline numbers (cheaper than standard carrier charges).

Viber comes with tons of animated emoticons and stickers of all types. You are also able to use custom themes according to your desire, making it quite customizable. You can take a photo or make a video right inside the Viber app, and then share it with any of your contacts.

It also offers a PC version, but you will be required to provide your phone number to help it sync and call other people.

Pricing: Free for Viber to Viber and In the US, 1.9¢/min for calling on mobile and landline, Get more details 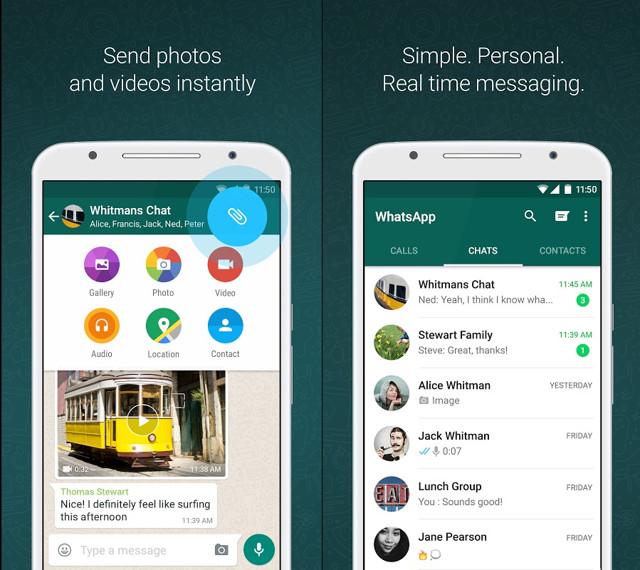 WhatsApp and Viber both are head-to-head competitors with similar features. However, WhatsApp has much bigger user pool with over 800 million users growing even more after its acquisition by Facebook. WhatsApp call quality is arguably better than Viber, but it lacks some features.

You can do everything like, messages, voice calls, use awesome emoticons/stickers and send photos and videos. Although, it lacks video calls and support for PCs, but it makes up for it with the large number of users, making it easy to find people on WhatsApp. Also, you can learning some WhatsApp tricks won’t harm.

Priceing: Free and only limited to WhatsApp users 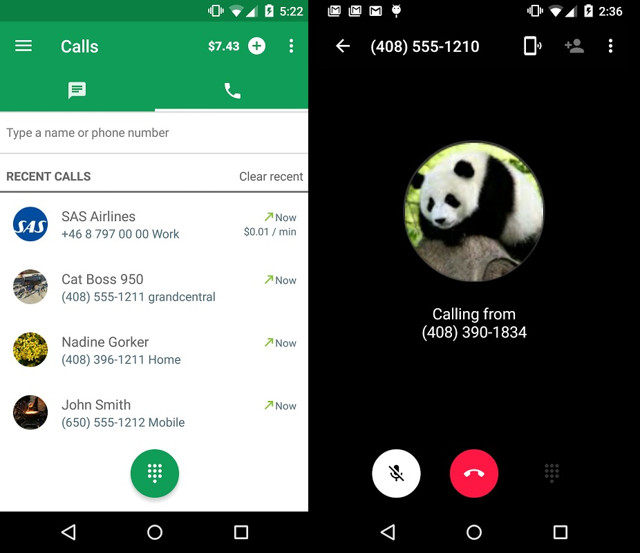 Google’s Hangouts Dialer can be integrated with your hangouts app to add calling feature to any landline or mobile number. The drill is same, you can call other hangouts users for free and you will have to pay for the call if it’s a mobile or landline number.

What makes Hangouts a great option is its wide reach as almost everyone has a Google account and offering almost all required features, like audio/video calls, messaging and interesting emoticons. However, it doesn’t have many customization options like Skype or Viber. If you want to reach the most users and get good rates, then Hangouts dialer is the app to go for (might require some setup).

Note: Hangouts dialer is not available in all the countries, so make sure you check if it is supported in your country before using. You can check if your country is listed or not by visiting Google Hangouts Help page.

Pricing: Free for the US users, and low rates for other Countries.

Get Hangouts Dialer for Android and iOS 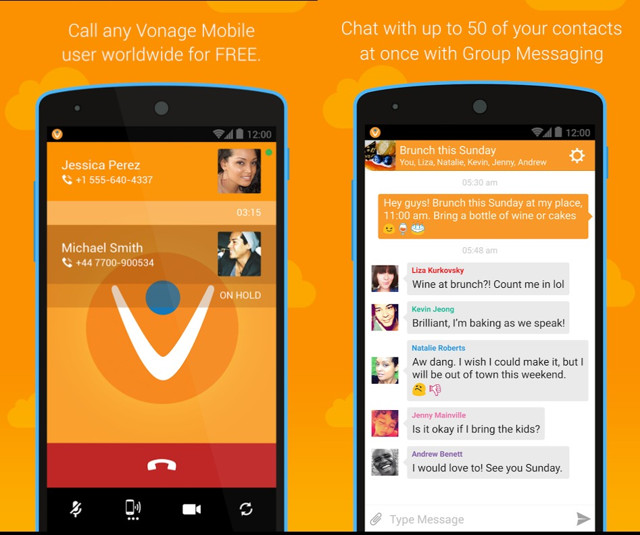 Vonage is another fully featured app similar to Skype. It offers all the free calling and messaging features like, Video/Audio calls, instant messaging, Video/Audio message, group chats and emoticons. Furthermore, you can also make very cheap International calls to up to 200 countries.

They offer HD-call quality and if you have a good internet connection, then it may seem like the other person is sitting next to you (Vonage claims). They also have a app for businesses that offer cheaper rates with features specifically designed for businesses that can also be customized.

Pricing: In the US, 1¢/min. Get more details 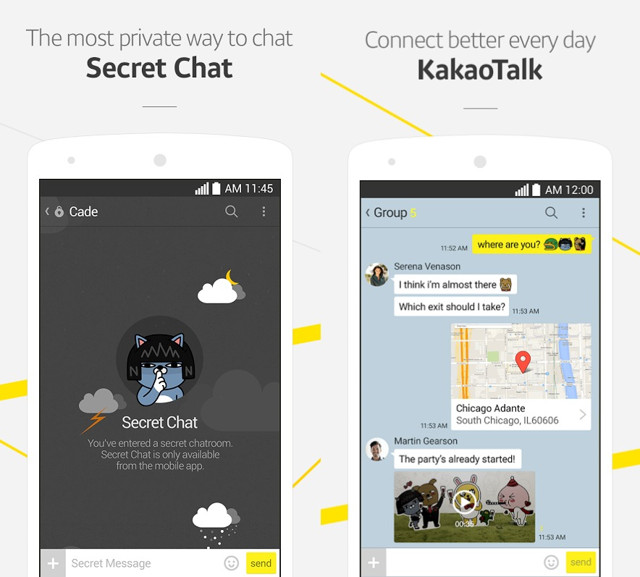 KakaoTalk is a chinese based app similar to Viber or Whatsapp. You need to register your phone number to be a KakaoTalk user and you can communicate for free with any KakaoTalk user. You can chat with other KakaoTalk users by messages or voice calls and use different items and emoticons to spice things up.

Whats makes KakaoTalk a good VoIP app is its social media features. Like other apps, you are not just bound to your phone list or numbers you know. You can chat with unknown people as well and join chat rooms. There is also a PLUS-Friends list that contains celebrities and famous people.

Pricing: Free and only limited to KakaoTalk users 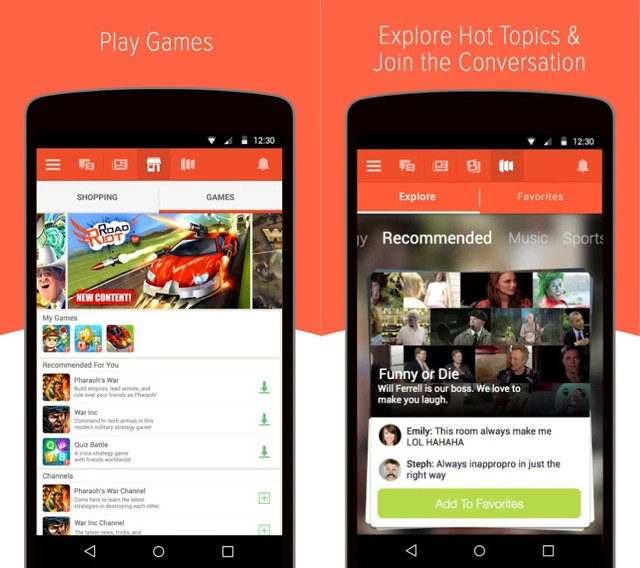 Tango is another interesting app similar to KakaoTalk. It merges VoIP features and Social media together. The setup is same as other similar apps, you need to verify your number and you are good to go. Although with Tango, you can actually create a complete profile to introduce yourself to the world.

You can do many other social media activities similar to Facebook, including photo/video sharing, Status updates and share latest news. You can also check other Tango users’ profile and send friend requests. Free communication can be done via Video/Audio calls, instant messages with tons of emoticons and group chats. If that is not enough, then you can also play games with your friends right inside the app.

Pricing: Free and only limited to Tango users. 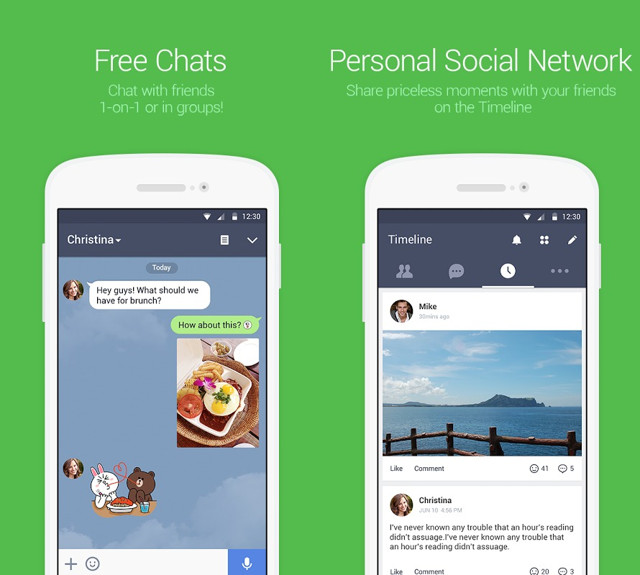 LINE offers all the VoIP features like, Video/voice calls and instant messages, but adds some interesting Social media integration. You can make posts and update all your activities on your Timeline. You can search for friends or other people and comment on what they are doing. There are also LINE official accounts of celebrities and brands which you can friend to be updated with their latest activity.

It also added a new “Keep” feature, which works similar to cloud storage for LINE. Here, you can save all your photos, videos, LINE conversations and memos. To top it all off, LINE has huge number of users with over 600 million active users, making the social media part even more interesting.

Pricing: Free for LINE users. In the US, 1¢/min for calling on landline and mobile, Get more Details. 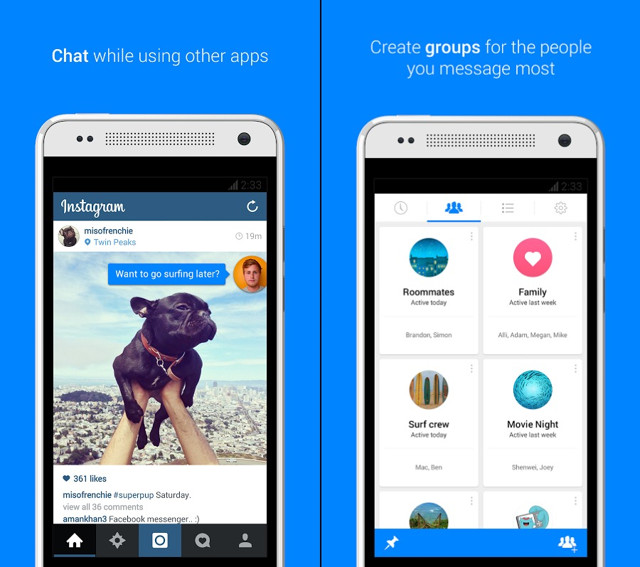 How can we not forget Facebook Messenger? It might not be one of the most feature rich VoIP service, but being able to call from your Facebook Messenger is enough to drag it to this list. Facebook Messenger comes with the ability to make Video/audio calls, and most probably, we don’t have to say anything about instant message support.

With over 1.4 billion Facebook users, finding a person to chat on Facebook Messenger should not be a difficult task. Apart from calls, you can also send voice messages, share photos, integrate with your Facebook account to keep you updated and use attractive emojis and stickers.

Pricing: Free and only limited to Facebook Messenger users

If you are an iPhone or Mac user, then you might not have to try another VoIP app at all. Apple has its own FaceTime app built into iPhone and Mac devices. It doesn’t require any special setups, all you need to do is access the contact you want to call and tap on the FaceTime button to start the call.

You can use both of your phone’s video cameras and switch between them easily. The customization options are quite robust and simple to handle. You can also specify which numbers or email address you would like to use for FaceTime. Photos/Videos can be shared with other iOS or Mac users over Wi-Fi or mobile Data plan.

Pricing: Free and only limited to iOS and Mac users

If you know any other app that deserves to be on our list of best VoIP apps, let us know in comments section.

Voca: The Simplest and Affordable VoIP Solution We Have Ever Seen