Many believe media server apps are a thing of the past. However, some users heavily rely on their personal media serve to organize and distribute media content that they have collected over the years. Of course, with the advent of Netflix and other cloud-based streaming services, the space for personal media servers have shrunk. But it’s still a viable way to stream shows and movies without traffic congestion and buffering issues. What I like about these new media server apps is that they allow us to access our media from any device and even online when we are not at our home. So here in this article, we are going to list out 7 best media server apps which you can install on your system and access media content from anywhere you want. So without further delay, let’s get started.

Best Media Server Apps You Should Use in 2019

Plex doesn’t need much introduction but if you don’t have any idea about it then here is a quick run through. It’s a powerful media application which organizes all your media content at one place and you can access it from anywhere you want. In a nutshell, it’s a perfect application for users who want to have full control over their collection of music, movies, TV shows, images, etc. It works on a server-client model where you create a server, say on a PC, where all your media content is stored and through a client, say smartphone, where you can access it. And the great part is that while streaming media content, the videos are transcoded in real-time which saves you time and resources. And for this very reason, Plex is the best media server application you can have. 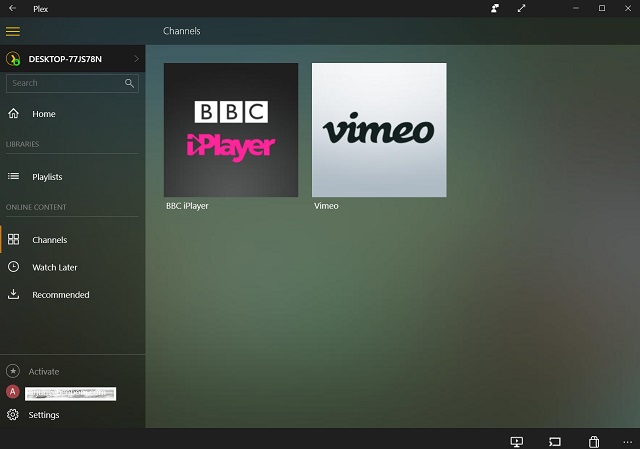 The interface is quite sleek with modern design and excellent user experience. You can add local media as well as web sources on Plex and stream it instantly without any latency or buffering issue. Since every user has their dedicated media server, there is no cross-traffic and as a result, Plex provides great performance. Even on slow internet speed, you would be able to stream your content without any issues. There is both a free and premium version which comes with its own set of features.

Under the free tier, you can access your local content remotely and can listen to radio and podcasts. You can also use the mobile app for Plex but with certain limitations. Under the premium tier, you can watch Live TV and record it as well. There is a separate library of premium music which you can access other than your local ones. All in all, Plex is a complete package for media entertainment and you should use it to understand what the fuss is all about.

Kodi is another media server application which rivals Plex, or you can say that it’s the other way round. It’s a free and open-source software intended to bring seamless experience across different media contents. Similar to Plex, it organizes all your local media content at one place with banners, synopsis, and metadata scrapped from the web. However, unlike Plex, it doesn’t support media streaming over the web. Simply put, you can’t access your media library from anywhere. You have to be in the local device or network to n access the content over SMB, UPnP or FTP protocol. 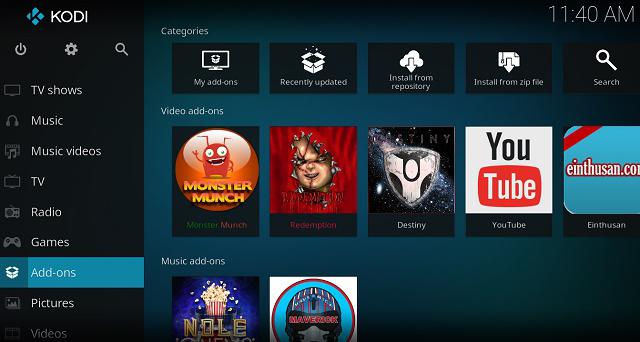 Nevertheless, Kodi is quite powerful in its own ecosystem and has great community support across users of various platforms. In fact, it’s wildly popular because of its unique add-on support. Kodi Add-ons are basically small programs similar to an app which can be installed on top of Kodi to bring further functionality. There are thousands of add-ons available on the internet which provide endless content and customization. Besides that, Kodi has native support for file sharing, subtitles, transcoding and a lot more. If you want a local entertainment hub which gathers all your media libraries in one place then there is nothing that can top Kodi. It’s simply the best and with add-on support, there are endless possibilities to explore. And don’t forget it’s completely free and available on all major platforms.

If you don’t like Plex for some reason, Emby can be a great alternative. It’s a complete media server application built on the client-server system. It offers server application for multiple platforms which you can install on any device of your choice. You can add your local media content to Emby and it will organize all your files with proper metadata and interesting details. With Emby’s client,you can stream content directly through your media server on any device. Since the device you are using may not support the format of the content, so Emby server converts the file in real-time so that you can play without any delay. Also, there is a unified portal for Emby on the web where you can access all your files by just signing into your Emby account. It’s like a complete repository of Netflix, created by you and only for you. How cool is that? 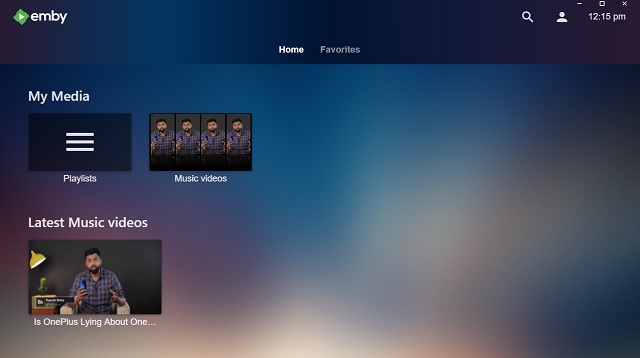 Besides, there is parental control; UPnP support so that you can easily transfer files across supported devices; Chromecast support for instant casting and of course, cloud-sync so that you can access your content anywhere you go. It also has Live TV and DVR support for recording television shows. Emby has both free and premium plans so you can choose the one which suits the best for you. In tandem, Emby is a great media server application with both front and backend client. As I said before, if you are looking for a Plex alternative, just pick Emby and be done with it.

Universal Media Player is a free media server application based on the fork of PlayStation 3. It uses the UPnP protocol to stream media content with other DLNA compatible devices. Basically, it’s a no-frills media streaming application which can play any kind of video format you throw at it. Once you install the server and provide the media library, you can stream the content on any device using a third-party client. And it performs extremely well either it’s video, music or image. There is also native support for subtitles through multiple subtitle providers. The only downside is that you don’t get cloud sync so you can’t access your library anywhere, but only locally within your network. Further, you don’t get first-party media client and have to rely on third-party applications to access and stream the content. 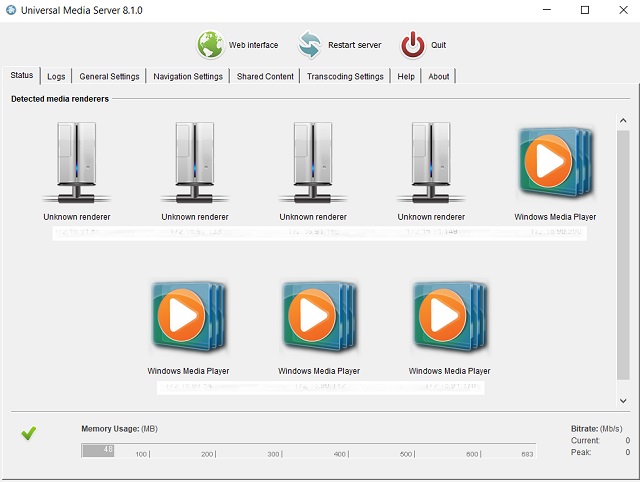 Serviio is a partly-free media server application where you can host your local media library and stream on other locally connected devices. At the outset, it looks pretty good with all the standard features. As it’s based on DLNA/UPnP, it doesn’t have a cloud relaying service so you can’t play your content anywhere you want. Anyway, it has inbuilt support for subtitles and transcoders which reduces the hassle significantly while streaming video contents of any format. Other than that, there is Trakt integration which is quite useful for tracking and syncing your progress of movies and series.

While most of the service is free, there is a paid version which lets you access your content on the web through a MediaBrowser application. Recently, Serviio added Alexa Skills to its media client so you can control your library using voice commands. That’s kind of a unique feature in this list. All in all, it’s a good alternative to Universal Media Player since the paid version allows you to stream content anywhere you want. So install the Serviio media server and check if its services make sense to you.

OSMC is a free and open-source media server which looks quite stunning with its modern design. Its features are very similar to Kodi since it’s based on parts of Linux Debian and Kodi itself. You can create a local media server with OSMC and export all your media contents, be it music, video or images. And you can access the content on other devices in your local network through FTP, SMB, or UPnP protocol. There is also an App Store which is quite similar to Kodi’s add-on. Through OSMC’s App Store, you can download and install lots of music and Live TV services. 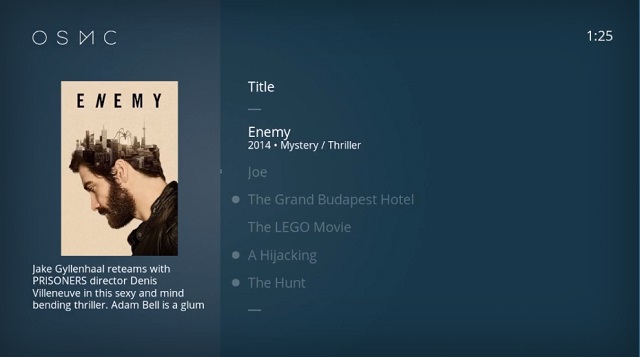 It means that besides your local library, you will have access to thousands of movies and music through its cloud library. Further, OSMC has a powerful transcoder which can play most of the video formats without any hiccup. Since the media server is free and open-source, there is no dedicated channel for support. You will have to depend on the community if you encounter any issue. All in all, it’s a great looking media server which packs all the punches. If you don’t like Kodi or its UI, you can go for OSMC. I am pretty sure it won’t disappoint you.

Media Portal is our final media server app on this list. Like most other apps, it’s free and open-source and works great for the most part. Media Portal is intended to bring a cohesive multi-media experience on your PC. You can connect your local library of movies, TV shows, music, pictures, etc and it will scrap all the metadata from the web to make it look visually pleasing and organized. Further, you can watch TV in sync with your local media files and record it too. Basically, you will have a complete media entertainment hub which can be accessed from all your local devices. Also, you can access your media content through the web, but can’t stream it.

You will have to download it first and then you can play it. The reason is that it doesn’t have a cloud relay service and can’t transcode media files in real-time. Nevertheless, there are plugins, just like add-ons on Kodi, which can bring tons of new content and added functionality to Media Portal. To conclude, it’s a potential alternative to Kodi, and if you are looking for some change, you can have a look at Media Portal. It’s quite good as a media server and an entertainment hub. You might find it interesting.

Enjoy Your Media Library with These Media Server Apps

So that ends our list of best media server apps you can install on any of your devices. While cloud-based services like Netflix and Amazon Prime Video are on the rise, there are still users who prefer their own library of content. Additionally, you get unmatched performance because of no server load. So media servers do have its own place and if combined with cloud-based libraries like Plex, it can get even better. So, go through the list and find the best media server apps suited for you. If you want to suggest a media server app that’s not on the list, let us know in the comments section below.

12 Best Plex Alternatives You Should Try