As a kid, I could count on comics to sail through plenty of free times. While I loved all sorts of comics, mangas aka Japanese comic books were one of my top picks. With an intriguing storyline coupled with vivid pictures, those comic books left a lasting impression. And despite having a boatload of thrilling movies, dance, and music learning apps, turn back to the classy Japanese comics again and again. They fill my time with plenty of bone-tickling comedies and whimsical fantasies. If you are willing to give them a chance as well, look no further than this meticulous selection of the 10 best manga apps for Android and iPhone.

Best Manga Apps for Android and iOS in 2021

So, what sort of comics do you like to take on: comedy, action, horror or love? Considering the age-old theory that the one size may not fit all, I have picked out the apps that cater to a wide range of tastes. Therefore, irrespective of what appeals to your choice, you can find comic books that can take you for a long reading spree. And that too without costing you anything/much. With that said, let’s flip over the first story of a long series!

To get started on the right note, I would like to put Viz Manga right at the top of this lineup. Boasting entire VIZ digital catalog, the app offers you access to most popular manga and comics including the hit series such as Dragon Ball Super, My Hero Academia, Naruto Next Generations and the cult classics like Vampire Knight, Tokyo Ghoul, Official RWBY Manga Anthology, and more. Furthermore, the app keeps on adding new series regularly so that you always have something really interesting to read. 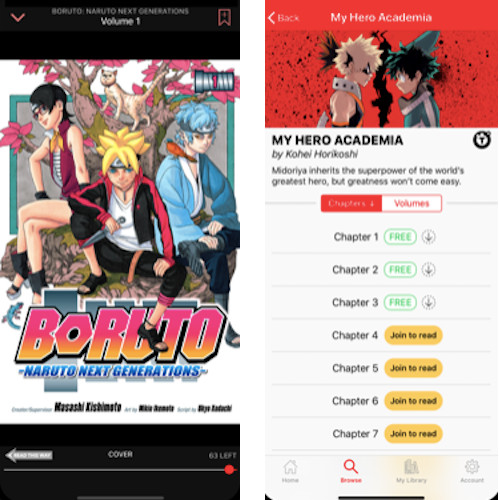 One of my favorite features of this app is the ability to build a vast library of interesting mangas. With a fully personalized library at hand, you can catch up with your favorite comics at your own pace. Not just that, it offers a downloading option as well to let you read books even offline. What’s more, the app also lets you read free previews of paid volumes so that you can make an informed buying decision.

When you have the official manga app at the disposal, getting the latest manga titles directly from Japan becomes easy-picking. As you may have already guessed, Crunchyroll Manga is an official manga app for Android and iOS that lets you quickly access the hottest manga books as soon as they are rolled out in the newsstands in Japan. So, staying in the loop with all the trending books like Fairy Tail, Space Brothers, and Attack on Titan will be smooth-sailing for you. 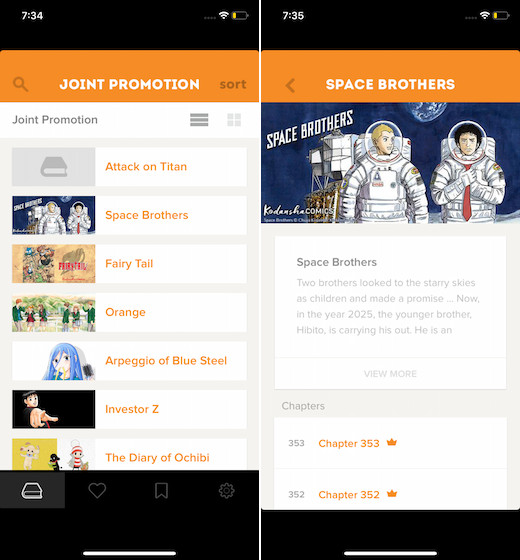 The app features a clean look and also offers some neat customization tools so that you can fine-tune all of your favorite titles in line with your reading taste. Do note that Crunchyroll Manga’s freemium model is quite basic. Therefore, you will need to get a premium membership, if you wish to get the entire series catalog or have unlimited reading access.

If I were to pick a fully-featured manga app for Android, I would happily go with ComicRack. Probably, the best part about this app is a range of reading tools that offer a much-improved reading experience. For instance, you can fine-tune the colors as per your comfort so that the extensive reading won’t harm your eyes. Plus, it features super handy management of reading states like completed, unread, and bookmarks. Thanks to the app widgets, keeping track of the stories that may hook you for hours becomes quite straightforward. 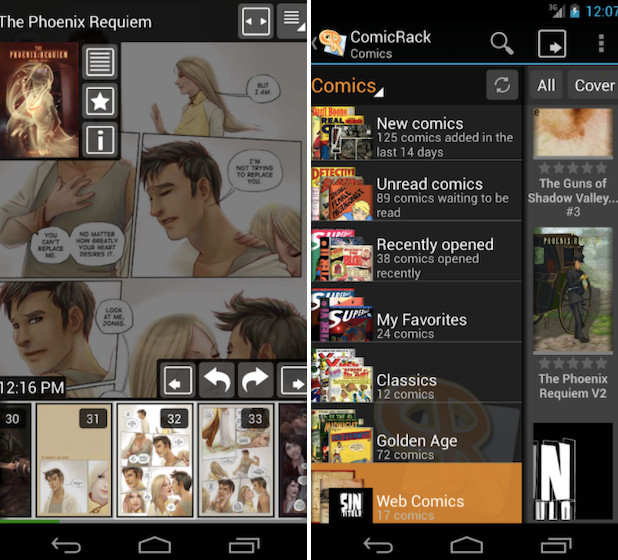 Another feature that gives ComicRack an edge over many other counterparts is the ability to support for CBZ, CBR, CB7, CBT, PDF, DJVU, and WebComics when used together with the Windows’ version of the app. And with some cool live wallpapers at hand, it can also let you customize the appearance of the app. Just in case you would like to keep your fellow Twitter followers in the loop about what you read, there is a Twitter integration as well.

As for the pricing, ComicRack is a touch expensive at $8. But, considering the notable features, the manga app is worth it. Do note that, it’s available for iPad and not iPhone, which seems a bit disappointing. 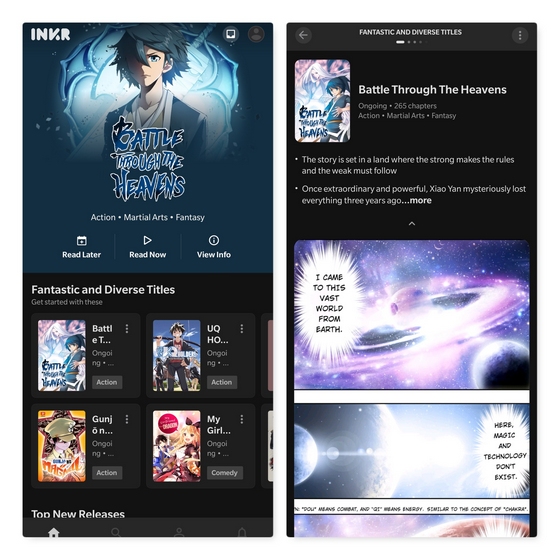 With this app, you get access to a variety of comics across action, romance, comedy, horror, drama, isekai, slice of life, sci-fi, and more. Combined with the personalized recommendations system, you will discover content that you are likely to love. Moreover, if you have multiple devices, the app auto-syncs your data and reading progress.

Should you wish to read colorful comics, I would recommend you to give a shot to MangaToon. Both in terms of having a big library and a wide range of genres including comedy, love, horror, romance, and action, this manga app looks right on the money to me. Just like most of its counterparts, it also adds the hottest web comics daily. And based on your taste, you can make a nice collection of your favorite books and even download the ones which you want to read without any interruption during offline. 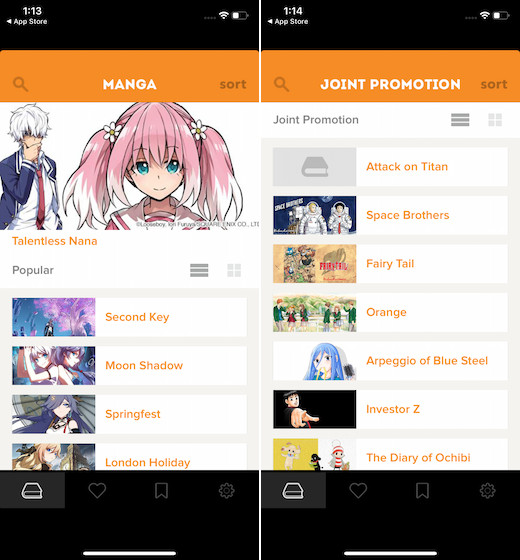 Have an interesting story to share with others? Well, you can also write your own stories that you have kept under wraps for years and share them with others. The platform can give the needed exposure to your stories so that they can bring a lot of praise to you. Furthermore, MangaToon has support for several languages including English, Indonesian, Vietnamese, Spanish, Portuguese and Thai, which is yet another plus from the flexibility perspective.

When you talk about the top manga apps for iOS and Android, it wouldn’t be wise to give a miss to a highly intuitive app like Manga Dogs. One of the biggest highlights of this app is a massive library of thousands of mangas from more than 20 sources. So, I bet it has the goods to cater to your different reading tastes. As the app also keeps a tab on your interest and offers recommendations accordingly, finding the mangas that can live up to your preference should be quite easy. 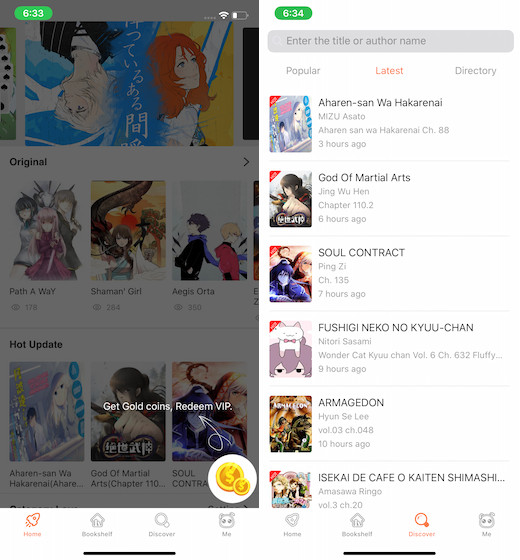 Besides, it also sends out alerts whenever your favorite books are updated so that you don’t miss out on them. On top of all, Manga Docs comes with a handy advanced setting that opens the game for plenty of customization to spice up your reading.

Claiming to be the ultimate manga app for both iOS and Android, Manga Reader has got all sorts of tricks to win you over. First and foremost, the app offers you access to thousands of mangas from more than 30 sources which makes it a one-stop-platform. With a smart filter, it lets you quickly find specific comic books. 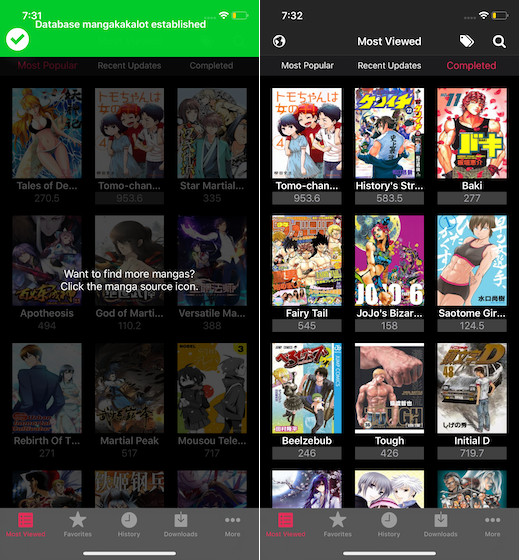 As it also keeps a close watch on the search history and what appeals to your interest, you should expect your recommendations to be spot on. What has called for my attention is the ability to download up to 5 mangas simultaneously. Save it for the times where you are in a hurry to put all of your favorites in a special kitty for uninterrupted offline reading.

While Manga Monster may not be the most feature-rich manga app out there, you can bank on it to offer a decent manga reading experience. Loaded with a vast catalog of over 24000 mangas, the app is up to the mark when it comes to having variety. Besides, the regular update means you will always have timely access to the latest editions. Featuring a clean interface and fairly simple tools, the app won’t take much time to get into your groove. Being lightweight, it also feels snappier while running. Overall, it’s decent app for your manga reading pleasure. 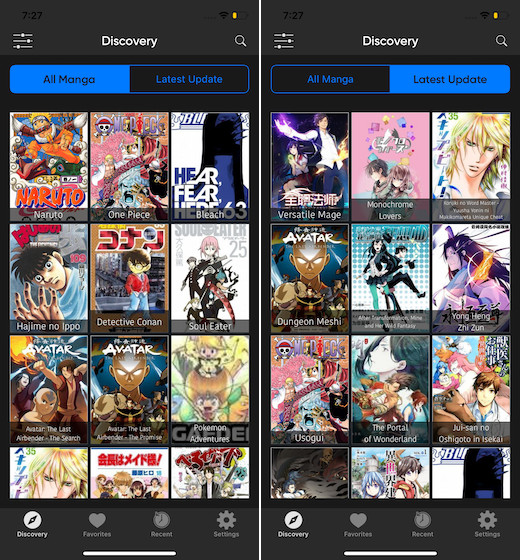 For a simplified comic book experience, Manga Box has looked quite good to me. The app has one of the biggest libraries of books from popular authors. Thus, it doesn’t matter what sort of books you love to read, chances are pretty high that the app can keep you glued to your books with a variety of genres. 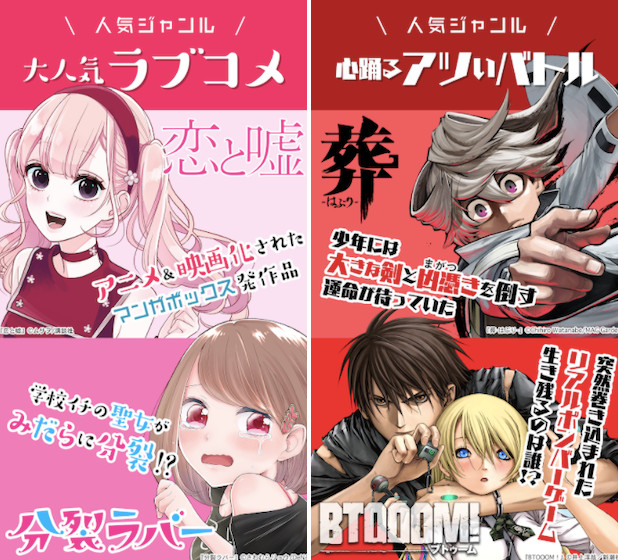 Additionally, the app also adds new content daily so that there is always a chance to bump into something that’s really intriguing to read. In terms of customization, I have found Manga Box a little light. But if you aren’t a fan of full-on customization, you won’t have any complaint. With a clutter-free interface and easy-to-use tools, it ensures there is less learning curve.

Last but not least, Online Manga Reader has checked off all the essential boxes to be a reliable manga app. The app comes with an ever-updating catalog to let you read a wide range of Japanese comics like comedy, romance, horror, and more. But what makes it a fun-loving manga reader is the ability to let users read comics with music. 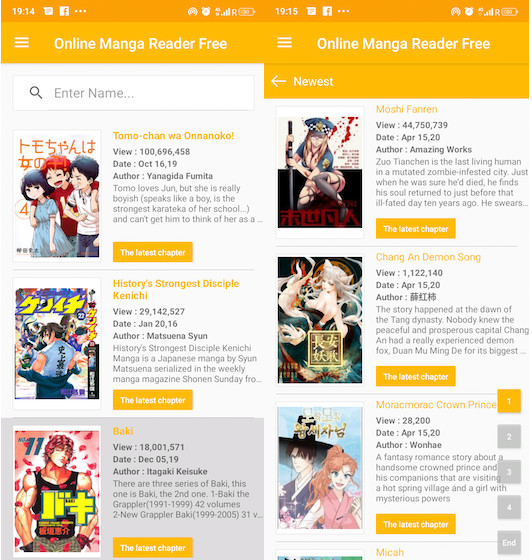 Perfect for the times where you want to keep the monotonous feeling at bay. That aside, features like bookmark, offline reading, and creating a personalized collection of all the favorite books make it a safe bet for your mangas reading journey.

Choose the Best Manga Apps for iPhone and Android

There you go! So, these are the top manga apps lined up for you. With a variety of apps at hand, I guess your eyes have caught the right manga reader. But before you start flipping over the pages or exploring the massive library of Japanese comics, be sure to let us know the app that has found a place on your device. Besides, also tell us about the worthy applications that might be missing from the roundup.