Every time Apple Inc launches a new iPad, we expect something huge! Like Steve Jobs would have envisaged, when he launched first iPad, it is more than a common Tablet PC. Now, Apple iPad is a widely popular and versatile-in-use device that competes with high-end Smart devices.

Now, with the launch of iPad Pro, Apple made iPad range all-set for professional computing, from document creation to video editing and from note-taking to web browsing. In spite of having an impressive touch screen and display, there are times you need a superb stylus to make things go smooth.

That being said, you cannot go and pick up a random stylus, since different styluses are made for different purposes. Some styluses are good for drawing while others are meant for quicker note-taking. In this post, however, we have a list of top ten iPad styluses, which are suitable for various purposes you’d come across.

Choose the best Stylus for your iPad 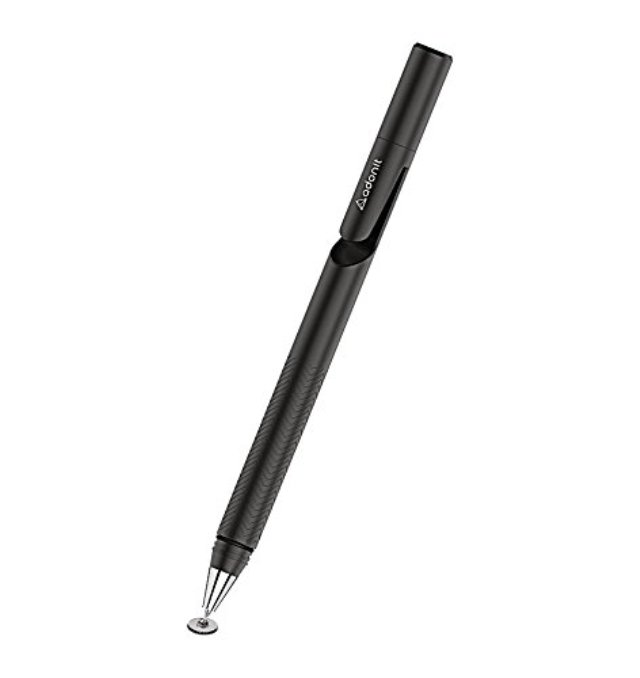 Adonit Jot Pro iPad Stylus is a multipurpose iPad stylus that is quite popular. One of the best iPad accessories you can get, the stylus emphasizes precision when you take notes or when you’re drawing something. There is no connection or such procedure; it is possible to use the stylus out of the box. As per what users say, the experience is more like a pen, and the plastic disc tip is quite useful. While the precision disc enhances precision when you touch the screen, its textured grip gives comfort as well as safety during the usage. If you use the stylus more often, you would find the mobile clip useful, which helps you carry the stylus almost everywhere. It’s just 123mm long when the cap is closed, and it weighs just 20gms. Adonit Jot Pro iPad Stylus is compatible with all versions of iPad including iPad Pro, iPad Air and iPad Mini. 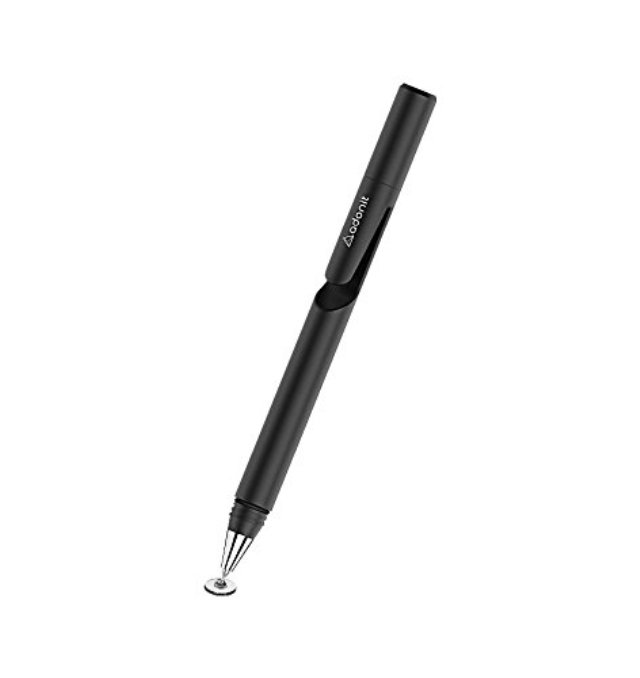 If you need a less expensive and easy to handle stylus, Adonit Jot Mini Fine iPad Stylus is a nice choice and the brand value is quite useful when it comes to after-sale support and quality. When compared to the aforementioned one, its length is shorter — just 98.7mm when closed with the cap. Also, its weight has also been brought down to just 13gm that is pretty convenient. Despite being affordable, you do not have to compromise precision, since Adonit Jot Mini Fine iPad Stylus comes with the Precision Disc. Also, because of being compatible with almost all Smartphones and tablet PC out there — along with all versions of Apple iPad (iPad pro, iPad Mini and iPad Air) —, you will have a smooth workflow everywhere. You will miss the textured grip but the overall performance and pocket-friendly size is just-right for the on-the-go users. 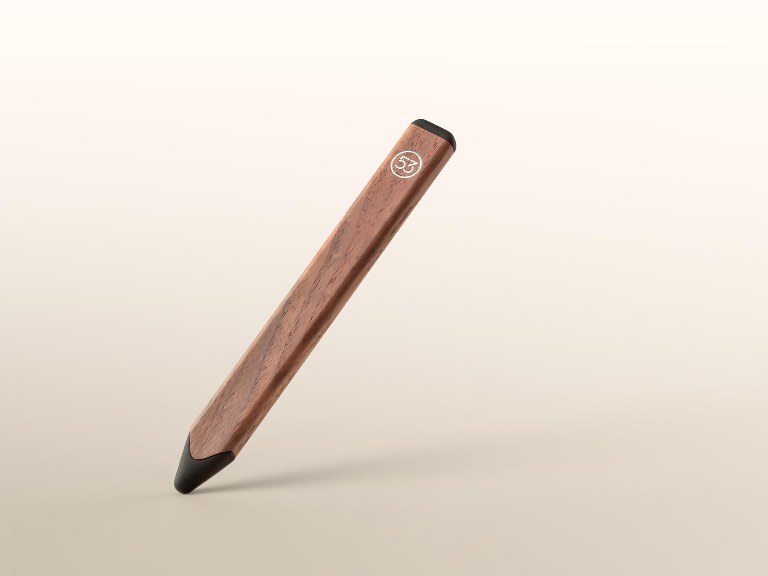 FiftyThree Digital Pencil for iPad is a highly-recommended iPad stylus, not only by users but also by experts. This one is suited for both the casual note-taking and basic sketching adventures you go for. FiftyThree Digital Pencil for iPad is meant to work fine with all the versions of Apple iPad (including iPad Pro) along with iPhone. Although the stylus looks like a common wooden stylus, it’s packed with some stunning features. For instance, there’s Surface Pressure — a technology that’s useful for multi-shade sketching and would work fine with iOS 8. Other features include the built-in eraser and blend option lets you make things seem better. It also comes with Palm Rejection technology, giving a calm environment to let you draw or write. There is also a magnetic snap that lets you carry the stylus along with your iPad. It’s available in three different variants. 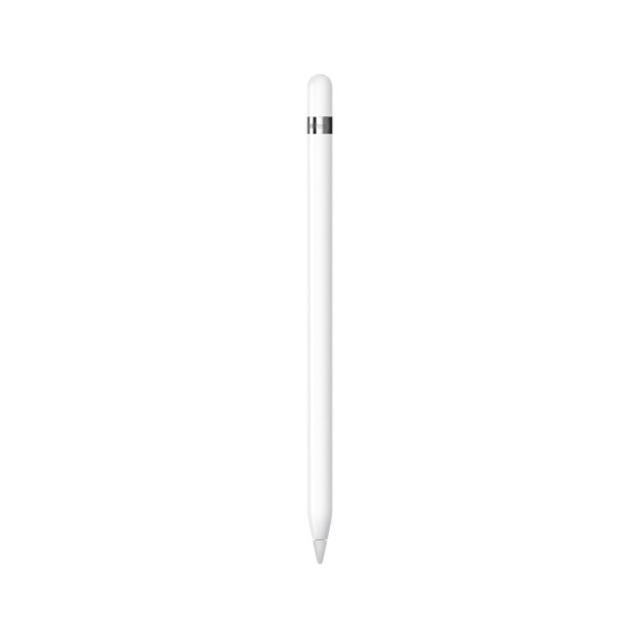 Here we have the official stylus for Apple iPad Pro. This is different from other styluses mentioned here because the compatibility is limited to the recently-launched iPad Pro. When you’re using the iPad Pro for designing or sketching, you can have pixel-level access through Apple Pencil, and iPad Pro senses the use of Apple Pencil to give you an enhanced performance. In other words, you are going to have highly responsive sketching or writing. Also, you can control thickness of line by changing the pressure you are applying; similarly, tilting your hand can bring various shades into the screen. When we add the battery backup of 12 hours and complete integration with iOS, it’s Christmas. From tip to cap, it’s 175.7mm and weighs 20.7gms. 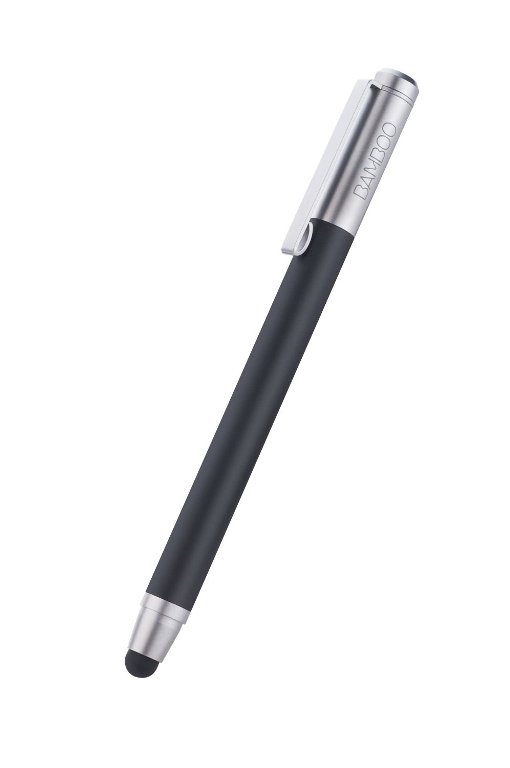 This product from one of the well-trusted developers of digital pen technology is for you when you need affordability as well as quality. It claims to offer the smoothest pen-like touch experience, which would be best for writing as well as doodling, for that matter. It makes use of a carbon fiber nib that enhances precision and brings you smudge-free navigation instantly. At the same time, its aluminium cap would be effective enough to protect the carbon nib from a variety of obstacles. With the cap on top, Wacom Bamboo iPad Stylus Pen is 125mm long and the weight is just 12g. Also, if you use additional services from Wacom — such as Bamboo Paper and Wacom Cloud — you can make things easier in your Apple iPad. It’s all good for annotation, doodling and collaboration, along with common navigation. 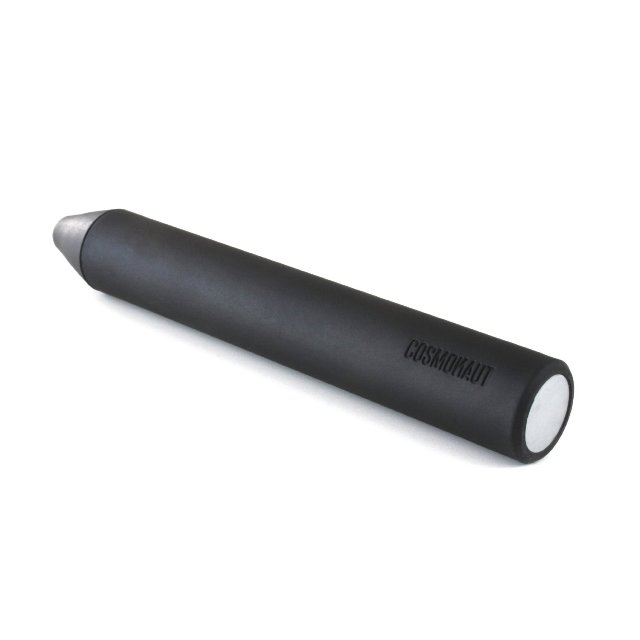 This iPad stylus seems to be the best choice for students, when they want to draw as per what they need; no sorts of setting or technologies involved. It’s a simple stylus and is being used a huge number of schools. Cosmonaut Wide-Grip iPad Stylus works fine with all the apps you use and is suitable for a variety of purposes like doodling, sketching and writing. If for nothing else, you can use this stylus for the impressive build and durable design, which are way too important for some users. In other words, you’re going to get the best-available quality for what you pay, though it’s not having a bunch of features or hi-fi technologies. For those who need a simple stylus for iPad, Cosmonaut Wide-Grip iPad Stylus is yours. 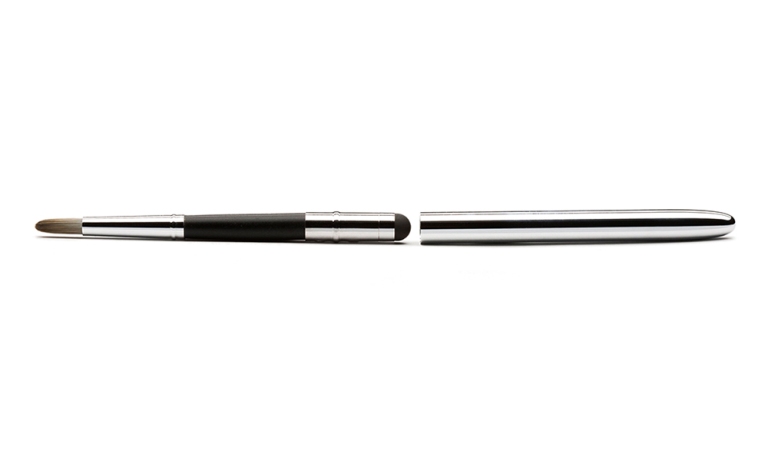 Hello, Artists! If you need a rubber-tipped iPad stylus that you can use for convenient sketching and drawing, you will love to have a look at Sensu Artist Brush & Stylus, which is reasonably priced as well. As the name says, it’s a combo of a brush and a stylus, both of which are useful from the artist point of view. Using this combo device, however, you will be able to accomplish a variety of tasks — Drawing, Painting and Navigation, for that matter. While the brush is meant to serve artistic purposes only, the stylus can be as good for almost every task on your Apple iPad. The best part is that you can toggle between the brush and stylus quite easily — there are also some included accessories that help you draw well. For artists, it’s a must-grab iPad accessory, we’d say. 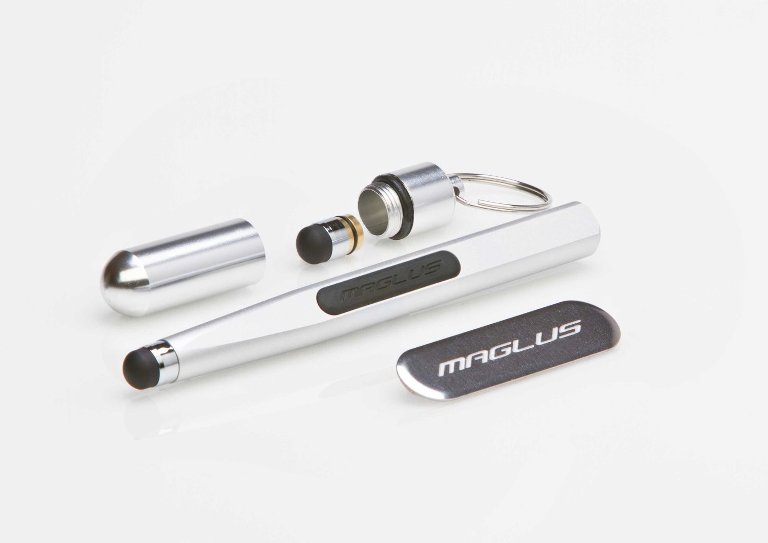 When you want to have a complete pen-like experience in your Apple iPad, you should try getting Maglus Stylus that is preferred by some users as well. It’s a bit expensive but you get satisfactory features for the money you got to pay. Some notable features of Maglus Stylus include the precision silicone tip, its aluminium-made body that’s ergonomic and the included magnets for getting attached to the iPad easily. The best part is that, along with Apple iPad and the various versions it has, Maglus Stylus would work quite fine, on any capacitive touch screen. You’ve choice when we come to the case of Maglus — you can choose between the microfiber tips or silicone tips, for instance. Similarly, the edgy corners MAY be convenient at least for a few of you. 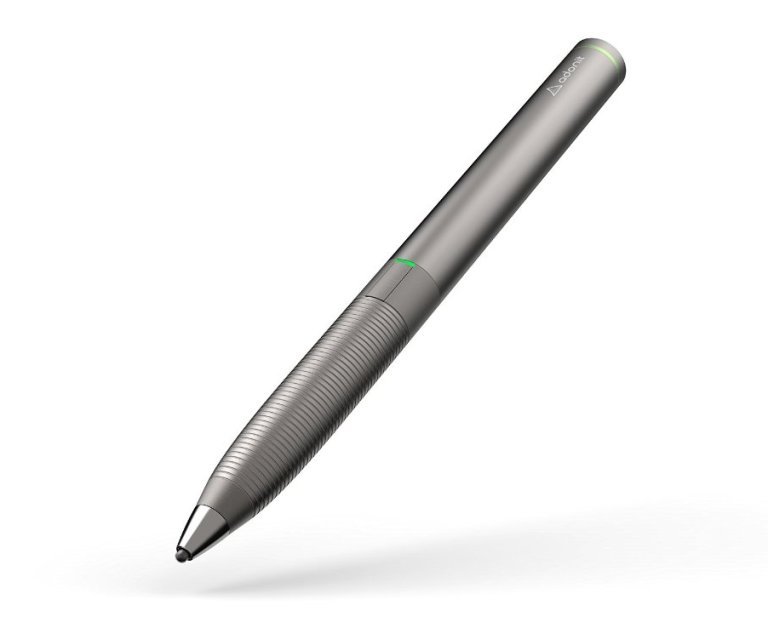 As the name says, it’s an Evernote Edition iPad stylus you can get from one of the most trusted brand — Adonit. The stylus makes use of Pixelpoint technology, which is meant to provide ballpoint precision when you write / sketch on your iPad screen. Also, the 1.9mm tip is way too impressive, for that matter. Talking of its build, Adonit Jot Script Evernote Edition is equipped with a slim yet grippy build, and with the compatible app installed, it’s Christmas. You’ll be able to charge your Adonit Jot Script Evernote Edition using the provided USB charger and between two charges, you are going to have a working time of 20 hours. With the compatible app, you’re going to enjoy the benefits of palm rejection as well. Talking of Evernote, you’re going to get Evernote Premium subscription of 6 months when you purchase this iPad stylus. 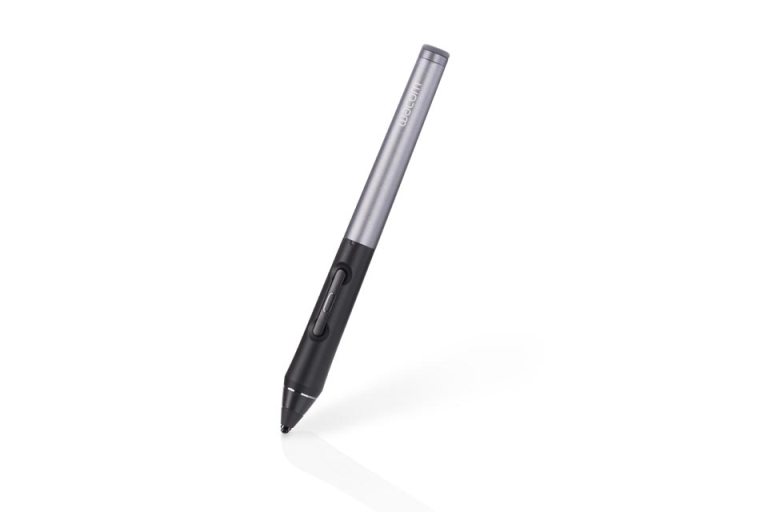 We end this list of top iPad styluses with an awesome product from Wacom — which is targeting passionate artists! It has to be noted that the main objective of this stylus is the perfect precision and the best response when you are trying to sketch something on your iPad screen. Considering this, the company has included a thinner and firmer tip. Similarly, there are 2048 pressure levels available and you can choose the most appropriate brush level and shading when you are sketching. Talking of compatibility, Wacom Intuos Creative Bluetooth iPad Stylus works fine with iPad Mini 1, iPad Mini 2, iPad Mini 3, iPad 3, iPad 4 and iPad Air 1. In all these devices, you get palm rejection if when you are using the compatible creative apps. In the official site, you can get information about supported apps. If we are to take all these to account, Wacom Intuos Creative Bluetooth iPad Stylus is the best for artists. It will be connected using Bluetooth, by the way.

So, who are you — an artist, a common note-taker or a serious writer? And, which stylus are you using for your iPad? Do let us know what you think about your iPad stylus, through your comments.