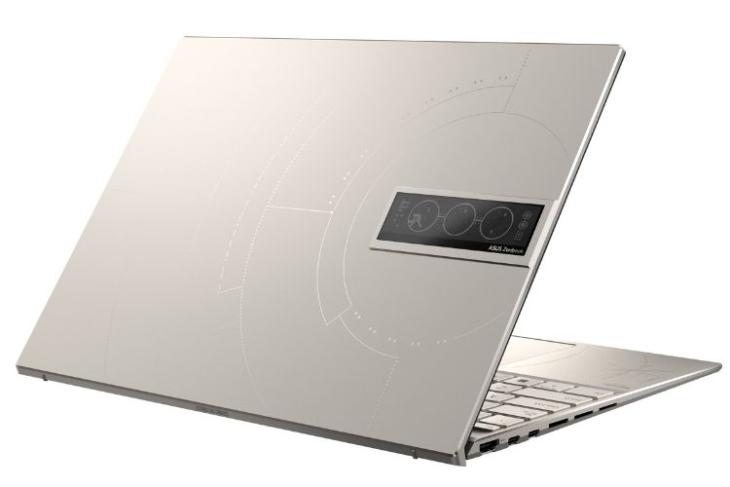 To celebrate the 25th anniversary of Asus’ first laptop that was sent to the space, the company has launched the special ZenBook 14X OLED Space Edition in India. It comes with an exclusive ZenVision display that is inspired by a datasheet of a spaceship. Asus has also launched the ZenBook 14 OLED, VivoBook S 14/15 OLED, and VivoBook 14/15 alongside the Space Edition laptop.

The 3.5-inch OLED ZenVision display on the lid can be used to add short texts and animations. Apart from this space-inspired element, the laptop has a morse code around the design, which reads “ad Astra per Aspera“, and a keyboard deck that resembles a space capsule cockpit with multiple easter eggs.

It comes with support for up to 32GB LPDDR5 RAM and 1TB PCIe 4.0 SSD storage. Onboard, there’s a 63Whr battery with 100W fast charging support. As for the port placement and connectivity, the ZenBook 14X OLED brings two Thunderbolt 4.0 ports, one USB Type-A port, one USB Type-C port, an HDMI 2.0b, a 3.5mm combo jack, a microSD card slot, and Wi-Fi 6E. It also supports a 720p web camera, a fingerprint scanner, and a NumberPad. The device runs Windows 11 Home and has a single Zero-G Titanium color.

The ZenBook 14 OLED is also powered by 12th Intel processors (up to Intel Core i7-1260P CPU), along with Intel Iris Xe Graphics. It also supports 16GB of LPDDR5 RAM and 512GB of PCIe 4.0 SSD storage. The display is the same as the ZenBook 14X OLED and the laptop is 16.9mm thin.

It is backed by a bigger 75Whr battery and supports 64W fast charging. There’s support for a 720p web camera, Windows 11 Home, stereo speakers, Wi-Fi 6E, a fingerprint scanner, and a NumberPad. The ZenBook 14 OLED also comes with two Thunderbolt 4.0 (data, display, power), a USB Type-A port, an HDMI 2.0b, a 3.5mm combo jack, and a microSD slot.

The VivoBook 14/15 laptops come with the 12th Gen Intel processors, a 42Whr battery along with 65W fast charging, a fingerprint scanner, Wi-Fi 6 support, and more.

The ZenBook 14X OLED Space Edition starts at Rs 1,14,990 and the ZenBook 14 OLED has a starting price of Rs 89,990. Both are available to buy via ASUS Exclusive Stores, ROG Stores, Flipkart, and Amazon.