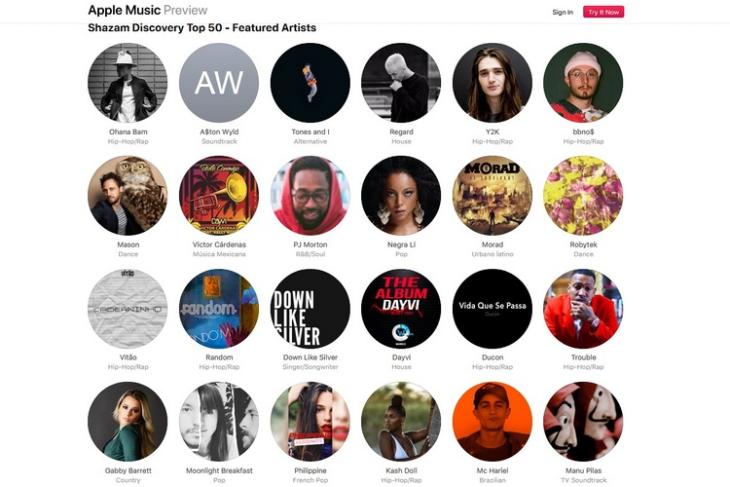 Apple Music on Tuesday launched the ‘Shazam Discovery Top 50’ – a weekly, global ranking of the trending tracks from top 50 artists globally. Based on data from Shazam, the music recognition app Apple acquired for $400 million in 2018, the chart will feature ‘up-and-coming songs from breaking artists’, said the company. The chart will be updated every Tuesday and is available to stream exclusively on Apple Music.

According to Apple, “The ranked songs are all at different points in their individual lifecycle and the majority of artists represented are emerging and up-and-coming. All are experiencing a level of momentum indicative of future potential of hitting the top of Shazam’s Charts, and show any or all of the following patterns: moving quickly through Shazam’s charts, growing rapidly, steadily and/or geographically”.

While there’s no exact word on how exactly the list is compiled, Apple says that it uses “Shazam’s proprietary algorithms (to offer) a unique predictive view on rising artists and reacting tracks to Apple Music subscribers”. According to Variety, however, the algorithm very likely takes into account the 20 million ‘Shazams’ per day to compile the chart. Shazams, in case you’re wondering, are the number of times a user pushes the button to identify an audio track.

As things stand now, the top three positions on the chart are occupied by ‘All Roads Lead Home’ by Ohana Bam, ‘Next Level’ by A$ton Wyld and ‘Dance Monkey’ by Tones and I. The chart currently only tracks trending artists in the US and 10 other unidentified countries, but will soon start featuring artists from more countries.