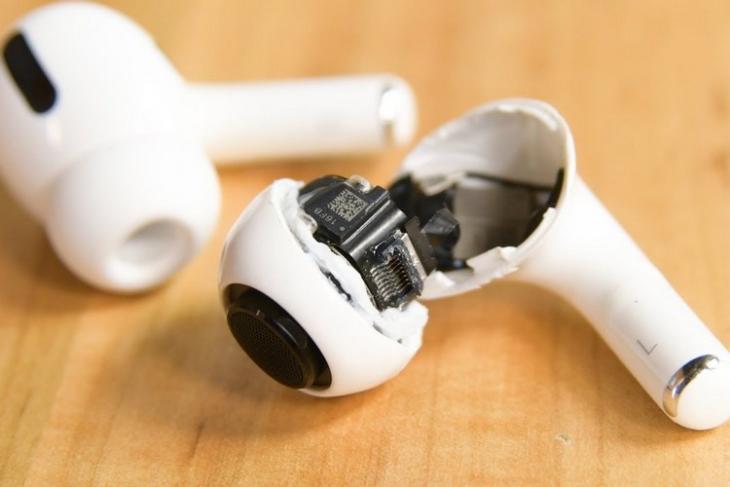 A teardown of the recently-launched AirPods Pro has confirmed that they are just as difficult to repair as their predecessors. Performed by iFixit, the teardown shows that the pods are made partly with recyclable materials, but remain as un-repairable as ever due to size and build process, which includes copious amounts of glue to hold everything together.

Awarding the noise-canceling buds an absolute ‘0 out of 10’ on the repairability scale, iFixit said: “While theoretically semi-serviceable, the “non-modular, glued-together design and lack of replacement parts makes repair both impractical and uneconomical”. Of course, it’s nothing new for the AirPods lineup, given that the original Airpods and AirPods 2 also received identical scores after being judged to be almost impossible to repair.

Interestingly, although all three generations of the device have been found to be equally difficult to repair, the teardown showed that there are several design changes in the latest version as compared to its predecessors. For one, the battery on the new model is glued just under the earpiece. As for the battery case, it uses a button cell unit (like those found in wristwatches) that’s rated at 1.98Whr instead of the 1.52Whr units found on AirPods 2.

Meanwhile, in a surprisingly candid statement, Apple reportedly confirmed to Wired (see embedded tweet below) that the AirPods Pro are not repairable, only replaceable, and are no better in this regard than the earlier versions. According to iFixit though, the latest model is ‘a tiny bit’ more repairable than its predecessor, but apparently not enough to shed off the ignominy of a ‘Zero’ score.

An update to Monday’s report: Apple has confirmed that the new AirPods Pro are no more repairable than previous versions of the wireless earbuds. The pods are made partly with recyclable materials but due to size and build process (i.e glue) it doesn’t repair. Just replace.

Airpods Pro With Noise Cancellation to be Launched Soon For $250: Report