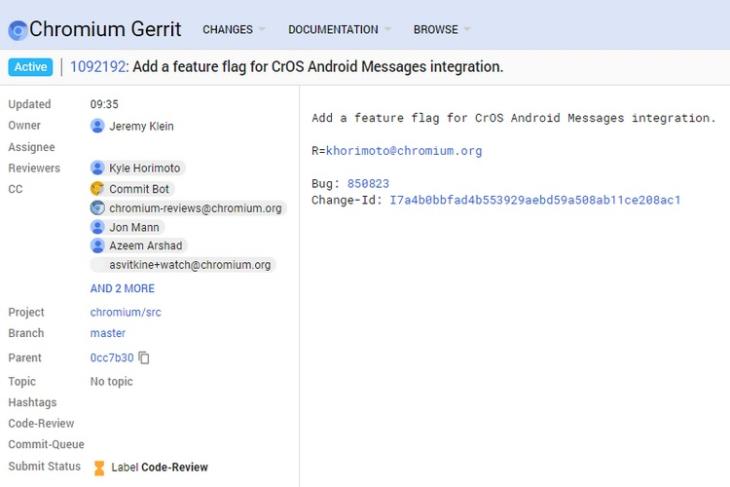 Earlier in February, teardown of an Android Messages APK revealed that Google is working on a web interface that will allow users to sync messages between their smartphone and PC to send messages from the web browser. Another feature called ‘SMS Connect’ spotted in the same month hinted at the integration of Android Messages with Chrome OS in the foreseeable future.

Fast forward to June, a new commit has now been spotted in the open source Chromium Gerrit which suggests that the integration of Android Messages with Chrome OS is on the horizon, however, it is not clear which version of Chrome OS will bring it.

Our guess is that users will be able to connect their Chrome OS device and Android smartphone to sync the messages handled by Android Messages, and also possibly send/receive text messages. Another commit mentions that the pairing process ‘is handled in the browser process’, which hints that a web interface might be at play here, that will allow users to send/receive SMS on their Chromebook over WiFi or mobile data connection.

As per APK teardown of an Android Messages APK, the web interface is called ‘Messages for Web’, and that it will have support for popular browsers like Google Chrome, Mozilla Firefox, Microsoft Edge, Opera, and Apple’s Safari. However, at this point, we are not sure how the Chrome OS-Android Messages integration will turn out, whether it will involve pairing via a QR code scanning process or something else entirely, but we’ll keep you updated with new information.