Building a custom PC is getting easier by the day and with the launch of AMD’s Ryzen second-gen processors, gamers and professionals alike can now build a high performance PC on a budget. Today we’ll be taking a close look at one of the most popular processors in the lineup, the Ryzen 7 2700 (Rs. 26,652), an octa-core processor that comes bundled with a Wraith SPIRE LED cooler. 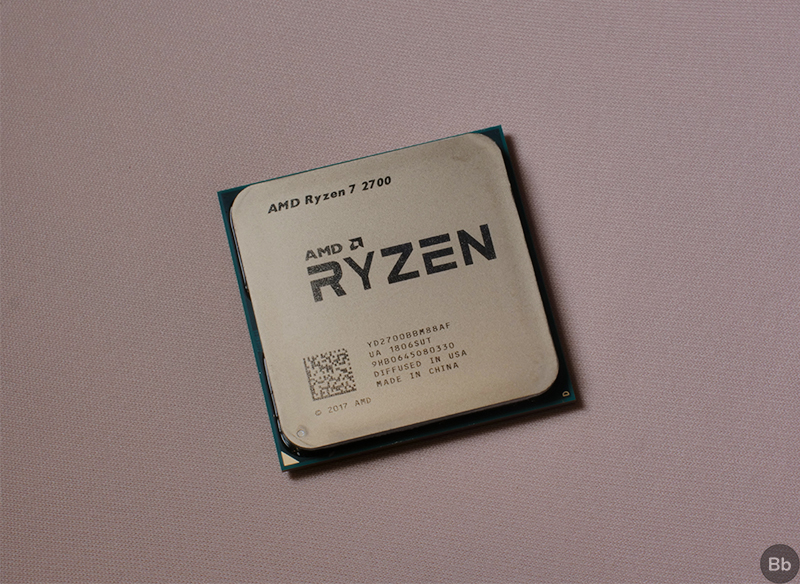 Built on a new 12nm LP process, the Ryzen 7 2700 from AMD has been clocked at a base clock speed of 3.2GHz, with a max boost clock of 4.1GHz. Before we get any further into the review, let’s take a quick look at the specifications of the Ryzen 7 2700:

The Ryzen 7 2700 packs in a number of impressive features that work towards improving the overall performance of the processor. These include:

AMD’s Extended Frequency Range or XFR technology, which also debuted with the first-gen Ryzen processors, has also received a significant bump. With XFR 2, overclocking enthusiasts will be able to overclock their processors way beyond Precision Boost limits. However, in order to make use of the technology, users will have to invest in a premium processor cooling system to achieve higher multicore performance. The technology is also fully automated and requires no user input, which means that even novice users will be able to overclock their processors as long as they have a decent cooler in place.

AMD’s second-gen Ryzen chip also feature something called Neural Net Prediction, which makes use of an artificial neural network to assess a user’s workload and anticipate the next steps to streamline the workflow in real time. The company claims that the Neural Net Prediction technology has the capability to significantly improve performance by staying a step ahead of apps and games to steer them towards the most efficient path.

The AMD Ryzen 7 2700 also comes with support for AMD’s StoreMI technology which makes use of software to combine the speed of an SSD with the capacity of an HDD to create a single, fast, easy-to-manage drive. The AMD StoreMI technology is part of every motherboard that features an AMD X399 or 400-series chipset, but users who have a 300-series chipset will have to pay an additional fee to purchase the Enmotus FuzeDrive software, which serves the same purpose. 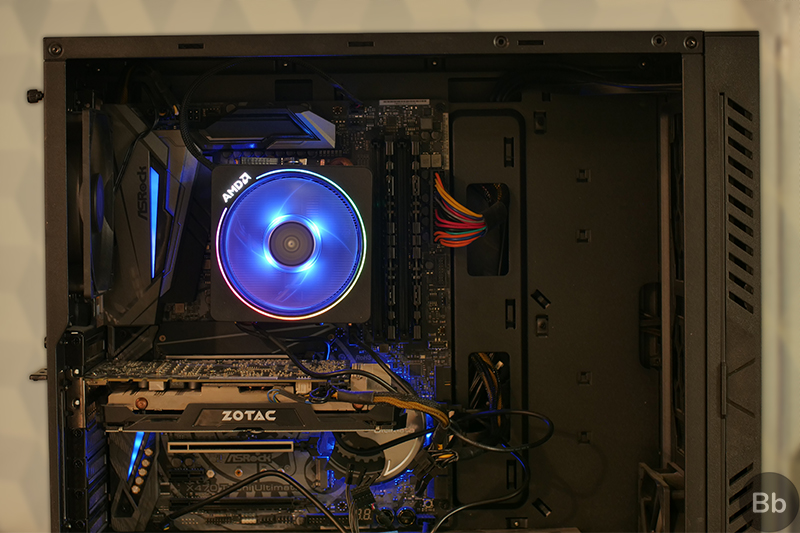 Our Ryzen 7 2700 test bench, on which we tested the performance of the processor by running a couple of popular benchmarks and demanding games, included the following components:

Note: For the purpose of this review, AMD provided us with a Wraith PRISM cooler. The product originally ships with a Wraith SPIRE cooler, which is a good option only if you don’t plan on overclocking the Ryzen 7 2700. In case you do intend to overclock the processor, you’ll have to further invest in a better cooling solution.

In order to test the performance of the Ryzen 7 2700, I first put it through a series of synthetic benchmarks. I ran the benchmarks, both at the processor’s base clock speed of 3.2GHz and at an overclocked speed of 4.0GHz. Here’s how the Ryzen 7 2700 performed while running the following benchmarks: 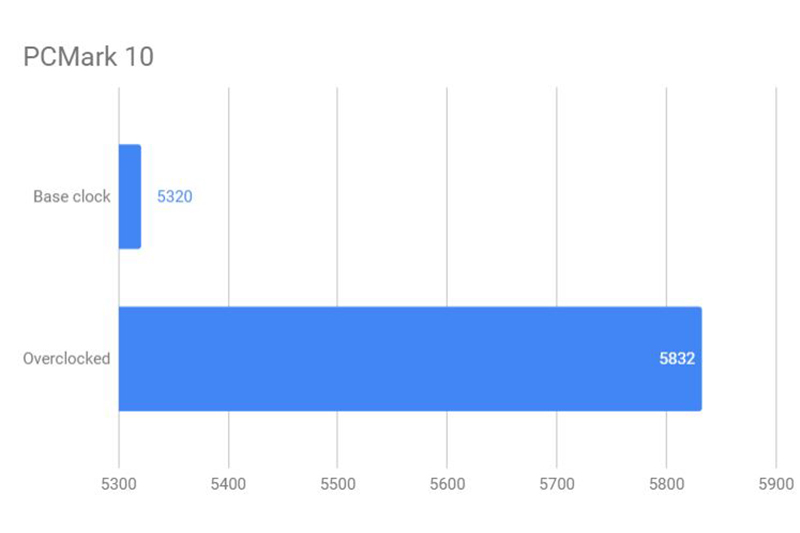 I started off my testing with PCMark 10, in which the AMD Ryzen 7 2700 managed to secure 5320 points at base clock speed. The processor received 8361 points in the Essentials tests,  6744 in the Productivity tests, and 7249 in the Digital Content Creation tests. Upon overclocking the processor to 4.0GHz, I saw a significant jump in the performance which was clearly reflected by the scores. Running at 4.0GHz, the Ryzen 7 2700 managed to score 5832 in PCMark 10, with better individual scores in all three types of tests across the board. 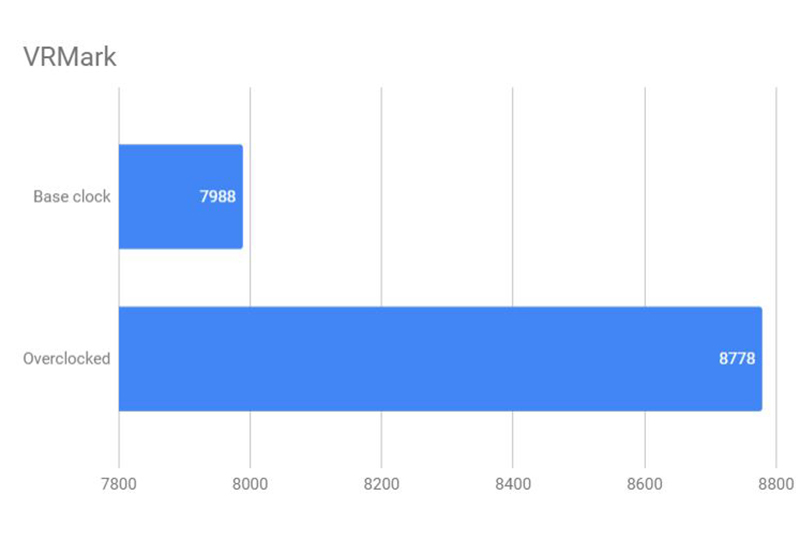 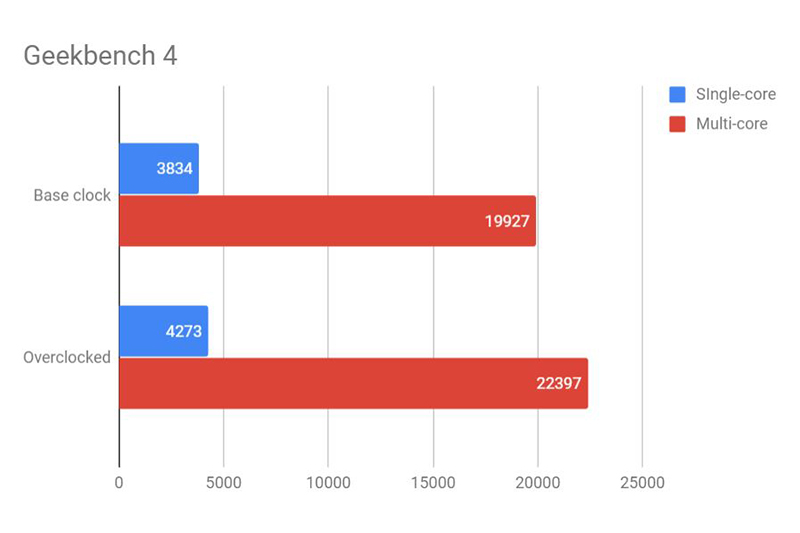 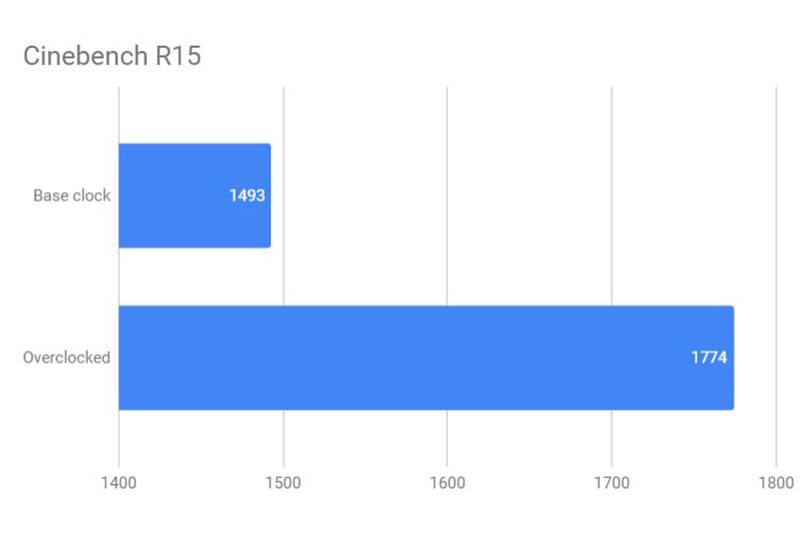 In Cinebench R15’s CPU test, the Ryzen 7 2700 managed to score 1493 points while running at its base clock speed of 3.2GHz. Once the processor was overclocked to 4.0GHz the system managed to score 1774 points in the same test, which goes to show how much of a difference overclocking can make. 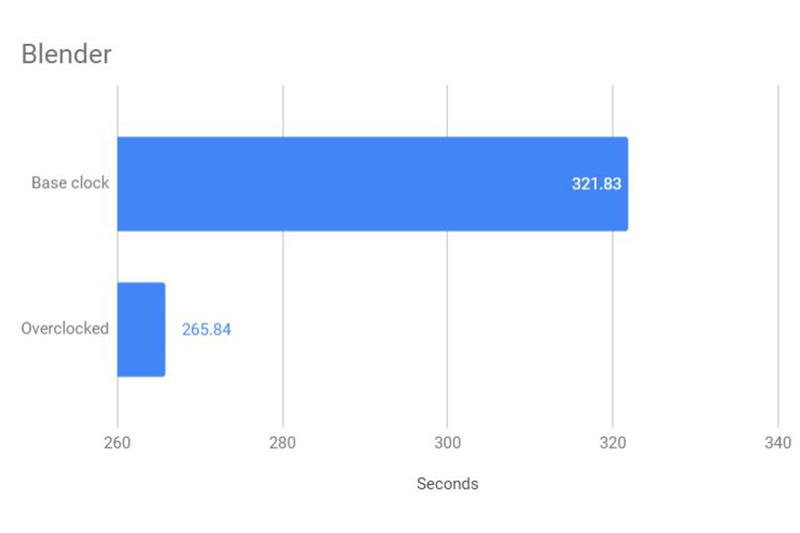 In order to test the Ryzen 7 2700’s rendering prowess, I rendered the BMW Benchmark by Mike Pan from the Blender demo archive. At base clock, the Ryzen 7 2700 managed to complete the rendering process in 321.83 seconds, which wasn’t too bad by itself. But the processor’s performance was further improved once overclocked and it managed to render the same image in 265.84 seconds.

Next up, I tested the processor’s gaming performance, once again both at its base clock speed and at a 4.0GHz overclock. While the differences in the benchmarking results were quite significant, the games in our test weren’t able to fully utilize the increased clock speed, which is why there was just a minimal difference in the scores. Which means that although you won’t see a major improvement in the gaming performance on most games, there will be a significant improvement in performance while running processor intensive games.  Here’s how the Ryzen 7 2700 performed while playing games: 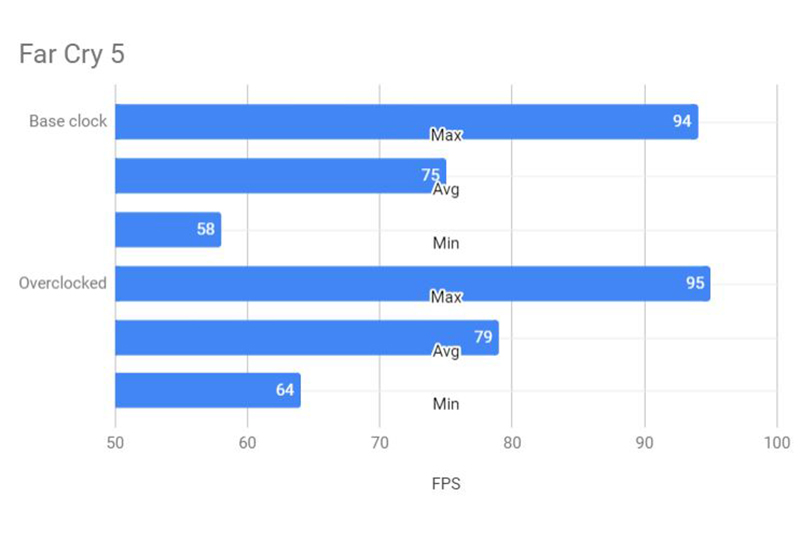 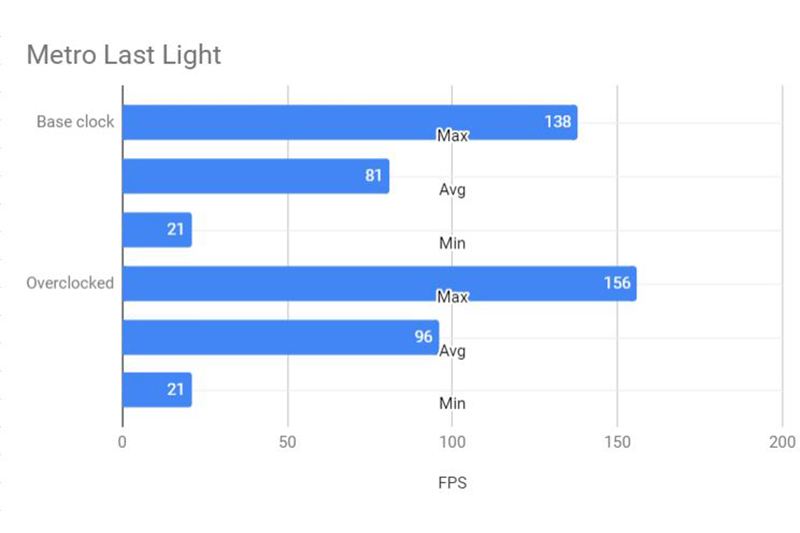 Even though Metro Last Light is quite a bit old now, its in-game benchmark is still capable of pushing any system to its limits. At base clock speed, the system managed to push an average of 81 FPS, going up to 138 FPS and as dropping as far down as 21 FPS, on the highest graphical settings at 1080p. Once overclocked, the system managed to push 96 FPS on average, going as high as 156 FPS and dropping down as low as to 21 FPS. 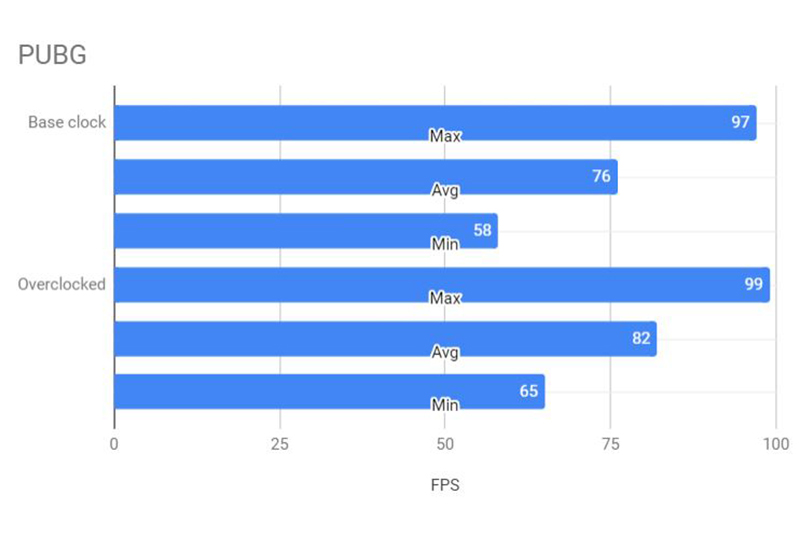 In PlayerUnknown’s Battlegrounds, the system managed to hover around an average of 76 FPS at the highest graphical settings and 1080p resolution. The system managed to push up to 97 FPS at times, but it even dropped down to 58 FPS when in large cities with a lot of players around. The difference in performance after overclocking was very minimal, with the system managing to push an average of 82 FPS, dropping down as low as 65 FPS and going all the way up to 99 FPS. 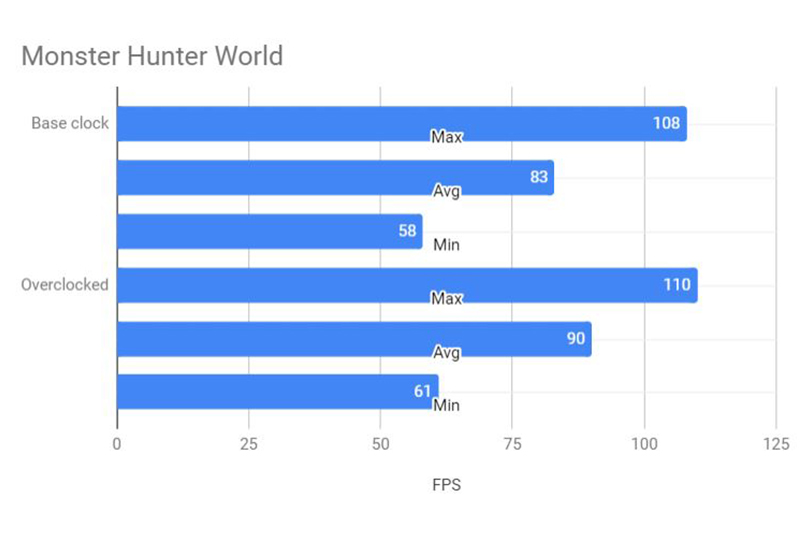 Finally, in Monster Hunter World, the system managed to push an average of 83 FPS at the highest graphical settings while running the game at 1080p resolution. The system was able to push a maximum of 108 FPS, which happened only while pointing the camera at the sky, and dropping as low as 58 FPS while trying to hunt monsters. Performance with an overclocked processor wasn’t a whole lot better, with the system managing to push 90 FPS on an average, while going as high as 110 FPS and dropping down to 61 FPS while hunting monsters.

For the price, the Ryzen 7 2700 (Rs. 26,652) is a great processor for both professionals and gamers alike. However, in order to make the most of the Ryzen 7 2700, you’ll need to overclock it and in order to do that you’ll further have to invest in a better cooling solution. The included Wraith SPIRE cooler isn’t ideal for overclocking and won’t be able to keep the processor cool enough at a higher clock speed. In case you don’t wish to overclock the processor, it would be a wiser choice to invest in the Ryzen 7 2700x (Rs. 31,748), which has a higher base clock speed of 3.7GHz.

Well, that rounds up our review of the AMD Ryzen 7 2700. As I said previously, the processor is a great octa-core option for professionals and gamers on a budget. Not only is the processor capable enough to handle most AAA titles with relative ease, it’s 8-cores and 16-threads ensure that it’ll be able to run even the most CPU-intensive applications without a hitch. However, to get it to its optimal performance, you’ll have to overclock the processor and if you aren’t comfortable with overclocking or aren’t familiar with the procedure, then you should consider the slightly more expensive Ryzen 7 2700x.