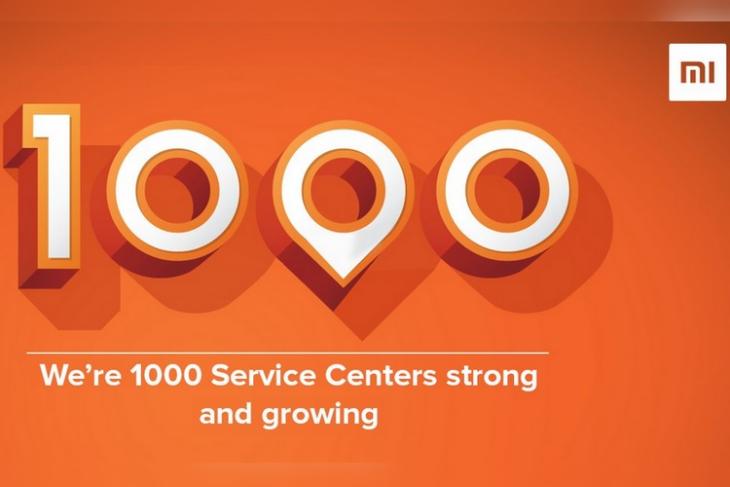 Xiaomi India has today announced that the company now has 1,000 service centers in India located across 600 Indian cities, alongside 500 authorized service centers for its Mi TVs. In a series of tweets posted today, the Chinese company claimed that Mi India now has one of the largest service networks in the country.

The company also revealed a host of other key stats which show Xiaomi’s impressive growth trajectory in India.

Mi fans! We are extremely proud to announce that we now have 1000 service centres across 600 cities in India! And with 500 authorised service centers for Mi TVs, we now have one of the largest service networks in the country. #1SmartphoneBrandXiaomi pic.twitter.com/EadSeOx2Ua

Xiaomi further revealed that 95% of all service complaints in India are resolved within 4 hours, while 85% of them are addressed in just around 2 hours.

We are also continuously working to improve the quality of service offered to you.
· Our Field Failure Rate (FFR) is less than half of the industry average. This highlights the impressive quality & reliability standards of our devices. #1SmartphoneBrandXiaomi pic.twitter.com/cZuKZ2hXzA

The company further added that it has received a score of 86% when it comes to CSAT (Customer Satisfaction) scores, setting an industry benchmark in the process. “After-sales is one of the most important functions for us. We promise to continuously provide the best in class experience and achieve customer delight for all our India Mi fans!”, Xiaomi India tweet.

Xiaomi further added that the company’s Field Failure Rate (FFR) is less than half of the industry FFR average, which is a mark of the impressive quality and the superior reliability standards exhibited by Xiaomi devices.

We also have introduced multiple initiatives to ease the service experience for our customers. Among them are the E-token system, online tracking on https://t.co/nVqFSYuXIq, & TV installation e-services. We are among the first companies to do so in India. #1SmartphoneBrandXiaomi

As per a study by Red Quanta, Xiaomi has also been crowned India’s No. 1 company when it comes to providing the best after-sales service among the 10 best brands in the country. Moreover, Xiaomi also lays claim to be the first company to offer services such as an E-token system, online tracking on the official Mi website and TV installation e-services among others.