Skip to content
Home News Twitter’s New iPad Interface Is Nice, but It Could Be Better 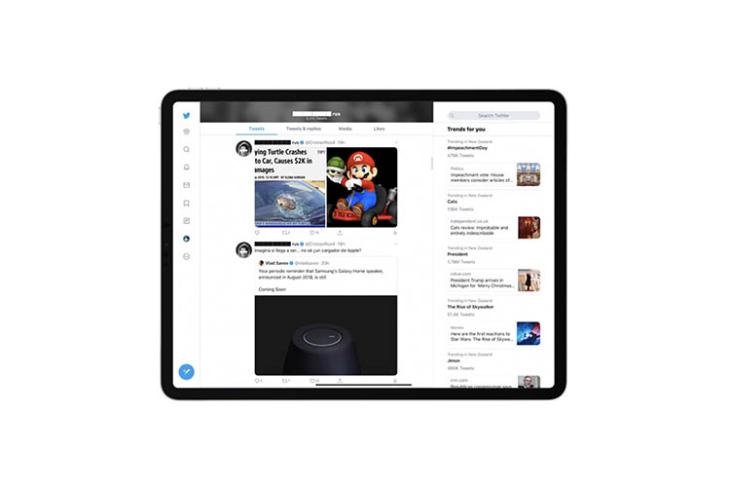 For the longest time, Twitter’s iPad app has been little more than an absolute waste of screen real estate with the app showing a single timeline feed on the screen along with whitespace on both sides of the timeline. That problem was especially annoying in landscape mode.

The social media website is now making amends to the atrocious design choices it has made so far on iPads with a new UI rolling out to the Twitter app on iPads. With the new redesign, the Twitter app shows three different columns on the iPad screen, making much better use of the screen estate offered by the large tablet. The new UI looks a lot like the web interface, with the main menu moving to the left-most column, a central feed, and the right-most column populated with trends and other content.

Even though this new redesign is a solid improvement over what the Twitter app has been on iPad all this time, I wonder why the company didn’t offer something more like Tweetdeck, with customisable columns. That’s one of the main reasons I really like using Tweetdeck because I can add or remove columns and view content that I really want to see or keep a track of. Hopefully this is something Twitter will also work on in the future and we’ll get to see an even better user interface on the Twitter iPad app in the future. Also, while we’re talking about hopes and dreams relating to Twitter, editable tweets, anyone?

Anyway, the new redesign for the iPad app is rolling out now, although 9to5Mac is reporting that it’s rolling out “somewhat randomly”. That’s something we have seen with Twitter bringing new features to its apps and web interface as well, so it’s not that big a surprise. If you haven’t received the new interface on your iPad, keep an eye out, and your fingers crossed. In the meantime, check out our favorite Twitter tips and tricks to learn some cool new tricks.