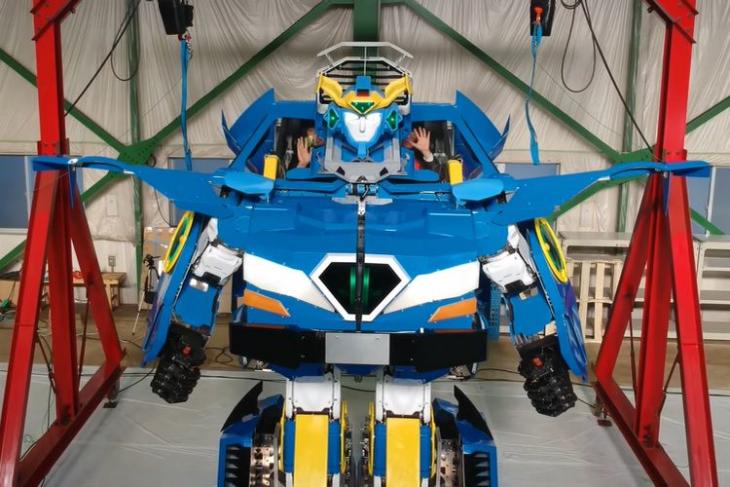 When planning to buy a car, people usually check its power, design, economy and comfort among other factors, and the ability to transform into a giant robot does rank high in your buying decision. Unless of course, you are a fan of the Transformers franchise, but that would just be wishful thinking. However, a few ambitious Japanese engineers and anime fans have created a robot that transforms into a car and can also carry two passengers just like an ordinary vehicle.

Brave Robotics is the company being the wonder machine called J-deite RIDE. It go from a robot to a fully-functional car in just around one minute.

It’s world’s first ‘rideable transforming humanoid robot’, Brave Robotics’ chief Kenji Ishida said.  “The robots I’ve seen in animation movies since childhood all had this kind of look and they transform into or combined with each other to become something else with people on board. So I grew up believing that robots had to be capable of such things, which became my motivation to develop this robot,” he added.

J-diete RIDE was developed in collaboration with Sansei Technologies alongside inputs from Kunio Okawawara, a designer whose mecha designs are used in anime franchises like the wildly popular Mobile Suit Gundam. But the machine is not just a fancy specimen of engineering acumen, as it can travel at a speed of up to 60 kmph in car mode, while in the robotic state, it can walk at a speed of 100 meters per hour and run at a theoretical maximum speed of 30 kmph.

J-diete RIDE has primarily been developed as a template for developing similar amusement park rides, and can now be hired by interested parties for exhibitions and promotional events. The machine is yet to be tested on the road or indeed outside the company’s factory cargo bay area, but will make an appearance at the ‘GoldenWeek DOKIDOKI Festa All Working Cars Assemble!’ event in May, and later at the IAAPA Attractions Expo in Florida in November.