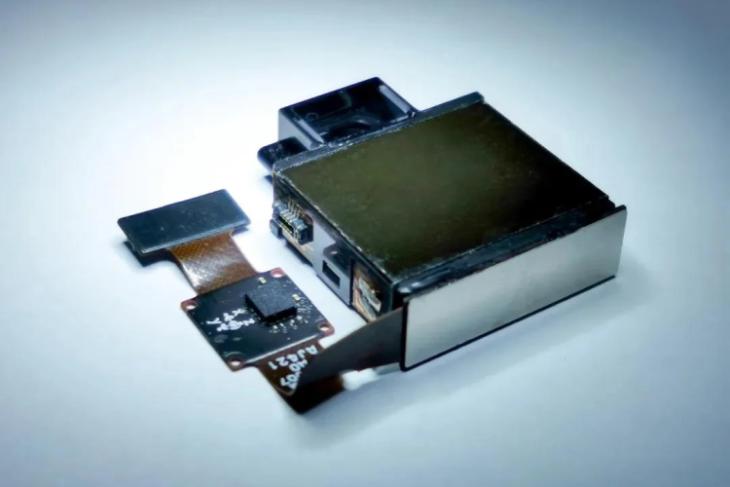 Periscope camera came into existence with the Huawei P30 Pro earlier last year. It was the first phone with a periscope telephoto lens system but we have since seen the same make its way to Galaxy S20 Ultra back in March. And now, Chinese firm O-Film today showed off a periscope camera module with continuous zoom functionality.

Most periscope camera modules in the market support X amount of optical zoom (up to 5x), hybrid zoom, and digital zoom that lets you photograph the moon. The lenses here are fixed at a certain focal length. O-Film, however, showed off a new prototype periscope module that can work smoothly between 85mm and 170mm (35mm equivalent).

You can see how this periscope camera works in the GIF attached below. The prism is optically stabilized and the collection of lenses move back and forth to offer you much higher magnification levels. A piezoelectric motor will be in place to accurately move the lenses in position for the required focal length.

O-Film claims that it can offer 3x to 7x magnification over your standard telephoto lenses. It can also manufacture periscope camera modules with 3x to 5x, 5x to 8x, and 3.5x to 9.5x zoom levels. The auto-focus module also moves along with the lenses to produce crisp photos at higher magnification.

The continuous zoom feature is not the only highlight of this camera module. O-Film also touts its latest periscope module to be the slimmest – at just 5.9mm thickness – in the market. This means the phone makes won’t have to worry about the cameras protruding out the back and offer variable zoom levels with this periscope module.

O-Film demoed the technology in China earlier this week and is now ready to officially make it available to phone makers across the globe.