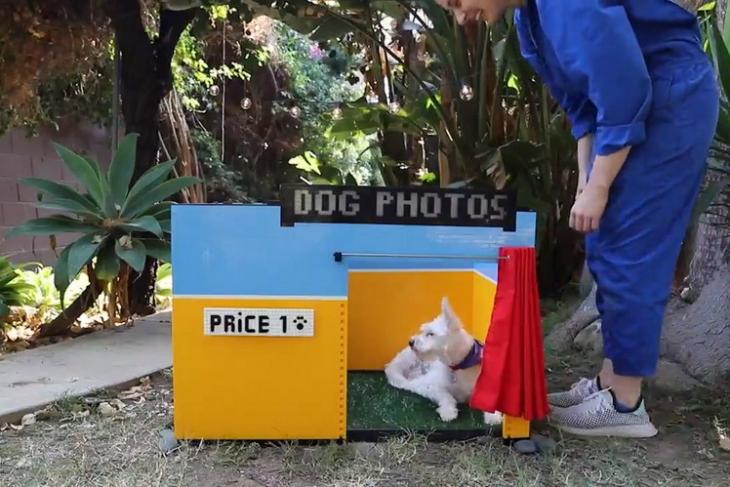 Even though Legos were originally designed for children, we have seen many creative adults make unique things using these multi-colored bricks. Now, robot-enthusiast and popular YouTuber, Simone Giertz, has made a custom selfie booth where dogs can now click a selfie by themselves.

Simone Giertz, if you don’t know, is a Swedish inventor and a multi-talented person who loves dog photos. She states that although dog pictures are quite popular on the internet, there aren’t many dog-selfies out there in the world. Because as much cute as they are, those paws cannot hold a smartphone and click the shutter button. However, they can push a pedal with those legs and that’s enough.

Giertz recently shared a tweet (below) in which she announced that she made a selfie booth for her dog. In this booth, the dog, Scraps, can easily take a selfie herself by pushing a custom Lego-made blue pedal with her paws.

I built my dog a selfie booth so she can take photos of herself by pushing a pedal with her paw pic.twitter.com/lpFTVZFlId

“She goes in there, there’s a little pedal that she can push with her paw, it triggers a camera that triggers a treat dispenser. She gets a treat, I get a photo, everyone’s happy,” says Giertz.

According to her, she came up with the idea when she was trying to make Scraps take a selfie on her phone by controlling her paws to interact with the screen. So, she took some Lego pieces and got creative.

She made an entire shelter-like encasing for the dog to enter. Inside this housing, there is a custom made trigger attached to a GoPro. Now, as the trigger is in the form of a pedal, the dog can just enter the premise and push the pedal to click a selfie. The idea is super-creative and kinda hilarious. However, when you see the results, it all makes sense.

She made a dedicated video showcasing the journey of making the “Dog Photos” selfie booth for Scraps. You can check it out right here.