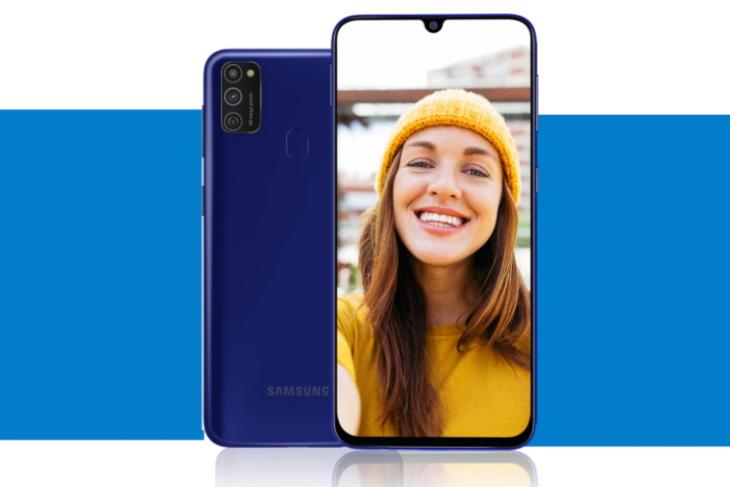 Samsung has today taken the wraps off its latest addition to the expansive Galaxy M-series, the youth-centric Galaxy M21. It’s a successor to the Galaxy M20 from earlier last year. No, the company didn’t launch the Galaxy M20s, hence, making the Galaxy M21 look like a considerable jump from its predecessor.

Talking about the design, Galaxy M21 looks a lot like the Galaxy M30s that launched back in September last year. It boasts a plastic construction with a rectangular camera bump and physical fingerprint sensor on the rear and most importantly, an AMOLED display on the front.

Yeah, the display is one of the key highlights of the Galaxy M21. It includes a 6.4-inch Full-HD+ Super AMOLED display with a waterdrop notch at the top. It boasts a 20:9 aspect ratio, 2340 x 1080p resolution, and Gorilla Glass 3 protection. The notch houses inside a 20MP (f/2.0) selfie camera.

Samsung has also upgraded the internals, with the Galaxy M21 being powered by the Exynos 9611 chipset. This is the same chipset that you will find on most of Samsung’s mid-range phones. It is coupled with up to 6GB of RAM and 128GB of storage, which is expandable up to 512GB via the dedicated microSD card onboard. 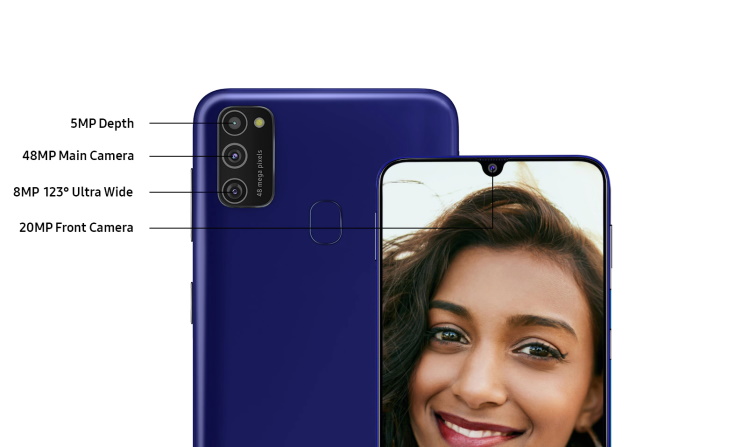 In the camera department, Galaxy M21 comes equipped with a 48MP (f/2.0) primary sensor. It’s coupled with an 8MP ultra-wide-angle camera with a 123-degree FOV and a 5MP depth sensor.

Another highlight of this budget smartphone is the massive 6,000mAh battery, which is coupled with 15W fast-charging support. There’s a USB Type-C port and a 3.5mm audio jack onboard.

Though Galaxy M21 comes in 2 configurations — 4GB+64GB and 6GB+128GB. Samsung has currently launched only the 4GB+64GB base variant at Rs. 12,999 on Amazon India. The device will be available in two color variants, namely Midnight Blue and Raven Black and goes on sale from March 23.