ChinaJoy 2018 is not an event a lot of you may have heard of. It is, however, one of the largest gaming events in Asia, and is held annually in China. This year, I had the opportunity to pay the event a visit and check out the hype for myself. However, apart from the massive (and incredibly exciting) showcases from Qualcomm, Samsung, HyperX, HP, Asus, Epic Games… you know, the usual suspects, one thing that caught my eye was that ChinaJoy had quite a number of incredible looking PC builds on display. Take a look:

Note: The names I’m using for these builds are not their official names. I’m just making them up based on my thoughts about them. 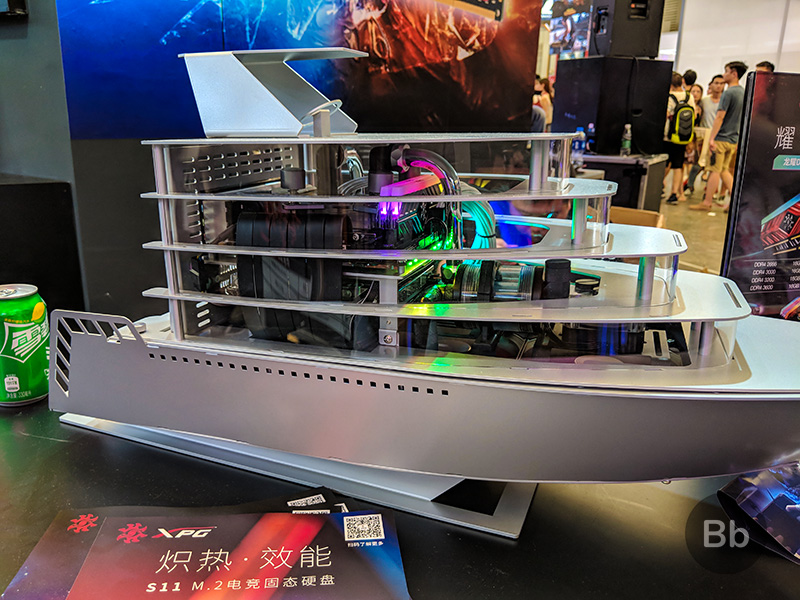 XPG did a pretty great job with the RGB RAM to add some color into what would otherwise be a black and white, albeit still awesome looking, PC. The specs here are an Intel Core i7-8700K processor paired with some stuff that I can’t understand since it’s written in Chinese. However, judging by what most other XPG builds featured, I’m sure those are two 8GB RAM sticks in there, and probably a 256GB SSD along with it. It has water-cooling, which is weird… because, you know, it’s a boat (get it? No? Okay).

XPG really wasn’t in a mood to let go of RGB at the event, and why should they? Gamers love RGB. This one features a blue LED strip along the chassis, some green-tints to the water-cooling, and, RGB exhaust fans, a CPU cooler that comes with its very own temperature read-out display, and, in my opinion, can be summed up in just the name I gave it – “RGB Overload”. Not that I don’t like it, I find it really cool.

It featured an Intel Core i7-8700K processor, an Nvidia GeForce GTX 1080Ti GPU, and those RGB RAM sticks are 8GB each, bringing it up to 32GB of RAM.

This one is from XPG as well, and they’ve gone with a red and black color scheme here that I personally really like. Plus it helps that the water compartments look like a section from the crew deep-sleep quarters of a futuristic spaceship (I’m not really sure how to describe it. Somehow, beehive doesn’t sound all that cool). 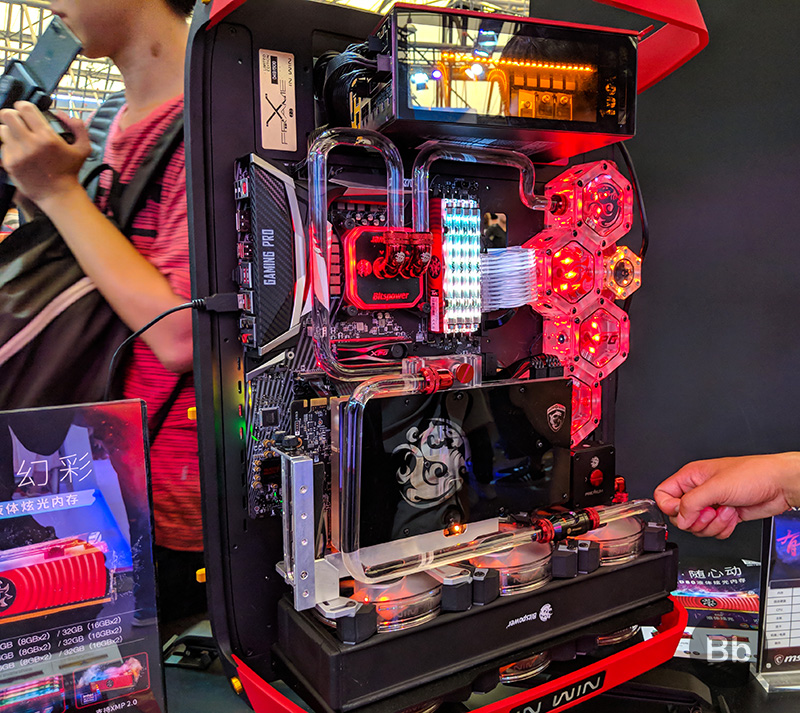 We’re out of XPG territory now, and this one is definitely one of the coolest PCs I saw at the event (specs not withstanding). This is a PC that’s not so much about what’s inside it, as it is about the really insane (and probably creepy at night) case that it’s using. I don’t want to try and describe something I can’t possibly put into words, so just take a look at this! 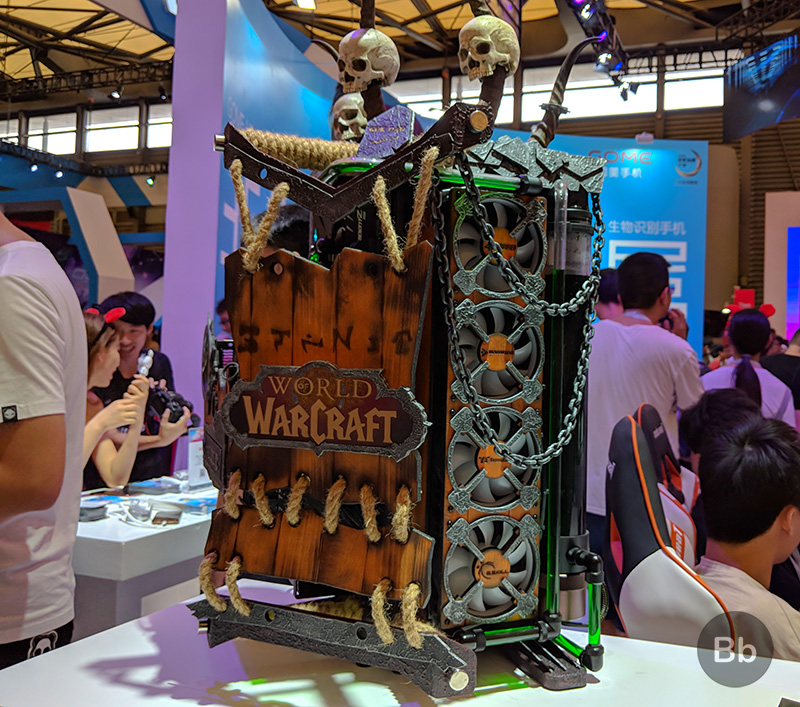 Even if you’re not a World of Warcraft fan, I’m sure you can’t help but appreciate the incredible amount of detailing on the case here. There are chains, there are fans that look decidedly steampunk, there are skulls on stakes, ropes, and what looks like (but I didn’t check) actual wooden panels on the side. It’s just awesome. There was no spec-sheet around though, so I can’t say what this skull-laden, chain-wrapped, wood-and-rope piece of beauty packed inside, but hey, appreciate it for what it looks like won’t you?

PUBG players unite! I know, I know, this PC doesn’t look nearly as incredible as the World of Warcraft one, but what did you expect them to do? Make a custom case with grenades, and a midi-kit on top? Perhaps adorned by an AK and M4 alongside it? Come to think of it, that would’ve been awesome, but I digress. There’s nothing out-of-the-world incredibly awesome about the looks, but look at that ‘Battlegrounds’ branding there. 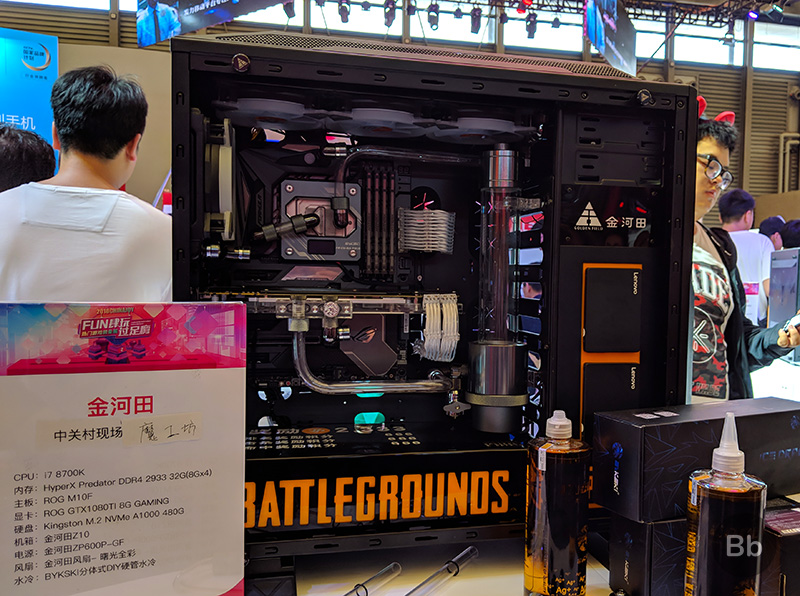 It’s not just about the looks though, this thing also packs in specs that will let you play PUBG on the best settings possible. There’s an 8th-gen Core i7 processor, 32GB of RAM, and a GTX 1080Ti with 8GB of GDDR5X memory. It has water cooling as well, because I’m sure it generates enough heat to cook that Chicken Dinner itself.

Yeah yeah, before you go all ‘Fortnite’ isn’t all that demanding, think about this, what Fortnite fan wouldn’t want a PC that has Fortnite graphics on the panel? I know I would, and I still do (hey, if the builders are reading this, send me this one would you? I’ll love you forever). Anyway, thanks to the panel outside adorned with the Fortnite graphics, this PC doesn’t show off its internals very much, and a side pic I took didn’t come out much better, but you can see the fans with their blue-LEDs, 3 more white coloured fans for the GPU, RGB RAM (seriously, RGB is everywhere in ChinaJoy), water cooling, and I don’t know what those yellow and silver strips of cardboard are for (though I’m assuming they’re meant to represent the building mechanics of the game), but they certainly don’t add much to the appeal. 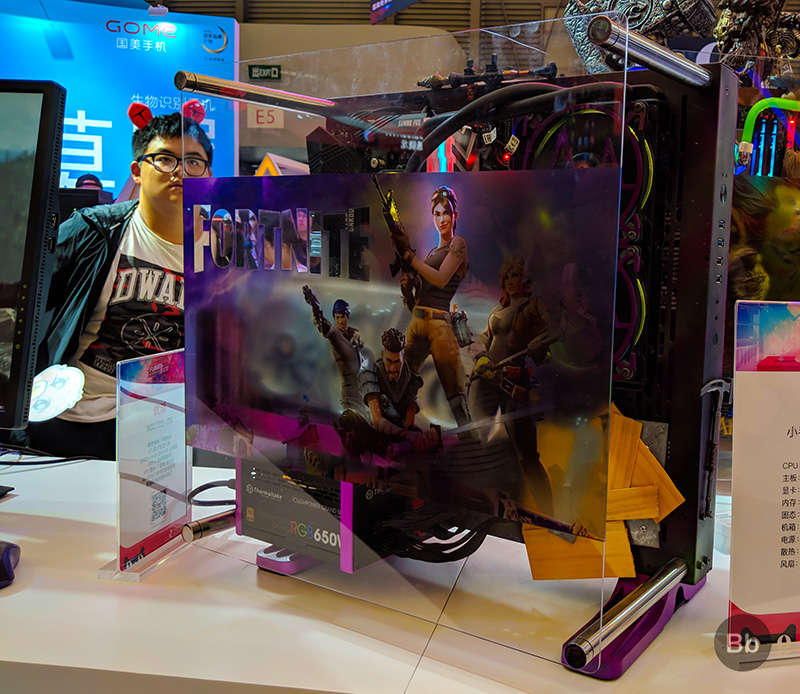 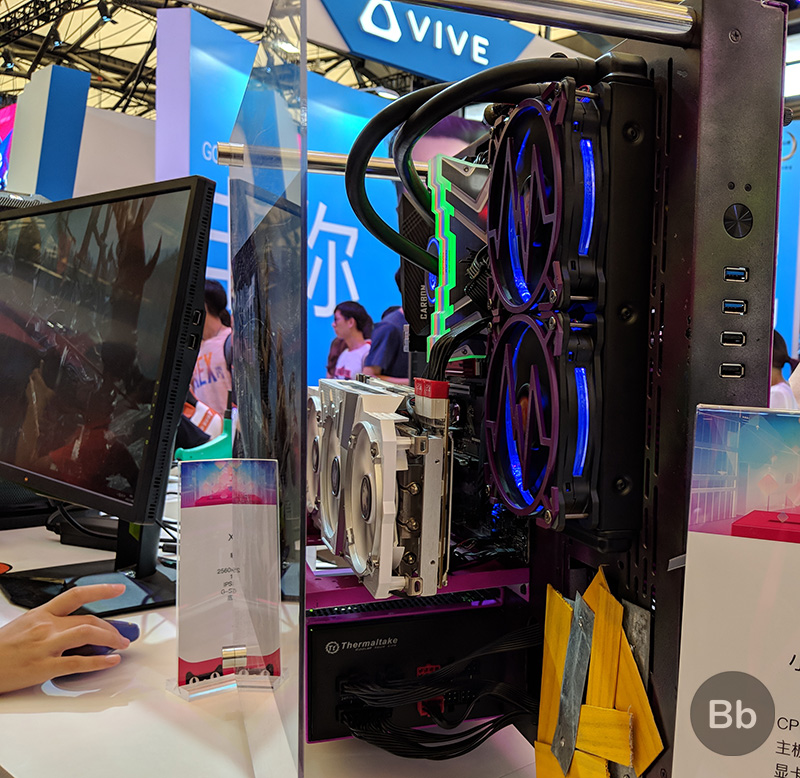 Specs wise this one packs in considerable horsepower, even if the processor is an odd choice. There’s an 8th-gen Core i3 here, paired with 16GB of RGB RAM, a 240GB SSD, and GTX1060 — all of which should suffice for some sweet Fortnite action. I don’t know if I’ll still get a Victory Royale, but I’m sure I’d die in a sweet 60+ FPS.

There were other incredible PCs at ChinaJoy 2018 as well, and if I took pictures of all of them I would’ve needed a lot more time (and honestly, a lot more energy because I was dead tired). Either way, ChinaJoy 2018 was a lot of fun, even if I wish I had an electric-bike to move around inside the event area, and if any of you guys were there, share your experience in the comments will you?

Disclosure: This correspondent’s travel and stay to cover ChinaJoy 2018 was sponsored by Qualcomm.