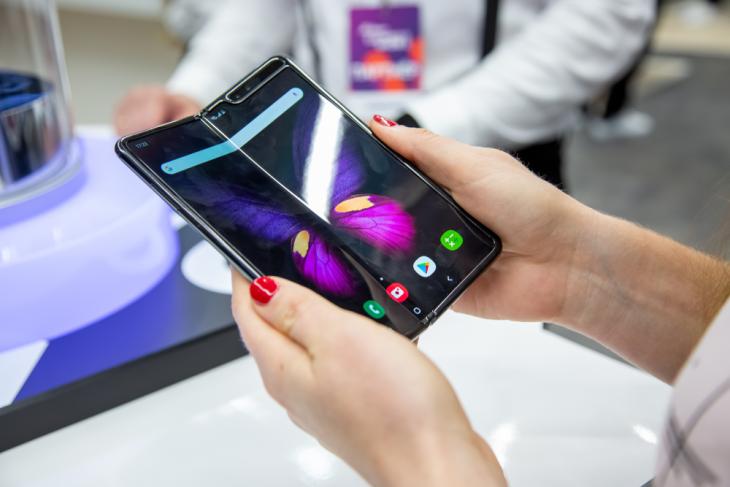 We assumed Samsung W20 5G would be the Korean giant’s second foldable phone but it was only a rebranded Galaxy Fold with minor upgrades in tow. Now, rumors of Samsung working on its second foldable, which is being dubbed the Galaxy Fold 2 are flooding the Internet. And it looks like the Galaxy Fold 2 will feature a clamshell design similar to the new Motorola Razr and retail at a more affordable price tag than the current-gen Galaxy Fold.

As per a report in The Korea Herald, Samsung is going to follow Motorola’s lead and will launch a foldable phone with a clamshell design. It is expected to look and perform very similar to the foldable Motorola Razr unveiled earlier in November, said sources aware of the developments.

The Korean giant first showed off the new form factor on stage at this year’s Bixby Developer Conference. Shown in the teaser below, with a clamshell design and a punch-hole selfie camera, is probably the Galaxy Fold 2. It will be unveiled sometime in 2020.

Speaking of the price tag, the report further adds that the Galaxy Fold 2 will retail at almost half the price of the current-gen Fold. Samsung is rumored to price the new Galaxy Fold at around $840 in its home country. The price will most likely go upwards of $1000 in global markets, as per the industry sources.

Now, are you wondering about the price difference? How is Samsung going to bring down the price to almost half of what it was before? Sources suggest that the clamshell design will feature a smaller foldable screen. When you couple this with the reduced cost of production for the foldable screens in 2020, it could potentially bring the price down to around $1000.

There’s currently no word on when Samsung will launch its second foldable smartphone, however, we expect the Galaxy Fold 2 to debut alongside the Galaxy S11 series at MWC 2019 in February next year.