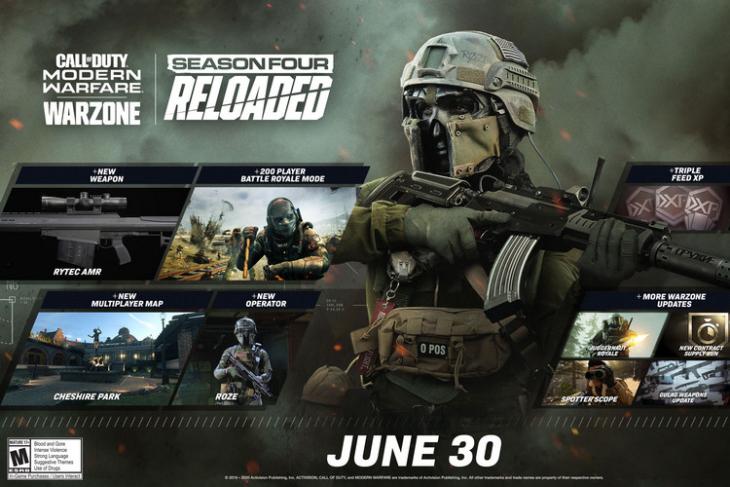 Activision’s free-to-play battle royale game, Call of Duty: Warzone, now has 200-player lobbies in Multiplayer mode. As part of the plan, the game will now allow 50 teams in quad-mode contests. The changes have just started rolling out as part of the Season Four Reloaded update.

In a blog post on Monday, Activision said: “This new player count makes Warzone an even bigger Battle Royale experience. So get ready to drop in alongside 199 other members of this millions-strong community to cause havoc!”. Some reports suggest that the new 200-player mode will be available only for a limited time. However, Activision’s official blog post doesn’t say anything to that effect.

The update comes with a download size of 22-36GB on PC for owners of the full version of Modern Warfare. Players on consoles will have to install an additional 3.5GB file and then reboot to access Multiplayer. Existing free-to-play Warzone players will have a download size of approximately 22GB-30GB. However, once the update is installed, they’ll notice a reduction in the overall footprint of the game on their machines, the company said.

The incoming update also brings a number of other goodies and gear. You can pickup ‘Supply Run Contracts’ that can get you discounts on Buy Station purchases. There’s also the new ‘Juggernaut Royale’ mode that will see care packages being dropped randomly on the map. Inside these packages, players will find a Juggernaut Suit, giving them additional health, guns and more.

It is worth noting that both the 200-player battle royale and the Juggernaut mode were spotted in the game during the Modern Warfare free access weekend earlier this month, just days after the Season 4 update started rolling out.