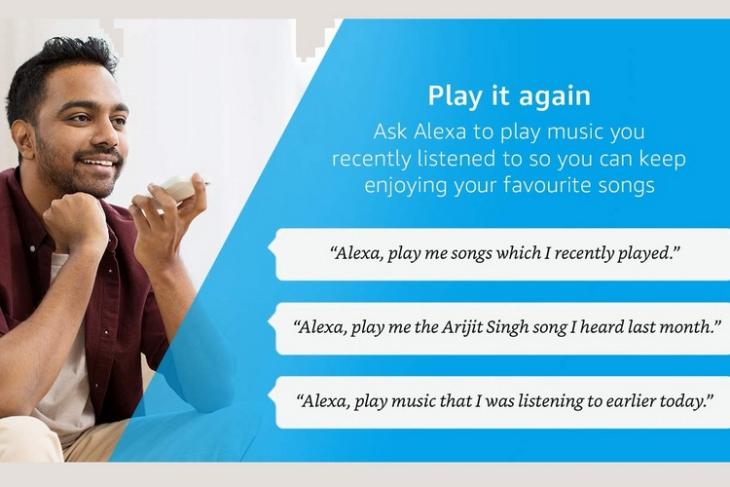 Amazon has announced the launch of new Alexa-powered features for Amazon Prime Music that the company says will make it easier to track and explore music while significantly enhancing the day-to-day listening experience. The features are available only on Amazon Prime Music, both on the mobile app as well as on Echo devices. Included with Amazon Prime subscriptions, Prime Music was launched in India earlier this year.

According to the company’s official press release, the update enables users to not only replay tracks they were listening to recently, but also revisit songs they used to listen to, but haven’t heard in a while. Users will be able to ask for their favorite songs by artist, genre or time, with commands such as, “Alexa, play music that I was listening to last week” or “Alexa, play me the Arijit Singh song I was listening to three weeks ago”.

Another new feature is the ability to easily create new playlist(s) or add to the existing playlists through voice commands without having to search or browse through the entire playlist. “Alexa create a new playlist from this song”, or “Alexa, add this song to my workout playlist” are just some of the examples of voice commands that can be used for the purpose.

In a press statement, Sahas Malhotra, the Director of Amazon Prime Music India, said that the new features are the result of user-feedback, and expressed hope that it will make music consumption via Amazon Prime Music more pleasant experience. According to him, the update makes Alexa more like a friend that knows exactly what the users needs, and is able to play any track just based on a simple voice command.

“With the launch of these new ways to discover music, we have made it easier than ever to make the music listening using your voice simpler and easier with Alexa being more like your best friend who understands you well and knows what you want to listen to – all just by asking! With the ad-free music streaming now coupled with the power and simplicity of Alexa Voice controls, Amazon Prime Music will continue to offer simpler, easier and more fun ways to listen to your favorite music”, he said.