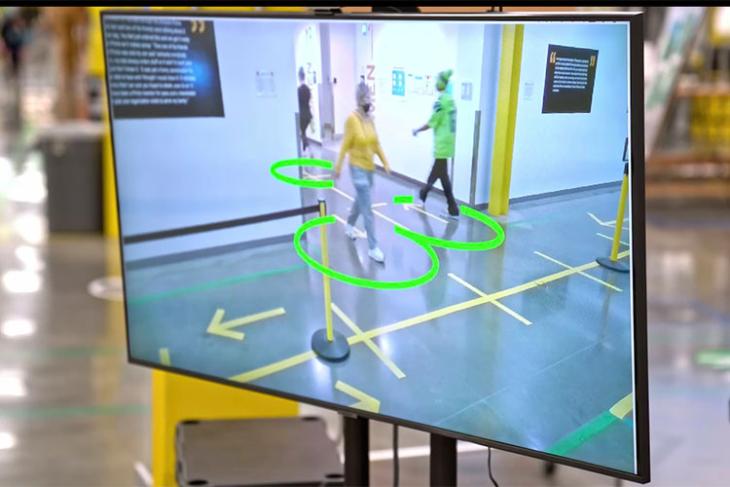 Amazon has come under a lot of scrutiny for failing to protect its workers during the COVID-19 crisis. However, in an attempt to make its warehouses safer for its employees, the company now has a new solution. Amazon is deploying machine learning algorithms to warn its employees when they come too close to each other.

The company’s new ‘Distance Assistant’ comes with depth sensors, a TV, and a camera to track worker’s movements. The machine learning algorithm keeps a track of employees positions and their distance from each other. If a worker comes too close to another, the circles around their feet flash red on the TV screen. Otherwise, the circles remain green.

The ‘Distance Assistant’ is completely self-contained, by the way, so it can be easily moved around as needed, and quickly deployed anywhere.

As mentioned by Brad Porter, vice president of Amazon Robotics in a blog post, Amazon is currently testing these devices in a handful of its facilities. However, the company is planning on rolling them out to hundreds of its warehouses in the coming weeks. Moreover, the company is saying that it will open-source the technology so anyone can use it. Mostly though, Amazon is hoping this will be used by other companies to quickly create similar ‘Distance Assistants’ for their requirements.

All that said, the device does raise some eyebrows. Privacy advocates are claiming that technologies like this will normalise a higher-level of surveillance in our day to day lives. Amazon itself has been at the center of criticisms for gruelling work conditions at its facilities.