If you are one of the many users of Reddit, you must have noticed how much better the comments section on Reddit looks as compared to that of YouTube. Keeping this in mind, an extension called AlienTube was developed that embedded the comments section of Reddit in YouTube. Sounds cool, right? Being an active user on Reddit, I had this extension installed on my Chrome browser. Sadly, the developer of the extension has been warned by Google to not push any further updates for the same, thus rendering it unworkable with the new design of YouTube. So, if you are looking for an AlienTube alternative that works with the new YouTube design, I have just the right extension for you. Before we start, let’s first find out what AlienTube actually offered.

AlienTube did a simple yet very useful task of replacing the YouTube comments section with that of Reddit. Well, not exactly replace, as you could switch between the different comments sections by clicking on the Google Plus logo (G+) present at the top-right corner. Embedded directly from Reddit, this allowed you to perform actions like saving, refreshing, giving gold, reporting, upvoting/downvoting, and commenting on Reddit directly from YouTube. The AlienTube extension was certainly a very very handy extension for all Reddit users out there. 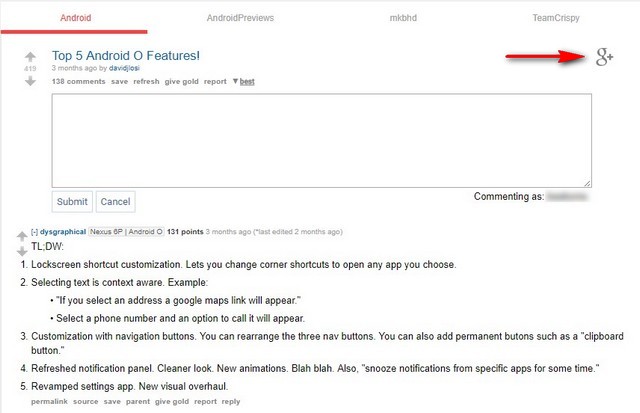 Though I tried many different extensions that looked promising, most of them didn’t work in the new YouTube design. Epiverse (Chrome, Firefox) seemed to be the only extension that served the same purpose as AlienTube, while also working with the new YouTube design. It is free and is not limited to YouTube like AlienTube. This means that instead of just YouTube videos, you’ll be able to see the comments on any webpage that is ever shared on Reddit.

The first and the most major difference that you’ll notice is the presentation. While AlienTube replaces the comments section of YouTube with that of Reddit’s, Epiverse lets you view the Reddit comments from within the extension. If any webpage that you visit has ever been shared on Reddit and that post has some comments, you’ll see that counter on the extension’s icon. Now when you click on this icon, you’ll see a window overlay that shows the Reddit comments. Similar to AlienTube, you’ll find tabs for the different sub-reddits on which that webpage was shared – each of which can be visited with just a single click.

One thing that lacks in Epiverse when compared to AlienTube is allowing you to comment on Reddit posts from within the extension. That being said, if you register an account on Epiverse, you can use that to comment on the corresponding Epiverse threads that can be found right alongside the Reddit ones. Note that they have much less members than the Reddit community and you may very well be the only one commenting on a particular webpage. 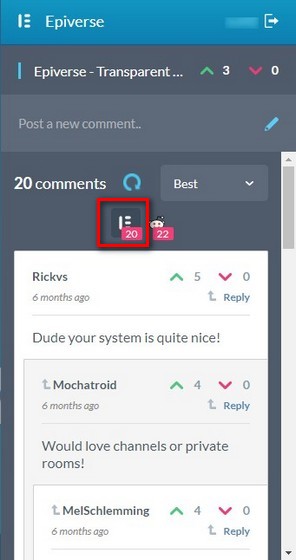 To wrap it up, while Epiverse doesn’t offer all the features that you get with AlienTube, it works with the new YouTube design and is the only one that stands any chance as an alternative.

SEE ALSO: 10 Best Chrome Extensions and Apps for Reddit You Should Use

Switch to The Best AlienTube Alternative

While AlienTube is a great way to embed Reddit comments in YouTube, it doesn’t work in the new YouTube layout. However, with Epiverse, you can get that work done but with a slightly different approach. I had myself switched to Epiverse a while back and haven’t been disappointed with it. If you used AlienTube, I would suggest you to make the same switch. And in case you know of any other extensions or add-ons that can be used as an AlienTube alternative, do let me know in the comments section below.