WhatsApp has recently been testing a lot of new features with its Android and iOS beta users. It rolled out the advanced search feature, animated sticker packs, and more over the past month or so. Today, WhatsApp has started rolling out picture-in-picture mode support for Indian social media platform ShareChat.

First reported by reputable tipster WABetaInfo, this feature has been in the works for close to two months now. ShareChat has now joined the likes of YouTube, Instagram, and Facebook to get support for picture-in-picture mode. This means, if someone was to send you a ShareChat video, you will be able to view it in a floating window within WhatsApp itself. The video will continue to play over the chat window and you can go back to texting your friend or navigating through the messaging app. 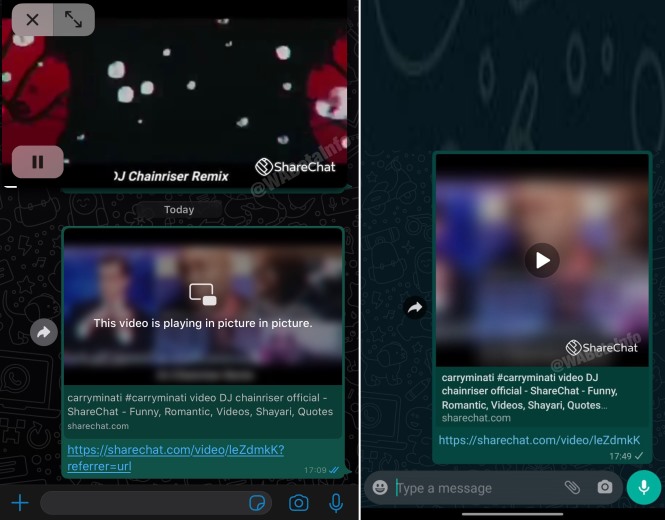 ShareChat videos support picture-in-picture mode in WhatsApp beta build #2.20.197.7 and above on Android and build #2.20.81.3 on iOS. The app integration doesn’t seem to be live for me even though I’m running the beta build #2.20.197.11 on Android. You may have already experienced the floating video with other apps, but we’ve attached a screenshot for your reference.

Apart from the ShareChat integration, the latest iOS beta (build #2.20.90.21) has also revealed a new feature that’s currently under development. It’s called multi-wallpaper and will allow you to set different wallpapers for different chat windows. This is a very simple feature that should already exist in WhatsApp but isn’t there yet.

The multi-wallpaper option will also enable you to select the wallpaper that needs to be applied when switching the system theme – light or dark. WhatsApp might also enable you to adjust the brightness of the wallpaper, says the report. While chat customization is a great addition, the expiring messages feature is what I’m most excited to check out whenever it goes live.