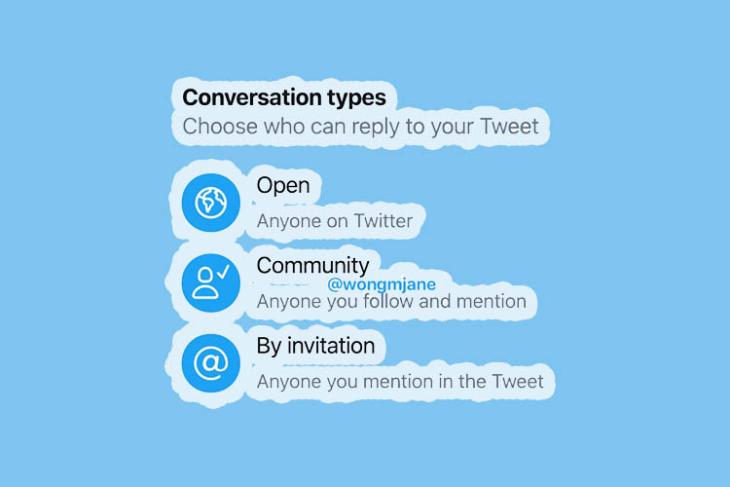 In a move that free-speech advocates have slammed for possibly restricting healthy debates and adding to the increasing number of echo chambers on the platform, Twitter is apparently testing a new feature that will enable users to lock down a conversation by choosing who is – and who isn’t – allowed to reply to their tweets.

Believed to have been first spotted by renowned software reverse engineer, Jane Manchun Wong (@wongmjane), the feature is currently in its testing phase on the Twitter website, but it’s unclear as to when it will be eventually rolled out to the broader public. As can be seen from the screenshots posted by Wong, the feature is called ‘Conversation Types’ and, comes with three options that allows users to specify who can respond to their tweets.

Twitter is working on implementing Conversation Controls in the web app pic.twitter.com/DHQfHbxJt1

Originally announced at the CES tech show in January by Twitter’s director of product, Suzanne Xie, the controversial new changes come in the form of a new setting that will allow users to choose who can participate in a conversation thread every time a tweet is posted. However, the way Twitter is now implementing it differs somewhat from how it was described at the press conference last month.

While Twitter had originally announced four options, including Global (default setting allowing everyone to respond), Panel, Group and Statement (fully locked-down option preventing anyone from answering), the company now seems to have done away with the final option altogether and renamed the rest to Open, Community and Invitation with minor tweaks, although the structure remains pretty much unchanged.

According to Wong, folks will still be able to see locked-down tweets and even quote them if they want, but they won’t be able to reply and be a part of the conversation if the OP so decides. It’s not immediately clear how the change will affect conversations on Twitter, but it will no doubt be a fundamental change to how the platform has worked since its inception.