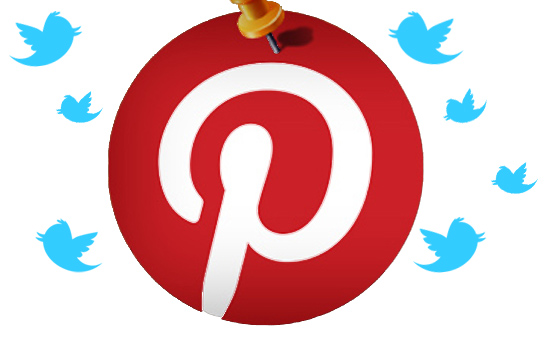 It is well said that a picture is worth a thousand words and if a picture is competing against 140 characters only, no need to say what will be the result.

Though Pinterest and Twitter are different kind of websites, one acts as a virtual pinboard whereas later serves as a microblogging platform.

But, both acts as referral traffic generators too and that is the area in which large number of the users are interested in.

According to recent study by Shareaholic In January 2012, Pinterest accounted for 3.6% of referral traffic against Twitter’s 3.61% with only 10.4 Million users as compared to Twitter’s 200 Million users.

Open your Twitter account for just 30 seconds and sit idle in front of it, you’ll see a lot of incoming tweets adding up asking for a click so that you can see them and with that speed of incoming tweets there is a very less possibility that you will see tweets that you have missed while you were not online.

So, the Tweets that matters are the ones that are posted when you are online.

The maximum that you can do to a tweet so that it falls in some category or list is to add a hashtag at the cost of the limited characters and also creates confusion with the link if it contains any.

Whereas, Pins can be categorized by the users on Boards which are further categorized as per Pinterest’s available categories and there are very rare chances of a Board not falling in any of these categories.

Twitter though allows media in Tweets but what a Tweet is all about is defined by text.

Whereas, Image is what defines the Pin which is far more interesting and easy than reading a tweet.

Only your followers will see your tweets in their timeline and that limits the visibility of a tweet.

Following Someone on Twitter means that you’ll have to see all the tweets from that user.

But, In Pinterest you have the choice to follow a board of the user that you are interested in rather than following the user and get bombarded with the stuff that doesn’t interests you.

Tweeting won’t be replaced by Pinning but after some time Pinning would be preferred over Tweeting for sure. Do you agree?

Curalate Lets You Know Who’s Pinning About Your Brand